You are hereby commanded to plant this scrappy fall bloomer 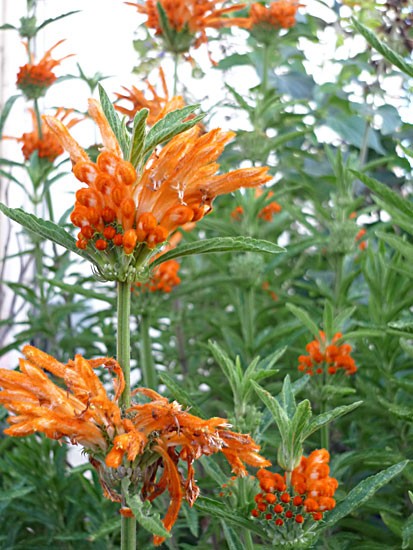 Here's the problem with a plant that blooms in the fall: You might never see it in bloom in the garden center, and as a result you might never be inspired to plant it. The best fall-blooming plants tend to be tough, shrubby, perennial-type things that just don't look very glamorous in a plastic pot. They don't exactly sell themselves. You have to know what you're looking for, and you have to get them in the ground and give them a couple years to get going.

But most of us like to shop for plants in the spring, which means that our gardens are filled with the spring and summer-blooming flowers that we fell in love with during those spring trips to the garden center. That's okay as far as it goes, but if you always shop for plants that way, you might miss out on the glorious autumnal delight that is leonotis.

Also called lion's tail (or, weirdly, lion's ear), this is a genus of about 40 plants in the mint family that produce crazy fuzzy whorls of tubular orange flowers in the fall. The species you see for sale most often is Leonotis leonurus, which grows to about five feet tall. Mine starts blooming in October, which works out perfectly because the screaming orange flowers are the exact color of those plastic jack-o'-lanterns kids collect their candy in at Halloween. This is not a subtle, mild-mannered, well behaved orange; it's the sort of over-the-top, outrageous orange that almost makes up for our otherwise not-so-colorful fall. (There's a white variety on the market -- called 'Alba' -- but the notion of turning this gorgeous creature into a boring old white-flowered shrub horrifies me. Clearly plant breeders have too much time on their hands.)

But wait, that's not all. This is one of the easiest plants to grow organically because it's not really bothered by any sort of pest or disease. Even better, after the first year you won't have to water it at all. Seriously, not even once. Mine gets a little accidental irrigation if I happen to be watering the dahlias that grow near it, but yours will get through the summer just fine with no attention whatsoever. Oh, and it's a total hummingbird magnet, so you're doing a favor for the wildlife, too. They're supposed to be deer-proof, but don't take my word on that. People who have to share their gardens with deer tell me that most deer never got the memo about deer-proof plants and will pretty much eat whatever they want if they're hungry enough.

Leonotis is a plant that generally requires full sun, but it will put up with some shade. I planted mine on the west side of the house, where it gets a half day of sunlight at most. It also tolerates a wide range of climates, thriving in the inland heat but also blooming on the coast in the fog. You can prune it lightly after it blooms and you might get another round of flowers, or you could skip the pruning entirely. It doesn't really care what you do. (You can see why I love this plant.)

Its only fault --- and this is a minor one -- is that it gets sort of woody and ugly at the base in the winter, so you want to stick it in the back of the border to hide its more unsightly bits. But now there's a solution to that, too: Another species, Leonotis menthifolia, is being sold commercially. It's a little shorter -- about three feet tall and three feet wide in full sun -- but the plant stays green all the way to the ground. The flowers are a slightly lighter orange and the leaves are a little smaller, but otherwise it's pretty much the same plant.

I met a garden writer last month who told me that a few times a year he will ask his readers to mow their lawn in some particular pattern: diagonal stripes one month, circles the next, and so on. He can drive down the street and see who reads his column by looking at the patterns people make with their lawn mowers.

Well, you'll never catch me telling you how to mow your lawn, but I will tell you that you really ought to go outside this fall and stick a leonotis in the ground. I'd love nothing better than to drive around this time next year and see freaky orange flowers on every block. Get to it.