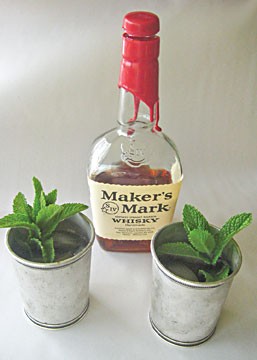 The Kentucky Derby is a hard luck race in a hard luck town. It was settled by people who tried to beat life with a pair of treys. The pickpockets are the only ones who go home winners on Derby Day. Unless you count the concessionaires, who put a nickel's worth of bourbon in a cheap plastic glass with some weeds and a lump of sugar and charge ten dollars for it.

Mama was born and raised on a small farm in Calhoun, Clay County, Ky. Among bits of acquired knowledge she passed along was the following injunction: "Never drink whiskey made in a town on the Ohio River. The water's awful. It spoils the taste."

This is interesting advice considering that my father, at the time I was born, owned Byrd's Distillery, in Louisville. However, it was not a bourbon distillery; it seems to have specialized in the mint-flavored gin and apricot-brandy line of products popular in the early years after prohibition.

My mother also taught me how to make a mint julep. Her basic instructions, as I recall them, were: "There are two things that can spoil a mint julep. One is too much sugar, the other is too little whiskey."

In Colonial America, weary travelers might have stopped at Goody Caldwell's Ipswich, Mass. inn ("Victualing and Lodging"). There they would be served a room-temperature supper of boiled beef, tongue, head cheese, fish, suet-and-injun pudding (cornbread) and a variety of pies. Beer, cider and "Hollands" (gin) would be available with the meal, the whole served at a large public table. The price would be four shillings, sixpence, including a bed in the common sleeping chamber (about $35 in today's money). Should the guest want his food heated, it would cost an extra 1 1/2 shillings. "A bowl of Flipp with Indian ruhm" was another sixpence. Rum from the Indies was the universal cheap liquor in the Colonies, just as gin, in Mother England, was becoming the solace of the lower classes.

South of Baltimore, public houses were rare, but the respectable traveler might have letters of introduction to plantations, where visitors were a welcome respite from humid boredom, and where the tradition of "Southern hospitality" was born. In Virginia of the early 18th century — as in England — a great variety of alcoholic concoctions were popular, including punch, toddy, shrub, negus, panada, fruit cordials, eggnog, caudle, bounce and syllabub.

Serious drinking was a fact of life for white plantation dwellers in Virginia and Carolina. Easter, Christmas, the New Year, christenings, birthdays and weddings were occasions for further alcohol-enhanced festivity. The Williamsburg Art of Cookery observes that "Rum and Funeral Wines are as necessary a Part of the Funeral as the Corpse."

Many Colonial Era beverages survive to the present: eggnog, of course — that irresistible marriage of whipped egg whites, sugared and brandied egg yolks, rum, cream and milk — along with beer, wine and lemonade. Others, like syllabub (cream, ale, sherry, lemon juice, grated lemon rind and sugar) are merely historical relics.

But the drink that has worked its way into the national mystique is the mint julep.

The word "julep" is derived from the Arabic "julab", sweetened rosewater. Its meaning, dating from the 16th century, is simply a sweet beverage. In the broadest use, it can be made with brandy, rum, or without spirits entirely. But from the mid 18th century, with the distillation of whiskey from corn, Americans have identified the word with a concoction of ice, sugar, crushed mint leaves and bourbon.

Why has this drink, long popular in Virginia and the Southern coastal states, come to be associated with Kentucky, and in particular, the Kentucky Derby?

The first commercial distillery for corn whiskey was in Bourbon County, Va., which later became Bourbon County, Ky. Standards for bourbon whiskey became national around the same time that excise taxes were imposed, in the late 1790s. Federal regulations require that it be distilled from a fermented mash of grain, of which at least 51 percent must be corn. The new whiskey was reduced to the desired proof by adding distilled water and — also by law — stored in charred oak casks for two years (though today higher quality bourbons are aged longer).

However, as anyone who has tasted cheap commercial bourbon (or un-aged "moonshine") can testify, there are enormous differences in technique and quality. In the early 18th Century there were even more.

It was Dr. James Crow, a Scottish-born physician and chemist, who first introduced to 19th century Kentucky the use of scientific measurements, quality control, and the sour-mash method. A New York Timesarticle in 1897 described the situation Dr. Crow faced:

At that time distilling was not accom plished by any regularly defined rule, but rather after the old formula for bread-making; by taking a "passel of meal, a passel of salt, and about so much water, biled down until it was done." By this process there were frequently days when good whiskey was made, but just as often the run, like the old woman's bread, failed to produce the hope-for result, the failure being invariably attributed to a change in the moon.

After years of work, in 1835 "Old Crow Kentucky Straight Bourbon Whiskey 86 Proof" was marketed, distilled and bottled in Frankfort, Ky., two counties west of Bourbon County. It became the standard by which future whiskies were judged over the 19th century. And in the process it changed the mint julep.

Those who appreciate the cocktail will recognize that sugar is the salvation of cheap booze. Given a sufficiently sweet mix, bad liquor can be made into an acceptable (if not distinguished) sour, gimlet, margarita, punch, Bloody Mary, gin-and-tonic, screwdriver or a dozen other ways of disguising the harsh ethanol taste.

It will thus come as no surprise that Colonial recipes for mint julep contain more sugar and water than contemporary ones. Here is a rare instance where the old is not as good as the new. And as "designer" or "boutique" whiskies have begun to appear on retail shelves (at prices up to $120), it may be that the julep will become obsolete. Certainly no discriminating drinker would make cocktails out of a great single-malt scotch, cognac or potato vodka (such as Chopin).

In any case, I deal not with such lofty and expensive elixirs. My personal choices for mint julep are either Maker's Mark (Kentucky) or George Dickel (Tennessee), both distinguished "sipping whiskeys," as Mama would say. And both good enough to minimize the sugar, lest one trivialize the ambrosia.

If, after all this, you expect a definitive recipe, you will be disappointed. A mint julep is a reflection of Southern aristocracy, and thus a very personal taste. Properly prepared, it has the ideal proportion of bourbon, crushed mint (for flavor), sugar, shaved or crushed ice, with a garnish of mint stem (for bouquet). One more thing. It must be served in a chilled vessel, ideally an eight-ounce silver cup, which tends to frost up nicely, and hold the temperature a bit longer than glass. Use of substitutes for fresh mint are unacceptable. Simple syrup may be substituted for sugar.

That said, what can one think about the weak, mini-ice-cubed, mass-production mint julep served in a souvenir plastic cup at the Kentucky Derby?

Well, it turns out that's what you get in the general admission area bars. Mama said that in the Churchill Downs Clubhouse, you got the real, custom hand-crafted kind.

Unfortunately, the drink is not well served by democracy. Perhaps at the very root of its popularity is the fact that the mint julep was the icon of Southern aristocracy: a drink that could not be mass produced. It had to be made by hand. One at a time. Preferably by an aged and beloved family retainer. And served with white-gloved hands, from a tray, on the veranda, in silver julep cups, chilled just so.