The Most Expensive Lighthouse (Part 2) 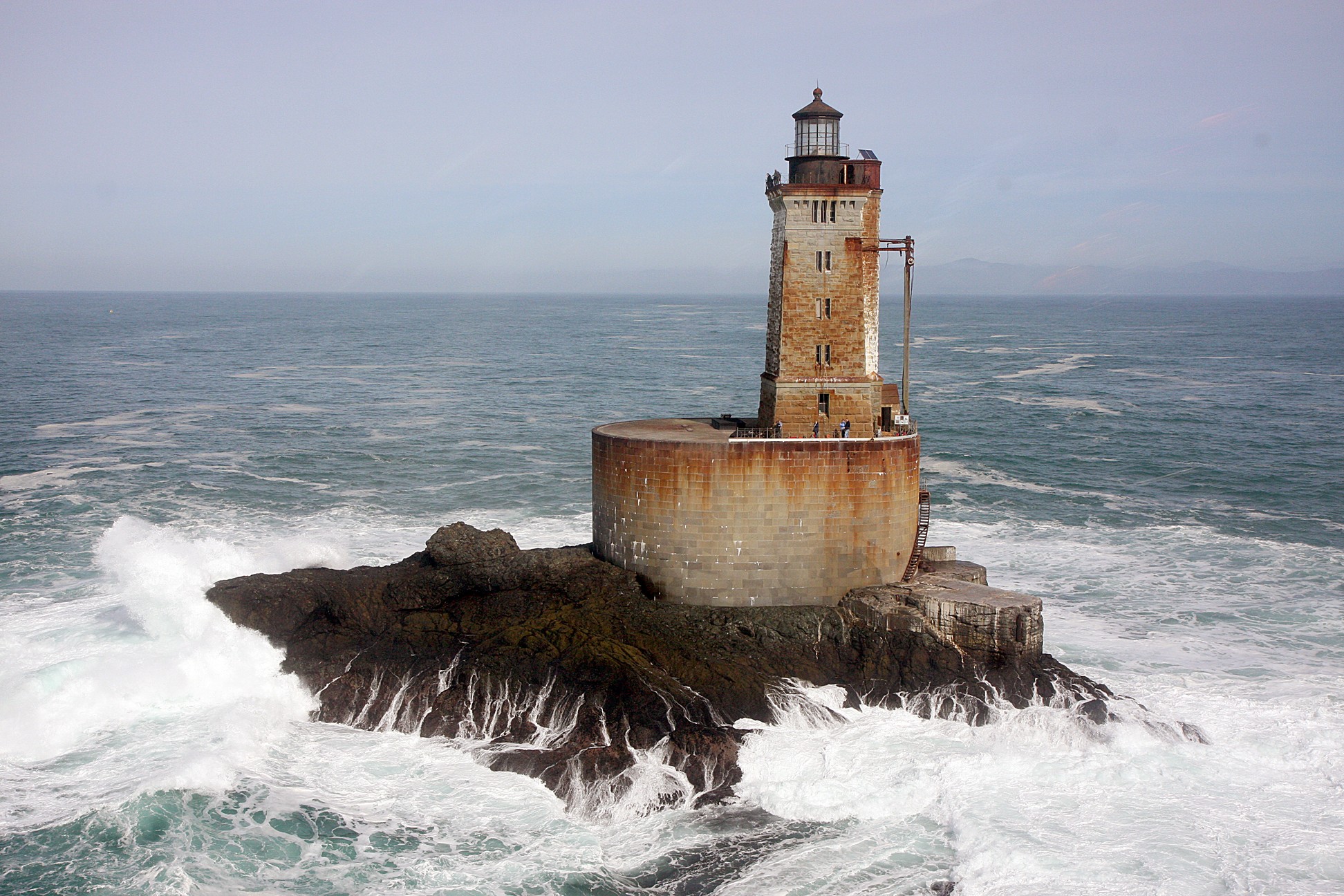 Last week, we saw how a disastrous wreck in 1865 on St. George Reef, eight miles northwest of Crescent City, prompted the Lighthouse Board to contract with Scottish engineer Charles Alexander Ballantyne to build a lighthouse on Northwest Seal Rock. Work started in 1883, and by the end of the following year, the base structure was virtually complete.

I imagine at that point, Ballantyne and his crews were anticipating rapid completion. Fate, however, intervened, in the form of the 1884 "Grant's Panic" stock market crash. Funding dried up. Congress appropriated a measly $40,000 in 1885 and zip in 1886. The following year presumably saw an improvement in the economy, since Congress released $120,000 to continue building the lighthouse. From then on, work proceeded rapidly. The 50-foot-high pier was completed in 1889, and the tower was finished by the end of the 1891 construction season. The following year saw the arrival from France of nearly 700 polished prisms and lenses to be assembled into a Fresnel lens (see Field Notes, Aug. 26, 2010). On October 20, 1892, the lamp, 144 feet above waterline, was lit for the first time.

Among the superlatives associated with the St. George Reef light is "most expensive." Depending on which relative measure is used, its $752,000 price back then is equivalent to between $20 million and $100 million today. It was five times more expensive than Ballantyne's Tillamook Rock lighthouse, and more than the combined cost of base-construction and erection of the contemporaneous Statue of Liberty. Quarrying, dressing and transporting the Humboldt granite blocks accounted for about half the cost.

Conditions for the six-man lighthouse crew were incredibly tough, and it was one of only three lights in the United States to warrant the maximum "hardship pay." Few keepers signed on for a second tour of duty. Winter storms must have been especially grueling when high seas prevented supply ships from venturing out of Crescent City harbor. During one of these storms, in 1952, crashing waves hurled rocks through the lantern room glass. Keeper Floyd Shelton is quoted in Dennis Powers' 2007 book Sentinel of the Sea: "There was a waterfall running down the central spiral staircase from the ocean coming in the lens room 145 feet or so above sea level."

In 1975, a large navigational buoy -- basically a floating lighthouse -- replaced the St. George Reef light. The Del Norte County Historical Society later removed the Fresnel lens for reassembly in its museum in Crescent City. In 1996, the St. George Reef Lighthouse Preservation Society gained jurisdiction over the site and began the ardous task of restoration, including rebuilding the lantern room. For 16 years, the society ran helicopter tours for visitors, until the Aeronautics Division of Caltrans shut the flights down last year out of concern that the site's helipad was sub-par for commercial activities. Plans are currently underway to construct a larger pad. You can contact the society (sgrlps@stgeorgereeflighthouse.us) for an update.

Meanwhile, the light is shining once again as a private "aid to navigation" and can be seen from Brookings to Crescent City.

If you do tour the lighthouse once flights are restored, you can take pride in noting that a rocky chunk of Humboldt County, in the form of granite quarried from near the Mad River, has valiantly defied the elements for over 120 years off our wild northern California coast.

Barry Evans (barryevans9@yahoo.com) awaits his editor's call to go and personally check out the lighthouse.