The Mouths of Babes 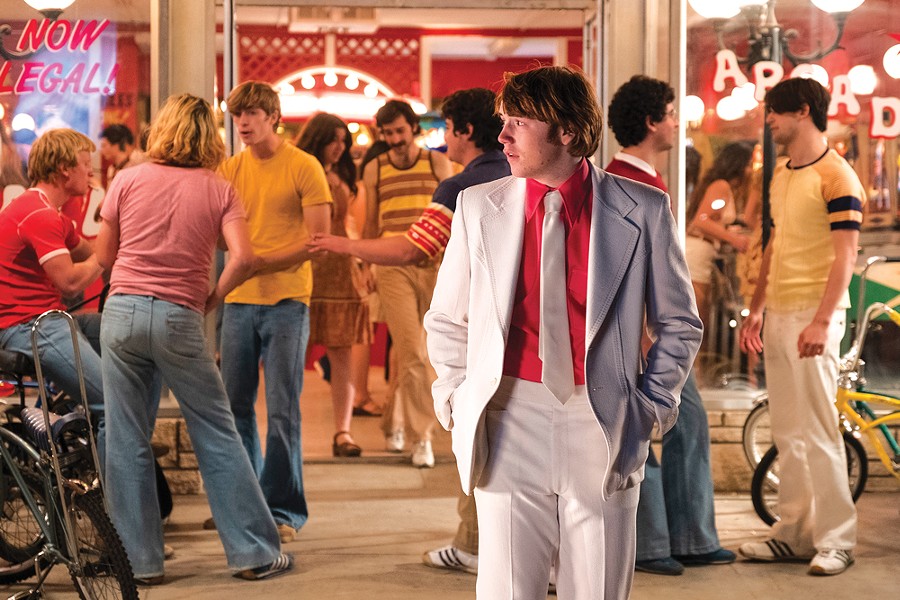 Licorice Pizza How all my favorite outfits are going to look when I finally go back out on the town.

LICORICE PIZZA. Paul Thomas Anderson's latest probably deserves better treatment than I'm about to give it. Not because I dislike or intend to denigrate it. Rather, circumstances may have prevented the fullest possible experience: I saw it in a theater which, while not frightening or dangerous, was off-putting for its unfamiliarity. That and the fact that the world is still ending, more or less — there are distractions.

Perhaps more accurately, though, Licorice Pizza is a deceptively dense text, the work of a modern master, the humor and blitheness of which belie the complexity of its narrative and cinematic technique. While it is a joyful, exuberant experience with or without context, it would bear revisiting to address its myriad subtleties. For now, we'll settle for the broad strokes.

In the San Fernando Valley, 1973, Gary Valentine (Cooper Hoffman) falls for Alana Kane (Alana Haim). He, shockingly confident and charismatic, seems undeterred by her initial resistance to his advances — boilerplate screwball/romantic comedy stuff. Except that Gary is 15, Alana is 25 and she works for the photo-portrait company (hilariously called Tiny Toes) that has descended on his school for picture day. Further, Gary is a successful entrepreneur, having reinvested his earnings as an actor into a public relations firm managed by his mother, played with delightfully targeted vacancy by Mary Elizabeth Ellis. He's a charming weirdo and eventually his entreaties to meet for dinner win Alana over.

So begins a rambling, sexually charged but entirely platonic courtship/friendship/business partnership. Alana accompanies Gary to New York (as chaperone) for a promotional appearance on a television show, where she meets Lance (Skyler Gisondo), one of Gary's co-stars, with whom she has a brief dalliance. Gary's jealousy seethes and he, in turn, pursues a classmate. The back and forth escalates across the backdrop of their short-lived waterbed company, Gary's pinball emporium, the oil embargo, the fringes of Hollywood and an intense interaction with Jon Peters (Bradley Cooper), hair-stylist to the stars, bon vivant and then-paramour of Barbra Streisand. (Cooper gives perhaps the most purely enjoyable comedic performance in recent memory)

To say there's a lot going on undersells the granular detail of the place and time Anderson and company have created (or recreated) here. The Valley we see on screen becomes an enveloping world unto itself, a seemingly unending sprawl of neighborhoods and shopping centers and glossy streets against which the constantly-surprising hijinx of Alana, Gary and his adolescent crew can play out.

While some of Anderson's later-period work has struck me as more esteemable than enjoyable, Licorice Pizza marries the languid, deceptively complex visual techniques and emotional arcs of movies like Phantom Thread (2017) and The Master (2012) with the cracked comic genius of Punch-Drunk Love (2002). This is screwball comedy of the highest order, a type of movie that really doesn't exist anymore because the coffer-keepers don't think audiences will respond and because few writers have the imagination, lexicon and wherewithal to pull it off.

Anderson does, and thankfully somebody ponied up to let him make it. R. 134M. BROADWAY, MINOR.

C'MON, C'MON. Despite their dangerous proximity to sentimentality, I've long relished the movies of Mike Mills. I was particularly struck by the uniquely even-handed sweetness of Beginners (2010). And even if I had a more difficult experience connecting to 20th Century Women (2016), I still deeply appreciated the warmth of its aesthetic and its raw earnestness. There is a quality to Mills' storytelling — a discussion of its autobiographical qualities is probably best saved for another time — that enables him to explore the emotions of multiple generations with always-equivocal fairness and attention to detail: Kids have just as much to say as their grandparents and it is worthy of the same attention.

My reaction to C'mon C'mon may, it should be said, have something to do with the weekend I've just spent with my niece and nephew, who exhausted me with the exuberance while constantly amazing me with their insight, creativity and emotional intelligence. (I may as well mention that I am a childless uncle, so can appreciate the attributes of these children without having done any of the back-breaking work of parenting. It probably colors the experience a little.)

Shot in stunning black and white by director of photography Robbie Ryan, C'mon C'mon finds new ways to look at New York, Los Angeles, Detroit and New Orleans, but it also gives voice to the wisdom of youth (the narrative is intercut with Johnny's interviews with kids in the above-mentioned cities) with more care and respect that one could hope to expect.

Phoenix and Hoffman both give incredible, vulnerable, mature performances, but Norman threatens to out-act them every time he appears. R. 108M. STREAMING.

BELLE. Anime about a country girl who finds stardom in a virtual world. PG. 121M. BROADWAY.

MATRIX RESURRECTIONS. Keanu Reeves and Carrie-Anne Moss return hopefully to give me whatever pill will take me the hell out of here. R. 148M. BROADWAY.

NIGHTMARE ALLEY. King of horror-fantasy Guillermo del Toro creates a carnival experience we will all be afraid of, with Bradley Cooper, Toni Collette and Cate Blanchett. MINOR.