The Name of the Blob

What to say in front of the children 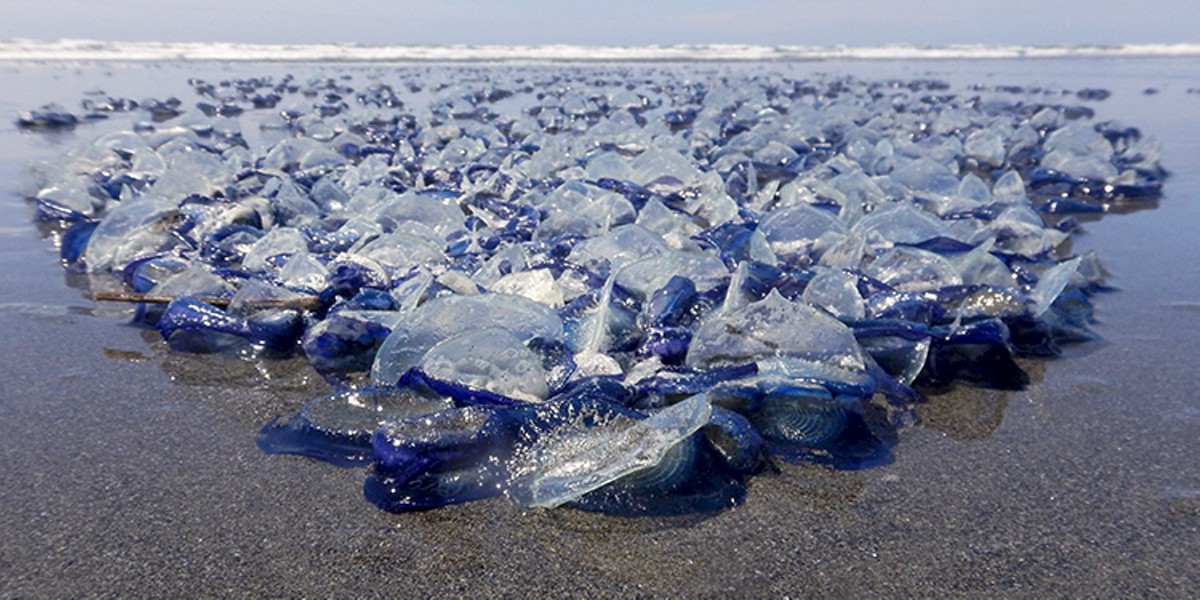 Photo by Mike Kelly By-the-wind sailors washed up on the beach.

On a beach somewhere, a colorful blob is washing up and ignorant parents are calling it "a jellyfish" in front of the children, who respond, "That's not a fish, it's a cnidarian medusa."

Any respect for Mom and Dad is forever stained.

Don't be those parents. Arm yourself with the following.

Your classic "jellyfish" looks like a pulsing dome with tentacles, arms or other frilly things hanging off it. It may accurately be called a cnidarian medusa. Or simply call it "a jelly" and you won't provoke the children. These animals lead fascinating lives, so carefully ask your little darlings to tell you about them.

Salps are also routinely called jellyfish but they are more closely related to you and your potentially disappointed children than they are to a jelly. Salps are a type of tunicate, which is in the phylum Chordata. As are we. We all have a notochord (a cartilage skeletal support) at some point in our development.

The biggest species of salp in the world regularly washes up in Humboldt (increasing your chances of disappointing the children when you point and say "jellyfish.") This biggie salp is called the vagina salp.

The body is a semi-ridged gelatinous tube that gets up to about 12 inches long. It usually has a pair of dark flaps around the front opening. Your child may know this beast by its official name, Thetys vagina, but probably not. The genus name Thetys is supposedly an alternate spelling of the name of the goddess who is best known as the mother of Achilles. You'll notice that Thetys does not carry a possessive apostrophe. I'm not sure why it's so named and I choose not to believe the stuff I read online.

The official name of this charismatic blue creature is Velella velella. When they wash up by the zillions, it's probably the most beautiful mass death in the world.

The by-the-wind sailors are in the phylum Cnidaria, which is where the typical jellies are categorized. Each "sailor" is made up of scads of individuals whose combined goals include eating, reproducing and not washing up on the beach. Lucky for us, they screw up the third goal spectacularly every few years around here.

This animal has other names but I went with the easiest one for kids to accept. They are also known as heteropods or Pterotracheoidea. It is a predatory snail. The ones I've seen in Humboldt Bay have a tiny shell containing the guts. It swims around using its gelatinous foot and grabs prey with the buccal mass (mouth) at the end of its gelatinous proboscis (trunk).

The next gelatinous zooplankton to be wary of is the ctenophore. These grape-sized balls of clear jelly wash up all the time. They have rows of cilia, or combs, used for locomotion. These cilia create beautiful colors in the right light. From the phylum Ctenophora, they aren't related to you in any obvious way.

Ctenophores are also known as comb jellies or sea gooseberries. These names are OK but I've started calling them Satan's testicles in hopes of one day hearing some sweet little child on the beach yell, "Look, Mommy, Satan's testicles!" So I hope you'll start calling them that too. No need to credit me.