The (Near) Death of a Sea 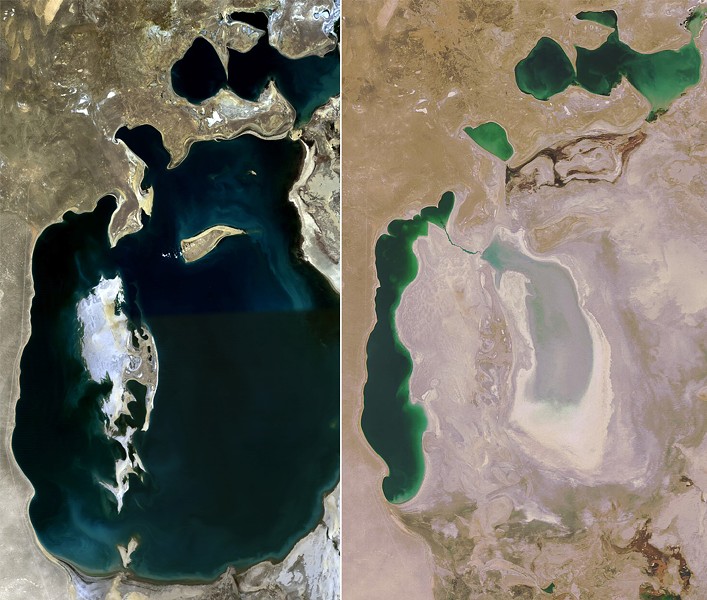 These aerial photos of central Asia's Aral Sea show the disappearance of most of what had once been the world's fourth largest lake. Since the diversion of its feeder rivers by Soviet Union irrigation projects in the 1960s (making Uzbekistan one of the world's largest producers of cotton), a volume approximately equivalent to the combined amount of water in Lakes Ontario and Erie has been lost. The total area of the lake -- now split into three smaller bodies -- is less than 10 percent of what it was 50 years ago.

It's hard to overstate the magnitude of the disaster. The receding sea has left huge dry plains covered with salt and poisonous chemicals, the results of weapons testing, industrial projects, pesticides and fertilizer runoff. Wind blows the toxic dust to the surrounding region, where infant mortality has skyrocketed and illnesses such as tuberculosis, cancer, digestive disorders, anemia and infectious diseases, are now common. Meanwhile, the Aral Sea fishing industry, which in its heyday produced one-sixth of the Soviet Union's entire fish catch, is no more, due to a tripling of water salinity as the sea shrank.

The future is not totally bleak -- at least in the north, in the Republic of Kazakhstan, seventh-largest country in the world. The Kazaks completed a new dam separating the north from the south parts of the sea in 2005 and have steadily been increasing flow to the North Aral Sea, which has grown in area and deepened (from a low of 98 feet to around 140 feet). As a result, salinity has dropped to near-normal, and significant stocks of fish have returned. Meanwhile the South Aral Sea, which lies in poorer Uzbekistan, has been largely abandoned to its fate, and oil exploration rigs now sit on the former lake bed.

Why should the fate of the Aral Sea, half a world away, concern us here in California? Perhaps we can learn from it, since we're basically doing the same thing in the fertile Central Valley: taking out more water than goes in. The average depth of the Central Valley water table fell a foot a year from 2003 to 2009, and double that in the San Joaquin River basin. If we continue to extract groundwater at the present rate, we run the risk of endangering the Valley's agricultural future. Out-of-sight, out-of-mind won't cut it. We know what's happening -- even though it's not as obvious as the overt destruction of the Aral Sea.

Barry Evans' (barryevans9@yahoo.com) carries his own store of water (as we all do) in his 12-gallon capacity body. The collection of his first 80 Field Notes columns is available directly from him or from Eureka Books.