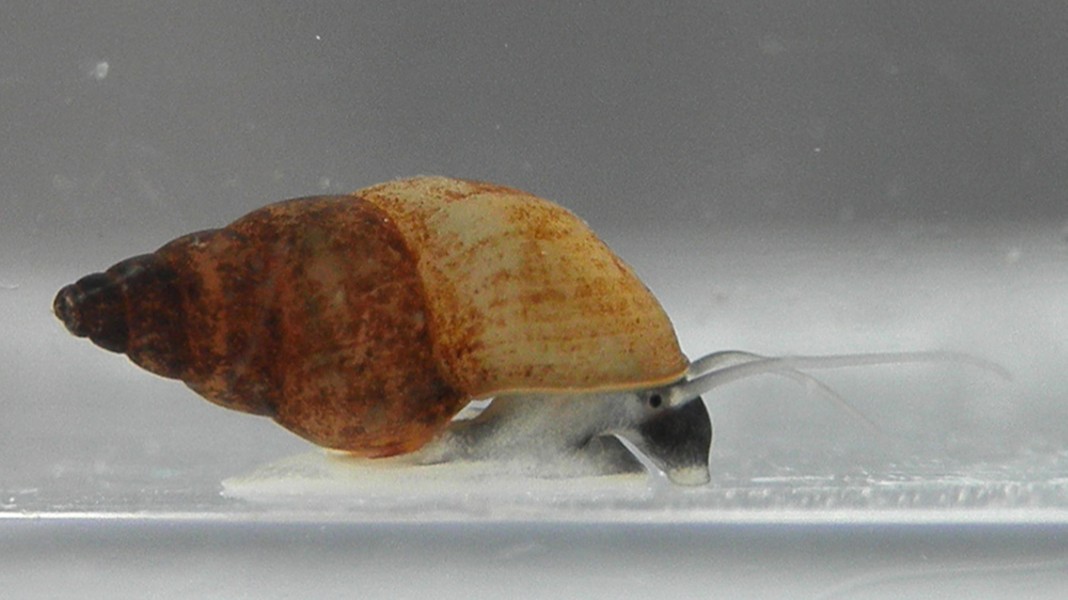 Wikimedia Commons New Zealand mudsnails measure just under 5 millimeters but reproduce prolifically and can take over an ecosystem. 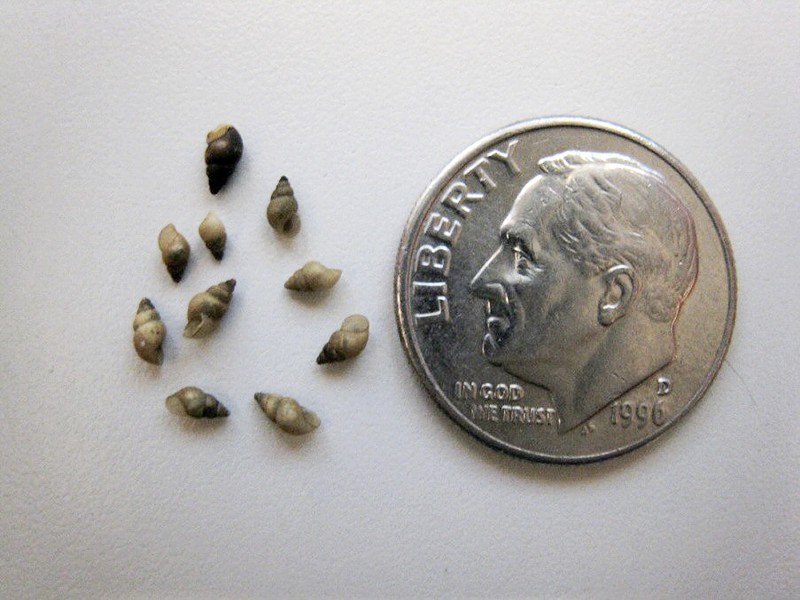 Wikimedia Commons New Zealand mudsnails measure just under 5 millimeters but reproduce prolifically and can take over an ecosystem.

Provided you can tell the difference between the harmless native snail and the New Zealand invaders, report your sightings online at https://on.doi.gov/2P5s6aH. For more information on the snails, visit https://bit.ly/2RkRcUL.

About the last thing Northern California needs right now is another environmental crisis, especially one that affects the already beleaguered salmon population. Consequently, scientists were not happy to learn that New Zealand mudsnails, which have the unpleasant habit of taking out the algae at the bottom of the aquatic food chain, have invaded local waterways. Once the algae are gone, the rest of the aquatic food chain crashes, too.

The term "food chain" refers to the idea that every animal, insect, bird, worm, fungus, bacterium or virus eats something else, and is, in turn, eaten by something else. At the very base of this chain are plants, which create their own food from sunshine, water and carbon dioxide. In waterways, these plants are usually algae.

New Zealand mudsnails are tiny critters, 5 millimeters long or less, and easy to overlook. They cluster on stream bottoms and on rocks, and dine on whatever algae or dead organic matter they can find. They also reproduce asexually and multiply very quickly.

According to a report by Darren Ward, a fisheries biologist at Humboldt State University, each female can produce broods of up to 80 daughters every two to three months, allowing populations to rapidly reach densities of more than 100,000 per square meter. As their numbers multiply, they outcompete native insect larvae that also munch on these food sources. When the insect larvae disappear, so do the adult mayflies and caddisflies that feed salmon and trout.

Moreover, the mudsnails have an uncanny ability to wall themselves off, sealing up their shells when devoured by a fish and going into a state of suspended animation. They pass through the fish's digestive tract unharmed and come out the other end, much like seed passing through a bird.

They also affect terrestrial biology. The same insects that feed fish also feed riparian spiders — which can compose 80 percent of the diet of some songbird nestlings.

Fish commonly eat native snails, which don't have that self-protective ability. But a fish that eats a New Zealand mudsnail won't get any nutrition out of it. Trout have been caught on the verge of starvation, with bellies full of undigested snails.

Scientists studying the little mollusks have noted that, at least in this part of the world, their densities are highest in estuaries and lagoons. This may be due to the chemistry of the water — the mudsnails thrive in water that is high in calcium and relatively low in salt, which at least keeps them out of Humboldt Bay. It also seems to keep them from traveling far upstream, at least in densities high enough to cause ecological damage.

But the mudsnails can do a lot of harm in estuaries. In some parts of the country, they replace most of the biomass of the stream. Juvenile salmon live in estuaries while they grow and gain weight for their future life in the ocean. If they can't survive in the estuaries, the species is in trouble.

To make matters even worse, there is no known way of eliminating the mudsnails. Dumping poison into a waterway is never a good idea, nor is draining it, even where possible. Martha Volkoff, the environmental project manager of the Invasive Species Program of the California Department of Fish and Wildlife, noted that snail populations often crash after reaching very high densities. However, the population crash could be the result of the mudsnails using up the algae that sustain them. How — and if — this will all play out is still unknown to biologists and fishery managers.

Scientists believe that the first mudsnails arrived in this country as an accidental import, like most other invasive plants and animals. They first showed up in 1987, in the Middle Snake River of Idaho. In California, they were first noted in Putah Creek, in Yolo and Solano counties, and near Owens Dry Lake in Inyo County. Now a United States Geological Survey map of invasive species shows findings scattered all over the state, with a huge cluster in the East Bay region of California. (They are also found in many other states across the nation.)

Here on the North Coast, they are found from Lake Earl in Del Norte County to Arcata. The latest finding — in October — was made along the Mad River, one at the boat launch near the mouth of the river and the other on the banks of a small public park owned by the Humboldt Bay Municipal Water District. So far, there is no sign of the critters having invaded the Mad River Hatchery, which is 8 miles farther upstream. The HSU hatchery was not so lucky and has been quarantined. Arcata city employees have also discovered the snails in Gannon and Jolly Giant sloughs.

Humans seem to be the chief vector for transporting the mudsnails from one waterway to another. According to a government report, New Zealand mudsnails may be transported on fishing gear, on waders and boots, swimsuits and swimming toys and even by hunting dogs and horses. Hikers, backpackers, horseback riders and bicyclists may inadvertently transfer the snail when encountering multiple stream crossings during their outings. The snails' small size allows them to be carried in tiny crevices that might escape detection. The mudsnails have also been inadvertently distributed via live bait and bait containers.

Even personnel involved in monitoring projects, restoration activities and other natural resource activities that cross watershed boundaries may transport New Zealand mudsnails to new water bodies in the same way. Mudsnails can live in moist environments near the edges of streams and therefore can also be picked up and moved by people who don't even enter the water.

So far, authorities are combating the further spread of the mudsnails via warning signage. But nobody really knows how widespread the invasion is and Volkoff said that Fish and Wildlife does not have the resources to check every waterway in the state. Instead, she said the agency relies on reports from smaller, local agencies — and by members of the public who notice strange little brown dots on anything that has touched a creek.

This story appeared in print as "The New Zealand Invaders."