The old wall of words 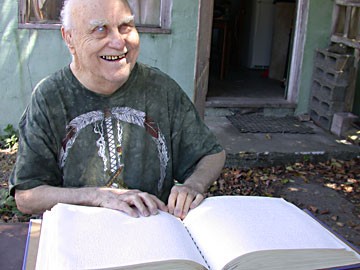 Harvey Jossem was born on April 15, 1930 — he would have turned 78 this Tuesday. But Jossem died, of natural causes, on Dec. 28, leaving behind his tiny, time-frayed little green house on an unnamed dirt street in northeast Eureka, four cats, a handful of friends and caregivers and stacks and stacks of personal effects whose fate Jossem's closest friend, Boyd Hewitt — "Blue" to his friends — must now determine. In fact, Blue has to be in court this month as part of the procedure to appoint him as the official administrator of Jossem's estate.

Truth is, though, Jossem didn't really have much in the way of an estate — and what possessions he left behind might be considered remarkable, if not befuddling. He'd lived in the same little house since the 1960s — he paid $6,000 for it back then, and it's worth about $80,000 now. It's excruciatingly small, and on his modest, fixed income Jossem hardly had money to snazz up the place. He'd been blind since he was 41, he lived alone and decor held no allure for him.

His interests, anyway, seemed to lie more in the realm of the cerebral than the acquisitive. Politics and social justice were central to Jossem's being. His caregivers, once they'd helped him deal with the weekly mail, bills and other tasks, would read local newspapers and national news magazines to him. And all day long he'd listen to National Public Radio — if you called when he was listening to Amy Goodman, well, clearly you didn't know what was important to Harvey Jossem.

Jossem took no guff from people — back when the Journal met him, in August 2006 (see "Island of Harvey," Aug. 10, 2006), he was in a tug-of-war with AT&T, which had rescinded his ability to pay his bill by the automated phone-in system. At long last, he prevailed. Don Bollinger, one of his caregivers and friends, said the first time he met Jossem he brought with him a pair of sunglasses because he'd been told that sometimes blind people feel self-conscious going out in public with their eyes exposed. He asked Jossem if he wanted to wear the glasses.

"And Harvey said, 'That would be pretentious, and there's too much pretension in the world,'" said Bollinger.

But like we said, among Jossem's possessions are some head-scratchers. Take, for instance, the 72-volume Braille dictionary that Jossem rescued one day a few years back from what might have been certain death by recycling. It had been donated to a blind-services organization which didn't want it, because these days one can access information online by using refreshable Braille displays or speech output software.

Each volume of this beast is about half a foot thick and 11-inches square, bound in a blue hardcover and airy-light — in order for the Braille to hold its shape, it has to be printed on thick card stock, and not very many of these pages can go into one volume because their weight would smash down the Braille. The books cannot be stacked atop each other — again, the smashing problem. So, picture 72 volumes each the size of a big-city phonebook that have to stand alone. Bollinger said the volumes became a new wall in Jossem's tiny front room.

But now what will become of Jossem's big wall of words? It's something Blue and his other friends have to figure out. (They've already taken care of the most important stuff: Blue took one of Jossem's cats, and Bollinger took the other three.)

"Nobody's going to be knocking down the doors for it," said Doug Rose, of the Humboldt Council of the Blind, last week. Paper dictionaries are obsolete. "The best thing I can think of is it can go to the recycling center. I think it's past its time. Unless someone overseas wants it."

Maybe the library will want it? Hard to imagine. Maybe, says Bollinger, he'll be able to give it to a friend of his whose child is vision-impaired. "I think it might be quite good for a young person who's learning Braille," he said.

Jossem didn't leave instructions for it. He died, said a caregiver, the day he was to update his will.