The Painting on the Wall 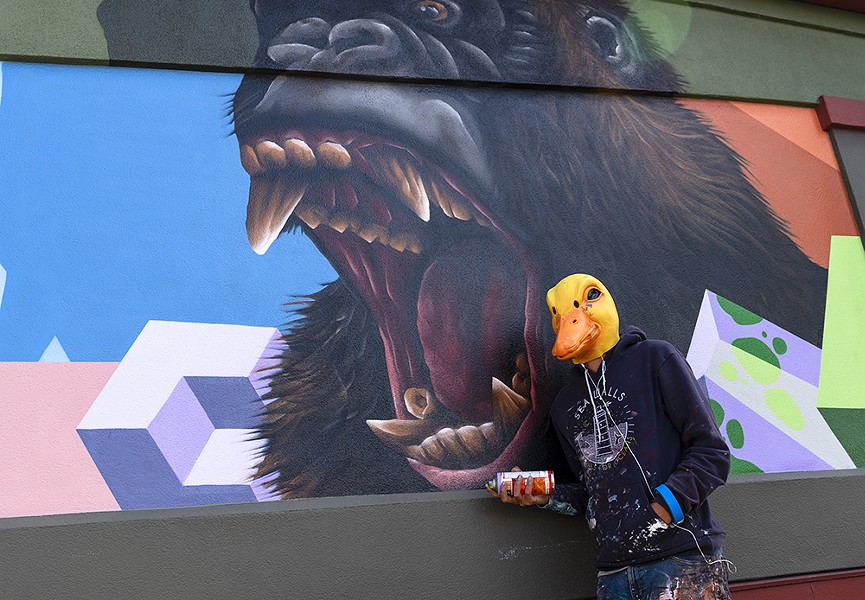 Canadian artist "Bird-O" (aka Jerry Rugg) follows the graffiti art tradition of anonymity by refusing to be photographed without his mask as he poses in front of his work at Paul's Live from New York.

At the block party for the second annual Eureka Street Art Festival, more than a dozen artists hailing from points ranging from Bayside to Buenos Aires were steadily moving toward completion in front of ebullient crowds. Many had been working in public all week — spraying, brushing, gridding and stenciling, shimmying up and down ladders and hydraulic lifts. Layer by layer, popsicle-bright paintings were taking shape on storefronts and capacious old wood-framed buildings. The palette of the Sixth Street commercial area was evolving from dirt-adjacent neutrals into something hotter. Artists who had been dressed down earlier that day had mostly changed into paint-spattered hoodies or overalls by the time the fog rolled in. On G Street a small crowd was watching an enormous mural that featured contributions from multiple festival artists go up, swaying happily to Bandemonium's Dixieland rendition of "Happy Trails," while the view of the Samoa Bridge got lost in mist.

Artists in this year's festival concentrated their efforts on Sixth Street between E and H streets, where walking now feels like scrolling past one colorful mural-scape after another. Unrelated images' common denominator is clickbait-worthiness: There's a gorilla followed by a psychedelic mandala in full color, towering redwoods in black and white, and a wall of stylized flames. It's a slow-food version of the blitz of pictures one tunnels through in surfing the web. Bird-O's snarling ape and Qbert-looking 3-D cubes play to 1980s nostalgia. Sonny Wong's angular hipster tinkering with his schooner-in-a-bottle should win an award for slyest play on the "Victorian seaport" past. On the corner of F and 14th streets, the upper story of Partrick's Candy Store now dematerializes in a drift of candy-colored, pill-shaped lozenges painted by Bareket Kezwer. Nick Sweetman's mural on the side of Eureka Stove uses delirious pinks and purples to recall the sherbet gaudiness of certain Humboldt sunsets, picturing the beauty of the land and its seabird inhabitants while leaving humans out of it.

During one of Eureka's previous periods of intensive public-art creation in the late 1990s and early 2000s, Duane Flatmo and members of the Rural Burl Mural Bureau, the public-arts collective for high school students he founded and directed, dominated the local scene. Flatmo was on hand refurbishing the elegantly stylized frieze of tropical vegetation he'd completed on the side of the Vision Center building some 20 years before. Former bureau member Lucas Thornton, who is now beginning a mural on the Redwood Arts Association building on Sixth and F streets, recalled that this had been the site of his first mural painting experience.

A shirtless, purple-haired Blake Reagan stood in front of his work in progress a block away and told a mural-tour crowd: "I'm having fun with the color. There's an overlay pattern; the flowers represent the order of nature, overlaid over the chaos of humanity. It's gonna take another couple of days." A voice piped up: "I think that's gonna take longer, the reconciliation of the order and the chaos." Everyone laughed.

A man on the street yelled, "What does it all mean?" One potential takeaway is that street art has expanded far beyond its roots. The term now covers pretty much any type of visual expression one might make in public. Graffiti writing and culture, so vitally important to earlier generations of street artists, have become minimally relevant to many younger practitioners. "He's in a phase right now where he's playing around with tentacles," a tour guide said of Canadian artist Jerry Rugg, who was completing a mural on the side of Paul's Live from New York on Saturday afternoon. Rugg, who also paints as Bird-O, was the only festival artist who adhered to graffiti art's tradition of anonymity by refusing to allow pictures to be taken of his face.

It's striking that such a range of images is now acceptable within limits, even as unsanctioned names (other than those belonging to corporations and advertisers) remain forbidden — as indicated by the recent arrests of prolific Eureka graffiti taggers SKUNK and STAYN. Street art districts have popped up in small and mid-size cities around the country as associated effects of retail bump and foot traffic have become well documented. But such spaces are likely to be deemed expendable should gentrification send property values past a certain point, as happened in a recent high-profile case involving the Five Pointz space in Queens, New York. It remains unclear whether street art can retain the qualities that made it seem cool and edgy in the first place, now that (some of it) is in commercial demand.

Vetting and review processes mean that the murals in the Sixth Street commercial district, like those in similar spaces elsewhere, avoid any hint of controversy. (Despite or because of the extremism of the present, making or green-lighting public work that communicates an explicit position on much of anything seems to have become a non-starter.) The only works here to hazard a stance make valuable if uncontroversial arguments in favor of slow media and live connection. These include Dave van Patten and James Carey's modest proposal to put the phone down, and Mabel Vicentef's celebration of reading.

Many street artists will tell you that they strive to entertain. Mission accomplished, judging by the reaction of the crowds that thronged the streets during the festival's culminating block party. I asked a man wearing a baseball hat and a shark-tooth earring on the corner of Sixth and F streets how it was going. "Great people-watching opportunities," he replied, grinning. "A classic Humboldt crowd." And it was. Patagonia-clad urban wanderers mingled with off-shift workers in broken-in Carhartts. There were matrons in yoga pants alongside ragged men with facial tattoos and jittery extremities, adorable free-range children and dogs aplenty. To feel the vibe was to tap into grassroots hunger for a common culture and speculate that public art's role as social catalyst might have become one of its most vital functions.

Editor's note: This article has been corrected to indicate that Duane Flatmo's mural is on the wall of the Vision Center.