The People in The Park

Somewhere between disgust and sympathy, SoHum regards its homeless 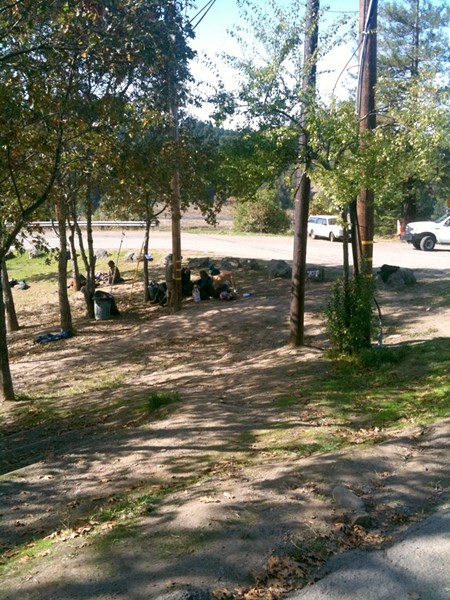 The Jim Demulling Memorial Veterans Grove is just a patch of grass sandwiched between Highway 101 and downtown Redwood Drive. It's home to some spindly trees, a flagpole, a placard with the inscription, "May Peace Prevail on Earth" and, on any given day, a few to a few dozen homeless people.

Those homeless people are a source of increasing community outrage. The latest meeting ostensibly aimed at discussing the problem and brainstorming solutions quickly devolved into a shouting match.

SoHum's homeless controversy isn't isolated to Veterans Grove; vagrants line the streets of Garberville and nearby Redway, clutching cardboard signs, wrangling mutts, strumming banjos or simply soaking up the autumn sun. Throw a rock and you'll hit one (but, you know, don't really). Yet the park has become a lightning rod, partly because it's in a state of leaderless limbo.

Veterans Grove is county property and was previously managed by the local Veterans of Foreign Wars. As complaints about the park mounted, another group, Veterans for Peace, offered to assume stewardship.

That hasn't happened yet, and not everyone is crazy about the idea. District 2 Supervisor Clif Clendenen told the Journal the county is open to "various solutions" but doesn't want to step in and micromanage. Dee Way, executive director of the Garberville-Redway Area Chamber of Commerce, said her organization wants "to hear from the veterans who had the park before, the veterans who are interested in taking it over, the business community and the community as a whole."

Meanwhile, people keep congregating in the park and, according to some, dumping trash, scaring away tourists and casting a pall over Southern Humboldt's most visible, centrally located town.

Speaking at the last meeting, held Oct. 21 at the Garberville Veterans' Hall, Realtor Blake Lehman said transients have taken over the alley behind his office, located a few blocks from the park. "I can't let my own kids get out of [my] car to play on property that their grandparents bought," he lamented. "I left the poop shovel out one night, and it was gone." (That, at least, elicited a few wry chuckles.)

Poop was a major theme at the meeting. John Casali, head of the ad hoc Eel River Cleanup Crew, said that from Aug. 25 to Sept. 25, his crew hauled waste out of parks and homeless camps between Sprowl Creek to the south and Dean Creek to the north. At the time, he said, he issued a challenge to the homeless community: Keep things clean.

"Nobody in the world is allowed to do this," Casali admonished, his voice rising. "It doesn't make no difference if you had a bad childhood."

According to Casali, his group has collected more than 7,500 bags of garbage in the past five years. He doesn't intend to pick up any more. "I'm done," he said flatly. "People are shitting in my drinking water. If anybody here thinks that's OK, raise your hand."

One seemingly obvious solution is to provide more toilets. That's what local resident Debra Carey tried to do -- in June, she bought a Porta-Potty and had it installed at Veterans Grove. Given the paucity of public restrooms, Carey said she considered the toilet a "gift for everyone," locals and tourists included. But she didn't secure a permit, and soon the toilet was removed.

Carey spoke at the meeting and drew loud applause from the homeless contingent, which also had its say. One man read a succinct, eloquent prepared statement on behalf of the residents of Veterans Grove, while another man who said he's dying of cancer and identified himself only as "Lost" encouraged everyone to remember that "we all live under the same God."

But the shouting and finger-pointing soon escalated -- fueled by accusations of laziness and obliviousness on the part of the homeless and hypocrisy and indifference on the part of residents and police -- until moderator Eric Kirk threatened to pull the plug and about half of the 60-plus people crammed into the stuffy meeting room bolted for the exit.

"That's right!" someone shouted. "Go back to your houses and sleep in your beds!"

If all this paints a hopelessly bleak picture, that's only partially accurate. Directly across from Veterans Park sits Tiger Lily Books, an eclectic hole-in-the-wall owned by Kathy Epling and Paul Encimer. They don't merely tolerate the homeless, they welcome them with open arms.

Epling said she's "enchanted" by the young travelers who come through her store looking for titles by Kerouac and Steinbeck. They remind her of the counterculture and back-to-the-land movements, which led Epling and Encimer, along with countless others, to seek refuge in California's untamed northern frontier.

While those '60s and '70s hippies met their share of hostility, they also found inexpensive land and a burgeoning cash crop. And so they stayed, built homes, raised families, started businesses and eventually assimilated.

Today, the cash crop still thrives -- trimming jobs are a major draw this time of year, inspiring the trending term "scissor drifters" -- but most of the land is either already claimed or prohibitively expensive. Affordable housing is virtually nonexistent in Southern Humboldt, and even reasonable rentals are rare.

So TJ (no last name given) lives in his RV. TJ, who spoke to the Journal outside Tiger Lily Books, said he served two tours in Afghanistan and has been in Garberville for three months. During that time, he claims he's been ostracized, punched in the face and told repeatedly to get out by self-proclaimed locals. So why does he stay? "There's work. It's beautiful country. Nobody's gonna run me out of town. I'll leave whenever the hell I want to leave."

Counts conducted by the Humboldt Housing and Homeless Coalition suggest Southern Humboldt's homeless population is actually declining slightly. Dave Formosa, who runs Redway Liquor and Deli (next door to a storage lot that recently installed razor wire to keep out vagrants), agrees the so-called crisis is overblown. "Every few years, people get up and say, ‘There's more of them than ever!'" he said. Still, he admits, he's fielded "constant complaints" about bums over the years and has dealt with fights, shoplifting and the like.

"I used to do this in downtown San Francisco," he said, even as two ragged, bearded men ditched their backpacks outside and entered his store. "And when I came here I thought, ‘Oh, it's just like home.'"

Back in Garberville, night is falling. A line of cars rolls down Redwood Drive, headlights illuminating shuttered businesses, deserted sidewalks and, finally, Veterans Grove. A handful of huddled silhouettes stand out against the encroaching darkness, hoods up, cigarettes glowing.

They have plenty of detractors. They have an uncertain future, a divided community, a country fractured by recession. Some may not have much hope. But, for tonight at least, they have the park.

Jacob Shafer is a freelance writer and stay-at-home dad who spends his spare time chopping firewood in Whitethorn.