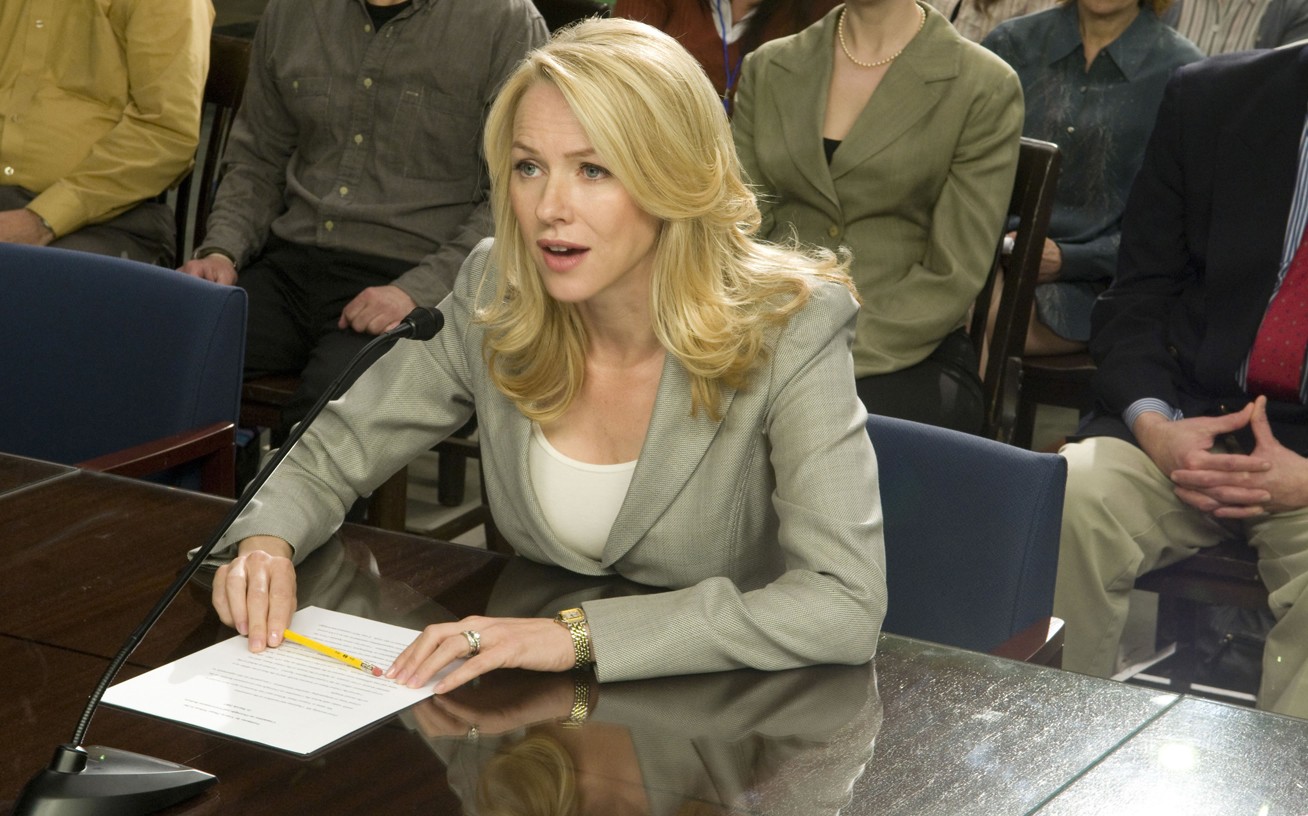 TRON LEGACY. Sequel to the 1982 Disney video game flick Tron has Jeff Bridges returning as Kevin Flynn, a vid-game creator who disappeared into a digital world he'd created, leaving a young son behind. When his grown-up son Sam (Garrett Hedlund) finds out where he is decades later, he too enters the game on a quest to save his dad. 127m. Rated PG for sequences of sci-fi action violence and brief mild language. In 3-D at the Broadway and the Fortuna, in 2-D at Mill Creek and the Minor.

HOW DO YOU KNOW. Rom-com written and directed by James L. Brooks (Terms of Endearment, Spanglish) about a love triangle involving a pro softball player (Reese Witherspoon), a major-league pitcher (Owen Wilson) and a corporate executive in legal trouble (Paul Rudd). Jack Nicholson shows up as Rudd's father. 116m. Rated R for some language. Opening Friday at the Broadway, Mill Creek and Fortuna.

YOGI BEAR. The ’60s Hanna-Barbera cartoon becomes a live action/animated amalgam with CGI bears. The story has Yogi (voiced by Dan Aykroyd) and young Boo-Boo Bear (voiced by Justin Timberlake) joining forces with their enemy, Ranger Smith (Tom Cavanagh), to save Jellystone Park when it is threatened with closure. Done in 3-D, but local theaters have no 3-D screens available. 82m. Rated PG. Opening Friday at the Fortuna, the Broadway and Mill Creek in 2-D.

On Friday, the Arcata Theatre Lounge screens Mike Judge's corporate rebellion comedy Office Space, with Ron Livingston leading a trio of scheming stressed-out software engineers. On Saturday, get in the holiday mood at the ATL with Tim Burton's The Nightmare Before Christmas, a stop-motion tale about the efforts of the scary residents of Halloween Town to take over Christmas. On Sunday, it's The Lord of the Rings: The Two Towers, the second episode of of Peter Jackson's take on Tolkien's epic fantasy, with Frodo (Elijah Wood) on his way to Mordor.

Next Wednesday's Sci-Fi Pint and Pizza Night at the ATL gets the holiday treatment with a double-bill: Santa Claus Conquers the Martians finds St. Nick captured by aliens and taken into outer space. The seriously creepy ’50s Mexican Xmas flick Santa Claus has Santa using his know-what-you've-been-thinking powers to spy on kids' dreams as he battles his acronym, Satan, whose goal is to make the children of Earth do evil.

FAIR GAME. If there are still those with a misguided nostalgia for the recent Bush administration, they should see this film. But that's one group that will most likely skip it. As for the rest of us, Fair Game will just make you really angry all over again. That's all right.

The broad outline of the Valerie Plame affair is known to anyone who even casually follows the news, and anyone pursuing even minimal research on the Web can flesh out all the details from any number of perspectives. Based on the books Fair Game: My Life As a Spy, My Betrayal By the White House by Plame and The Politics of Truth by her husband Joe Wilson, this film is primarily an examination of a marriage put under extreme pressure by the public outing of Plame as a CIA agent. As such, the film's effectiveness is greatly enhanced by the excellent performances by Naomi Watts as Plame and Sean Penn as Wilson.

The first part of the film deals with Plame's performance as an agent, where she is seen as highly competent in the office as well as in the field, overseas. Unknowingly, the turning point comes when the CIA sends Wilson, a diplomat and consultant, to Niger to investigate suspected sales of uranium yellowcake. His unambiguous assertion that such a sale never took place did not sit well with the White House, out for evidence to justify the invasion of Iraq.

The second part of the film deals with the effect on Plame and Wilson of the public revelation of Plame's employment as a covert operative and her desertion by the CIA despite her own continued refusal to talk publicly. It is in this section that Watts is especially effective. In particular, the way she plays the moment when she decides to testify is beautifully understated yet crystal clear in its intent.

The film is unambiguous in where it assigns blame, not surprising given the source material. It's also the position that I -- and, I would guess, most of the people in the theater when I saw the film -- believe is the truth. Fair Game ends on a high note, but real life is more ambiguous and downbeat. See this film and get mad all over again while enjoying two excellent performances along the way. 108m. Rated PG-13. At the Minor.

THE GIRL WHO KICKED THE HORNET'S NEST. As was the case with Fair Game, Hornet's Nest made me angry, although since I'm not a Swedish citizen it wasn't as personal an anger. Still, the parallels are there: Lisbeth Salander is certainly fair game for the upper echelons of power in Stieg Larsson's trilogy of misogyny and political corruption. Just as the Bush administration did in relation to Valerie Plame, those in power changed the narrative to make it about her, not them.

Larsson's novels have consistently combined the genres of woman-in-danger and political thriller, but Salander is so much more interesting than any other such genre character that the form becomes irrelevant. The perfect actress that the filmmakers have found to play her -- Noomi Rapace -- has made the three films incredibly moving as well as entertaining.

Those who read the "final" novel know that Salander spends much of her time in a hospital, having been shot three times by her father, and the rest of the time in court. Meanwhile, Mikael Blomkvist (Michael Nyqvist) is busily collecting evidence to prove her innocence and establish evidence of her abuse.

The film wisely and necessarily telescopes the hospital stay and puts central focus on the investigation of political corruption and the threats to the staff of Millennium. Although Larsson presumably had more novels in mind before his death, Hornet's Nest nicely, and satisfyingly, ties up all the remaining loose ends of the story that began in Dragon Tattoo.

Too bad real life can't sometimes emulate fiction in this regard. But I'll settle for fiction and filmmaking of this caliber: The novels and the films have certainly enhanced the quality of my life and I'll be forever grateful even as I'm sad to see it all end. Maybe someone will smuggle that laptop out of Sweden. 147m. Rated R. At the Minor.

THE TOURIST. German director Florian Henckel von Donnersmarck made his feature debut in 2006 with The Lives of Others, as fine a film as I've seen for some time and winner of the 2007 Oscar for Foreign Language Film. For his second feature, he has moved from a sophisticated, complex examination of life in East Germany to a caper film with two major Hollywood stars. He must be in love with Angelina Jolie, but then who isn't?

If you're one of her detractors, skip this film. The camera lovingly tracks her in virtually every frame. Even poor Johnny Depp, always interesting, has trouble capturing his share of the frame. The ending twist is fun even if I guessed it, but this is extremely light entertainment, or should I say Joliement? 103m. Rated PG-13. At the Broadway and Mill Creek.

THE CHRONICLES OF NARNIA: THE VOYAGE OF THE DAWN TREADER. The third in the adaptations of C.S. Lewis' fantasy series is, unhappily, not a very good film, which is unfortunate because the series started out with great promise with The Lion, the Witch and the Wardrobe. In this episode, Edmund and Lucy Revensie (Skandar Keynes and Georgie Henley), two of the four original children, return to Narnia with their extremely irritating cousin Eustace (Will Poulter). They need to help save Narnia from ultimate evil, but only after they face their own darkness. There's lots of action involving a ship and enchanted islands, but it all seems too familiar and bland. It may be time to close out this series. 115m. Rated PG. In Fortuna (in 3-D), at the Broadway and Mill Creek (2-D).

HARRY POTTER AND THE DEATHLY HOLLOWS PART I. The final chapter begins! If you can't wait for Part II, the script is available in book stores everywhere! Rated PG-13. At the Broadway.

LOVE AND OTHER DRUGS. Jake Gyllenhaal and Anne Hathaway fall unexpectedly in love and then get nekkid. A lot. Rated R. 113m. At the Broadway.