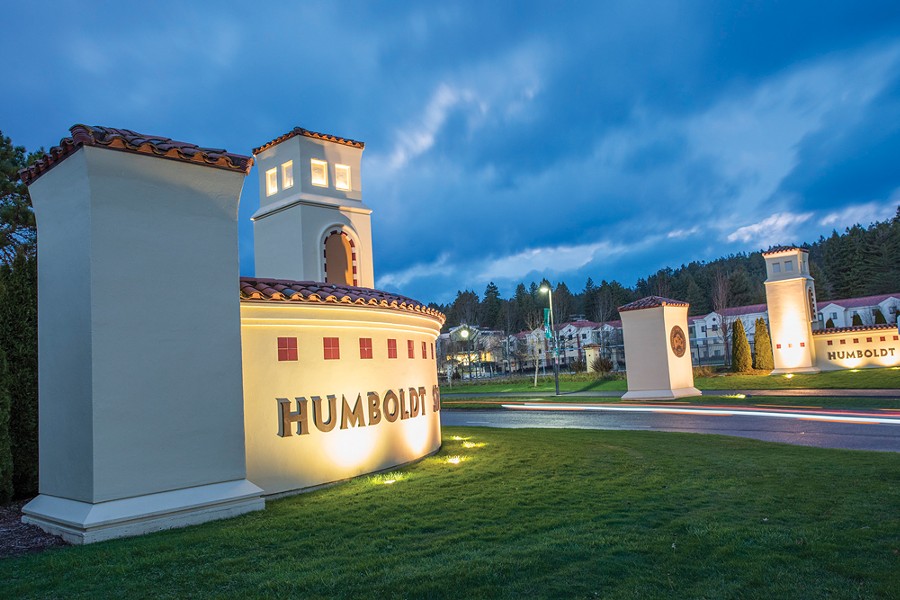 HSU is in the process of outlining how it can meet and maintain CSU's polytechnic standards by demonstrating excellence in its academics and assessing its facilities, budget and external partnerships in a self-study report to CSU Chancellor Joseph I. Castro, who will then present it to the Board of Trustees to make the final decision.

Polytechnic universities like Cal Poly San Luis Obispo, Cal Poly Pomona and Caltech (which isn't part of the CSU system) all have a key focus in engineering, technology, and natural and applied sciences.

HSU Provost Jenn Capps says the possibility of HSU becoming a polytechnic isn't implausible, especially when you look at the data.

"When you compare across the 23 CSU campuses, who offers the most students majoring in a science degree? We're No. 1. We're above the other two polytechnics. When you include engineering into the mix, if you look at science and technology and engineering, well, that data says we're No. 3," Capps says. "In a way, we're already a third polytechnic."

Academically, HSU has already exhibited excellence in its natural resources and science programs, but needs to demonstrate how it would expand and build on its environmental engineering, technology and applied sciences programs — the four fundamental polytechnic studies.

Capps is hopeful a polytechnic designation would lead to more students applying to and enrolling at HSU, especially because polytechnics are held in higher esteem and provide more opportunities.

"You know, there's a lot of prestige with this designation. The students will come. Many students seek the designations and the programs," Capps says. "We will, in my estimation, increase enrollment pretty rapidly and, once that happens, then our budget becomes healthier and then we can build up more stuff."

Polytechnic universities do offer specific STEM and applied science majors that other universities might not, and that's where the prestige comes from, says Barbara Shore, an independent admissions counselor based in the North Bay with more than 12 years of experience helping high school students through the college application process.

She says many of her clients — middle class, Generation Z students — are much more likely to look into STEM degrees with polytechnics in mind.

"This is a generation of students who are very much looking at, 'Will [this degree] help me get a job,' and parents are really emphasizing that, too," Shore says, "Many of my students are interested in Cal Poly (San Luis Obispo). That's the school. Unlike the other CSUs, that's not the backup school for them."

According to the CSU website, Cal Poly San Luis Obispo is among the seven most impacted CSU schools for undergraduate programs, pre-programs and undeclared/undecided programs for the upcoming 2021-2022 school year, meaning the number of applications received from qualified applicants by the campus is greater than the number of available spaces. The school has an acceptance rate of 28.4 percent. HSU's acceptance rate, meanwhile, is 92.2 percent.

And though Cal Poly Pomona has a higher acceptance rate than San Luis Obispo — 55 percent — its agriculture, engineering and science majors are impacted, meaning anyone who'd like to study those polytechnic degrees must have a very competitive admissions application.

HSU's polytechnic university designation would give students turned away from Pomona and San Luis Obispo another polytechnic option.

Shore says very few of her students apply to HSU unless they are looking into environmental science and forestry degrees, but adds the expansion toward other polytechnic programs would change that.

Although the hope is enrollment would increase with a polytechnic designation, Capps says HSU will never reach the size of the other two polytechnics, which each have about 20,000 students.

That's another aspect the self-study report will look at — what a healthy enrollment target for HSU would be and how the school would provide the facilities for the new programs and students. History has already shown that when enrollment peaks, housing becomes a huge problem.

In the 2015-2016 school year student enrollment hit its peak with 8,436 students enrolled — with most coming from outside Humboldt County — which led to an increase in housing shortages. The same year, HSU hired Brailsford & Dunlavey, Inc. to conduct a "student housing demand analysis for housing and residence life," which found the university's "housing portfolio" was undersized and aged, and that the surrounding Arcata housing market was so constrained that it left students to sleep in their cars or camp in the woods until they found housing.

"That will be part of our study is to see what's reasonable for Arcata and Humboldt County with our university, to be able to maintain that small-town, hands-on institution and be respectful of our community, of course," Capps says.

The self-study report will also highlight the potential partnerships and funding opportunities should the school be granted the designation.

Currently, HSU has partnerships between the city of Arcata, the Arcata Marsh and the Arcata Community Forest, however, polytechnic universities tend to have even more robust partnerships because their focus is to offer students hands-on experiences and teach them to solve real-world problems.

For example, Cal Poly San Luis Obispo's College of Food, Agriculture and Environmental Sciences recently received a $5 million donation from its industry partner Grimmway Farms to establish the Center for Organic Production and Research, which will focus on applied research in organic production and soil health.

"As a polytechnic institution with a statewide mandate, Cal Poly [San Luis Obispo] enjoys the support of strong collaborative partnerships with industry and government agencies, which are manifest through industry-sponsored senior projects and graduate theses, industry advisory boards for almost every major in every college, summer internships and extended co-ops, and industry-sponsored facilities for learning and applied research, just to name a few examples," Cal Poly San Luis Obispo Provost and Executive Vice President for Academic Affairs Cynthia Jackson-Elmoore wrote in an email to the Journal. "Through partnerships with industry, we can create learn-by-doing experiences that prepare graduates for leadership roles that harness technology to impact society. Additionally, our close partnerships with state and federal agencies allow for expanded funding opportunities for research and further experience for students who may be interested in a role in the public sector."

"Truthfully, what's come up is worry that somehow this means that we're going to end the liberal arts, social sciences and humanities programs," Capps says. "But we're not ending any programs because we're seeking a polytechnic designation. ... There's no defunding of the arts but rather a recommitment in making sure we have them and making sure that we continue to have strong programs."

Capps hopes HSU gets the designation by 2023 and becomes a fully functioning polytechnic university six years after that, potentially putting an end to the university's dire budgets.

HSU's enrollment has been declining for several years, with only 6,664 students enrolled in the 2019-2020 school year — about 1,000 fewer than the previous year — ultimately impacting the school's budget, as each student is a revenue stream.

Enrollment declines and the COVID-19 pandemic have pushed the school's deficit to a projected $20 million over the next two years.

"Right now, we have a double whammy: the non-COVID related decline of enrollment, then with COVID-19, more enrollment declined," Capps says. "So, we have a double decline in enrollment. The pandemic will end, things will stabilize and we'll still be declining because that's what was happening before the pandemic. We need to pump something in to make a shift and I think with us going forward with this polytechnic designation is the thing that shifts us."

Editor's Note: This story was updated from a previous version to correct the name of  CSU Chancellor Joseph I. Castro who was appointed after Chancellor Timothy White retired. The Journal regrets the error