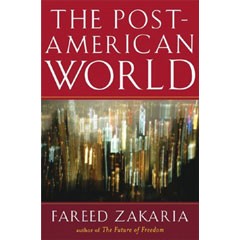 In The Post-American World, Fareed Zakaria shows us a world in which the "rise of the rest" -- the development of countries around the globe -- will not necessarily overtake the United States economically, politically or militarily, but will drastically change the current geopolitics.

"Look around," writes Zakaria. "The tallest building in the world is now in Taipei, and it will soon be overtaken by one being built in Dubai. The world's richest man is Mexican, and its largest publicly traded corporation is Chinese. The world's biggest plane is built in Russia and Ukraine, its leading refinery is under construction in India and its largest factories are all in China."

Zakaria looks at America's status as a superpower and draws upon history to determine how it can remain one. He uses this critical view of history to arrive at novel solutions to the new and utterly different problems of today. Zakaria believes the United States today is analogous in many ways to Great Britain at the turn of the 20th century. Britain in its prime had involved itself in similar politically misguided wars, including the disastrous Boer War in 1899, which he says is an obvious comparison to Iraq.

What is not analogous to anything ever seen are the two fastest-growing economies in the world, China and India. China, which Zakaria calls, "the challenger," has four times America's population and an economy that doubles in size every eight years. India, "the ally," has another billion people and, behind China, is the second-fastest growing country in the world. Zakaria highlights the economic challenges that the two nations pose for the world; however, he concludes that America's biggest challenge is political, not economic.

Published before the economic downturn, some of Zakaria's insights on economics have turned out to be remarkably prescient. He warns of the economic instability of the United States, due partly to the massive national debt, and writes about the inefficiency of the American auto industry. Their business methods have been hurting auto-manufacturers like GM, which is pertinent at a time when the United States has decided to loan the automobile companies up to $17.4 billion for their survival. Zakaria's publisher expects an addendum regarding these new events to be in the paperback edition scheduled for May.

Zakaria's style is smooth and straight forward. Ultimately, he is optimistic about America's ability to remain a global superpower, but warns that our political system "seems to have lost its ability to create broad coalitions that solve complex issues." Our politicians need not only to reach out to more countries more often, but also need to reach across the aisle more often -- as they used to -- to accomplish the political ends that we desperately need.