Photo by Zach Lathouris Dell Bryan and Joanne Kerr at their Jerk Kitchen restaurant in Eureka. 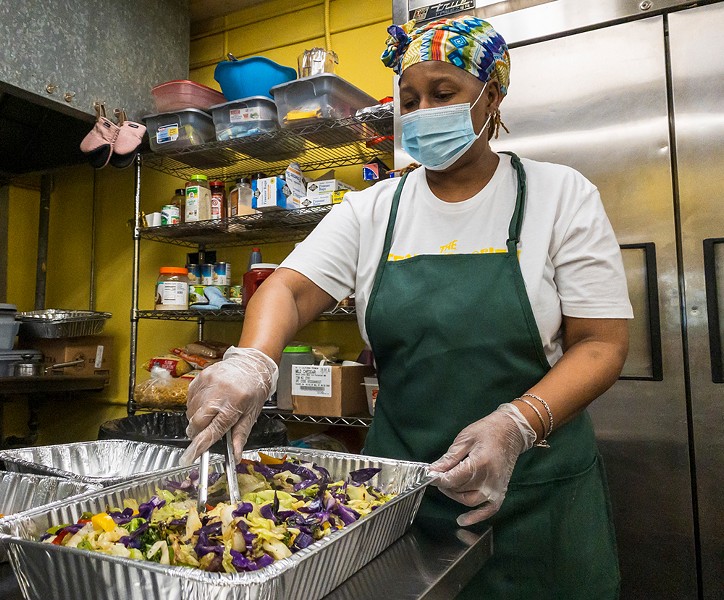 Photo by Zach Lathouris Dell Bryan grills the jerk chicken out back.

In Christiana, the rural town in Jamaica's Manchester Parish where his grandmother lived, Dell Bryan learned to cook from her.

His wife of 35 years, Joanne Kerr, explains they were both born in the capital city of Kingston, but "he would live with his mom in Kingston for six months, then she would send him to his grandmother in the country for six months." It was an enviable education, learning to butcher goats from his grandfather and shadowing Miss Ellie, as his grandmother was known, in the kitchen. The smell of her curries and stews would waft out the open windows. "Everybody would come by and say, 'Miss Ellie pots smell good,'" says Kerr.

"Everybody cooked," says Bryan. "My grandma's was special."

Those childhood lessons have served the couple well at Jerk Kitchen, the mobile catering business and popular farmers market stall that's now found a home in the former Rita's at 427 W. Harris St. in Eureka (407-0586). After signing the lease in February, Bryan and Kerr made the best of the unexpected shelter-in-place closure, renovating the space to get the kitchen up to code and the dining room painted. Officially open since Friday, June 12, the restaurant's tables will stay empty as they stick to takeout, at least for now.

"It all started with the [Arcata] market because everybody who came by wanted to know where they could get their chicken and ox tail during the week," says Kerr, who was surprised by local interest and knowledge about Jamaican cooking. As they built their following at the Saturday market and catering gigs, requests came in for specialties like the goat soup called mannish water for its supposed aphrodisiac quality or ackee and saltfish, the fruit and salted cod that is Jamaica's national dish and a Sunday breakfast staple.

The move to Eureka allows them to stretch out. "It's a big kitchen. Before when we was at the market, we used to work out of the Jam. We would go there in the morning and cook. ... It was nice but it was small."

Still, the menu will start slim, with rotating specials like stewed oxtail and chicken curry, along with their anchor, the jerk chicken. "Here now we get to do more stuff but, still, we're not doing all the food. Because Jamaican food is slow cooking," says Kerr. "We come in at 6 a.m. and we're gonna open at 11. ... We have to slow cook the oxtail and the beef and the goat. Then I'm gonna make vegetables ... then we gonna fry the plantains ... and the festival," she says, adding that the latter, a flour and cornmeal stick, similar to a hush puppy, is sweet and savory, and goes with everything. Bryan tells her not to forget the coconut rice and peas.

The jerk chicken takes the longest, marinating 24 hours before cooking low and slow over wood coal and hickory. Kerr describes the process in a slow drawl: "Jerk is the marinade that we put the chicken through but it's the seasoning — cinnamon, allspice, which in Jamaica we call it pimento seed or berry, garlic, thyme, scallions, onions. And the main ingredient in all Jamaican cooking is Scotch bonnet pepper."

"One of!" interjects Bryan.

"And other secret seasonings" he calls out, setting her laughing. "He is sooooo particular and if he doesn't have one ingredient he's having a heart attack." she says, chuckling. "I tease him all the time but that's why his food is so delicious."

Kerr is a lifelong cook, too. Kingston born, she left Jamaica when she was 7, following her parents who'd immigrated ahead of their children to Bushwick in Brooklyn, New York. "I was the oldest girl. I had an older brother and younger sister and both my parents worked," she says. "My mom did house keeping so she would go to Manhattan to the white people's and clean. My dad was a sign artist, my dad could draw and did billboards and signs." Kerr took on the cooking, making Jamaican dishes like chicken curry for her family every night.

It was in New York where she met Bryan, whose immigrant parents were able to bring him over at the age of 13. "He was a truck driver before all this cookin," she says. He started driving for Mayflower Moving at 17 and had been to Humboldt on the job and liked the feel of it. Eventually a few friends who'd moved to the area started pleading with him to come out and try to start a business "because there was nothing to eat," she says with more laughing. By then the couple had moved to Florida, where Kerr worked as an ICU medical assistant. There Bryan did a brisk business bringing oxtail and brown stew to her coworkers on the night shift.

Kerr and Bryan hope to bring the Jerk Kitchen stand back to the Arcata Farmers Market when they figure out the logistics. But for now they're open four days a week (Tuesdays, Thursdays, Fridays and Saturdays 11 a.m. to 8 p.m.) and daydreaming about expanding the menu to include corn and dumpling soup "with food in it," for when the cold weather comes. "When we say 'food,' it means ground provisions like potatoes, yams. ... Any Jamaican person would know."

Kerr and Bryan are hoping to do red snapper escabeche with red pepper sauce and Scotch bonnet once a month, maybe green banana porridge with cinnamon, vanilla and nutmeg. Some of the ingredients are harder to come by and Kerr says she's still having her son ship some from Florida. The spices don't come cheap but it's worth it to get the flavor right.

"Jamaica is poor," she says, "but they got high taste."

Jennifer Fumiko Cahill is the Journal's arts and features editor and prefers she/her pronouns. Reach her at 442-1400, extension 320, or jennifer@northcoastjournal.com. Follow her on Twitter @JFumikoCahill.