The Price of a Burger

Figuring out cost per plate (almost) like a pro 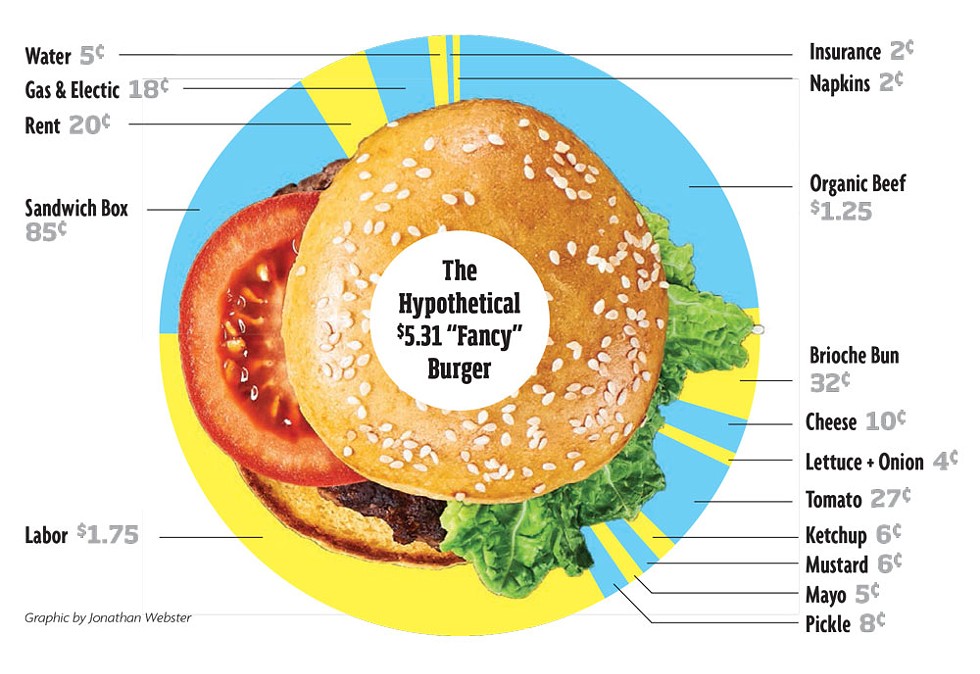 How much should your burger cost? Unless you've worked in the restaurant business, your sense of what your food is worth is largely intuitive, a range drawn from what you're willing to pay for it and what you've paid before. Did the whole experience of the burger — looking at it, tasting it, feeling satisfied afterward — feel worth it? Was it an Instagrammable moment? Did you have fun and did it feel indulgent or nostalgic?

I'm right there with you. I know what I'm used to paying and what sounds fair. Only when I engage my ingredient-pricing brain and scan the room and consider the overhead (read: fanciness and/or cleanliness) does logic and my limited math kick in. Somewhere my loathsome high school math teacher Mr. Larose is smirking.

While I admit my judgments are mostly guesswork, I'm continually astonished by Yelp reviews and Facebook comments in which people insist they've been ripped off because they could have made it themselves cheaper. To those people, I suggest staying home. Nobody wants to eat at the table next to you. For the more curious, the U.S. Small Business Administration has a handy online guide to help restauranteurs figure out cost per plate. Well, it's handy but not completely simple. Let's try it.

First, we need to list all the ingredients going into our burger. We're keeping it simple, so: ground beef, bun, cheese, lettuce, tomato, pickles, onion, ketchup, mustard and mayonnaise. (Note: The NCJ editorial staff is bitterly divided over the inclusion of mayonnaise but I include it here because Thad is wrong.) The next two steps involve figuring exactly how much of each ingredient goes into our finished product and how much that costs. A price check at Costco and Cash & Carry gives us some estimates.

Standard 88 percent lean ground beef is $3.69 per pound, or 92 cents per 4-ounce patty. Going organic? Add another 33 cents on there. A basic Franz hamburger bun is a mere 16 cents but if you are some kind of royalty and demand a brioche bun, it'll run you 32 cents. American cheese, for those of you keeping it real, is 10 cents per slice, though blowing it up with cheddar is about the same price per pound. Depending on the season, iceberg lettuce rings up at 3 cents per ounce (roughly the amount of shredded lettuce on a Big Mac). A burger's worth of tomatoes — let's call it four slices per medium vine tomato, two slices per burger — is 27 cents. Heinz organic ketchup is 6 cents per tablespoon (accounting for the last three tablespoons that are just never coming out) and a couple of teaspoons of French's yellow mustard come to about 6 cents. The mayo is 5 cents and the pickle slices are 8 cents per ounce and listen, don't be the place that skimps on the pickle. A slice of onion (about an eighth) is less than a penny, so we'll round up to 1 cent. Total it up and our basic burger comes to $1.74, while the upscale organic meat and brioche version is $2.23.

Let's say we price our fancy burger at $4.50 without a side of fries. According to the next step on the SBA website, our food cost rounds out to 50 percent. Sounds good, right? Until the next step comes in and crushes your dreams of 50 percent profit. Because now we have to figure out all the other costs involved in serving that burger. All of them. That means rent, utilities, payroll for cooks and servers, insurance, advertising, napkins, paper boxes and the burgers you and the staff eat on shift and/or on the sly. That's your overhead. (Sidebar: Mr. Larose, you were right and I do have to use math as a writer but I cherish memories of cutting your awful class and regret nothing.)

Joe Bean, co-owner of Z&J Asian Subs, operated a storefront in downtown Eureka a few years back and gave us some low-ball numbers to play with. For a small turn-key place with room for a handful of tables, let's say, optimistically, your rent is $1,200 per month. Utilities used to cost Bean somewhere around $1,100 for gas and electric, plus $300 for water. A basic insurance package plus workman's compensation ran him around $120 monthly (it's payroll based but we'll stick with it for our purposes). Let's say you've got the world's most efficient part-time servers working in pairs from 10 a.m. to 9 p.m., 11 hours every day at minimum wage, which is $10.50 per hour for businesses with fewer than 25 employees. You still need a cook on each shift for $11 per hour. Thirty days of labor, your biggest expense, costs you $10,560 with a skeleton crew. Your monthly overhead expenses total up to $13,280 per month, or $442.67 per day. That's with no advertising, nobody sneaking any burgers and a fairy godmother covering cleaning supplies, license fees and taxes.

And now our already mushy hypothetical numbers get mushier than a cheap bun with too much ketchup: How many of these burgers are we going to sell per day? Let's go with an ambitious 200, since that's what the SBA website uses. Spread out over the 200 burgers sold, your overhead adds $2.21 to each burger. Whoops, almost forgot the 85 cents for the biodegradable sandwich box (you're cheap but you're not a monster) and the 2 cents for a handful of napkins. Make that $3.08 in overhead costs.

Our food cost was at $2.23 but with overhead we're up to $5.31. Now you're losing 81 cents on that $4.50 burger. You want to make a buck instead? Either you're going to have to raise the price to $6.31 (a solid 16 percent profit margin) or use cheaper ingredients, unless you can find cheaper rent — maybe someplace haunted. If the ghosts can flip burgers, that would save some labor costs. Of course, if your haunted restaurant doesn't get the kind of foot traffic that moves 200 burgers a day, you're going to have to raise prices anyway.

Again, the numbers are mushy but still more solid than the emotionally based system most consumers apply when sitting down to a slim 4-ounce burger with lettuce, tomato, onions, pickles, mustard, ketchup, mayo (yes, Thad, mayo) and no fries in a little paper box with a couple of napkins. Don't forget to tip your server.