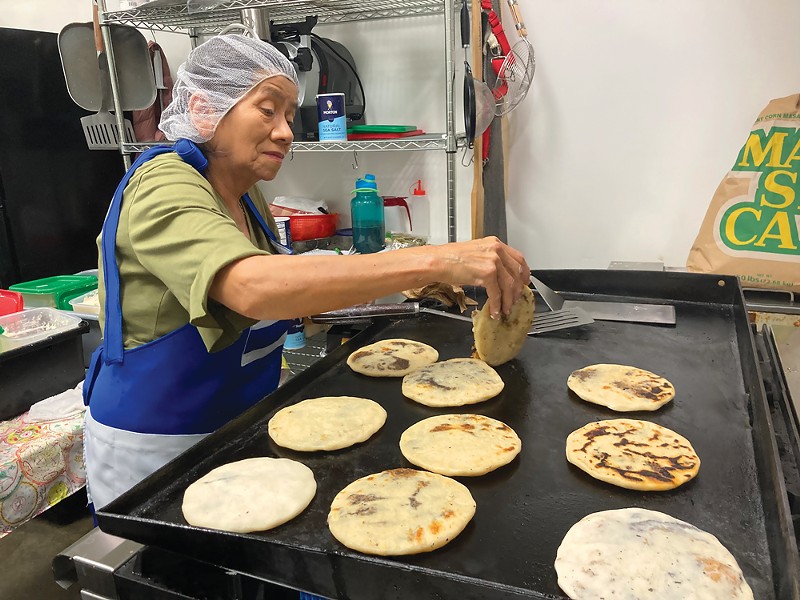 In the hallway of Arcata's Foodworks Culinary Center, a soft pat, pat, pat comes from the open doorway of Pupuseria San Miguel (100 Ericson Court, Unit 110). Inside the small kitchen, past the ersatz counter and behind a prep table covered with containers of masa, cheese and beans, Jorgelina Granados is passing a ball of masa stuffed with black beans and cheese from palm to palm, barely glancing down as she flattens it into a disc identical to the five already browning on the flat top beside her.

Watching her hold a lump of white masa in one cupped hand, press a knob of refried black beans into it and quickly shape it into a pupusa is like watching a card trick, but without the flourish — as close as you look, your untrained eye always misses the exact moment of transformation. It's a skill she says, with her son Gino translating, that she's practiced since she was 4 or 5 years old, helping her mother in El Salvador, outside San Miguel, where she grew up. On Saturday, she turned out more than 300 pupusas at Pupuseria San Miguel, the takeout business she came to Humboldt to open with Gino this month. According to Gino, the venture isn't so much about magic as it is hustle.

Jorgelina Granados immigrated to the U.S. as a young woman in the late 1970s, during a time of political tumult in El Salvador. Settling in South Central Los Angeles, she raised her son and daughter as a single mother. "She worked really hard, and she pushed us to work hard and get an education," says Gino. While she didn't finish high school in El Salvador, Jorgelina had gotten training for sewing and so found work at a clothing factory, where she was paid by the piece to make jeans and shirts, and made wedding and quinceañera dresses on the side. "She would do this whole package — she'd do the wedding dresses and the bridesmaid dresses, and get them the shoes," Gino recalls. And when she wasn't sewing, she was making pupusas and tamales to sell in their neighborhood.

Gino and his sister would help her haul a plastic container and knock on doors to sell the homemade pupusas and tamales. "But eventually, it became such a need that people would come to us." Fridays after work, the three of them would go to Olympic Market to buy corn husks and ingredients. "As soon as we got home, it was straight to work," Gino says, with the kids chopping and prepping. "She'd stay up all night cooking them and getting them ready by 9 a.m. on Saturday and we would hit the streets," with a hot pot of tamales packed in a nest of blankets in a folding cart they'd wheel to a park or the corner.

Once her children left home and graduated from college, Jorgelina moved around, packing frozen vegetables in Oregon, and working on the line in meat packing facilities in Kansas and Nebraska — grueling and often dangerous work. And wherever she went, she sold homemade pupusas, too. In 2019, Gino says she was thinking about moving again and they started talking seriously about turning her side business into a company and working for herself.

"She's always been such a hard worker, such a hustler," says Gino. "Growing up in a house without a man, I looked outside for a role model ... but I was looking in the wrong place because my mom is really my role model. If I could be a quarter of the hustler she is ... she's always been this entrepreneur. I always had the blueprint right in front of me." After earning a business and marketing degree from Humboldt State University, he returned to the county to work in human resources and later the cannabis industry before going back to now Cal Poly Humboldt for a master's degree in business. These days, he's chief operating officer at Culture Management, an umbrella company that covers a number of cannabis businesses — getting Pupuseria San Miguel off the ground is giving him a taste of his mother's juggling act.

Jorgelina is the majority owner of the pupuseria, Gino notes, and he sees his role as getting its systems set up and running smoothly so someone else can step in for him and his fiancée, Alohalani Hutchins, who handles the orders. "I will never be able to repay my mom but to have this opportunity to help her have her own business — I just feel so blessed."

Gino says he's gotten a lot of support and guidance from the Small Business Development Center in the form of classes and mentorship on everything from marketing, making a business plan, pitching to investors and talking about the product. Trying to calculate costs and pricing was a little tricky, despite the simple ingredients, since Jorgelina does everything by feel, mixing the masa and water into dough by touch and pinching off portions of filling by their weight and size in her fingertips. Gino says he had to snatch and weigh ingredients as she worked to figure out how much they needed and what the profits penciled out to.

The ingredients are simple but the prep is laborious. The black beans take three hours to cook in vegetable oil. It takes four hours to make the chicharrón — simmering pork butt shoulder until it releases enough fat to fry in the pot, cooling and grinding it with vegetables and spices to yield a rich paste. There's a vegan cheese option alongside the more traditional blend of mozzarella and a Central American cheese Gino says is a secret. There are a few add-ons, like chopped green buds of loroco, squash and jalapeño. But as flavorful as the smoky beans and chicharrón are, it's the exterior of the pupusa that steals the show — a tender dough that holds together through flipping, even at the thinnest parts where the stuffing is visible, but pulls apart easily to reveal a steaming stretch of cheese, simultaneously delicate and belly-filling.

So far, Gino says the response from customers has been enthusiastic, with people lining up and calling in for orders large and small. Demand has been high enough for them to revamp their system already — now they're asking customers to call in orders and reserve a pick-up time. But even working for herself, Jorgelina hasn't put aside her sewing business entirely.

"She plans to make my fiancée's wedding dress," says Gino.