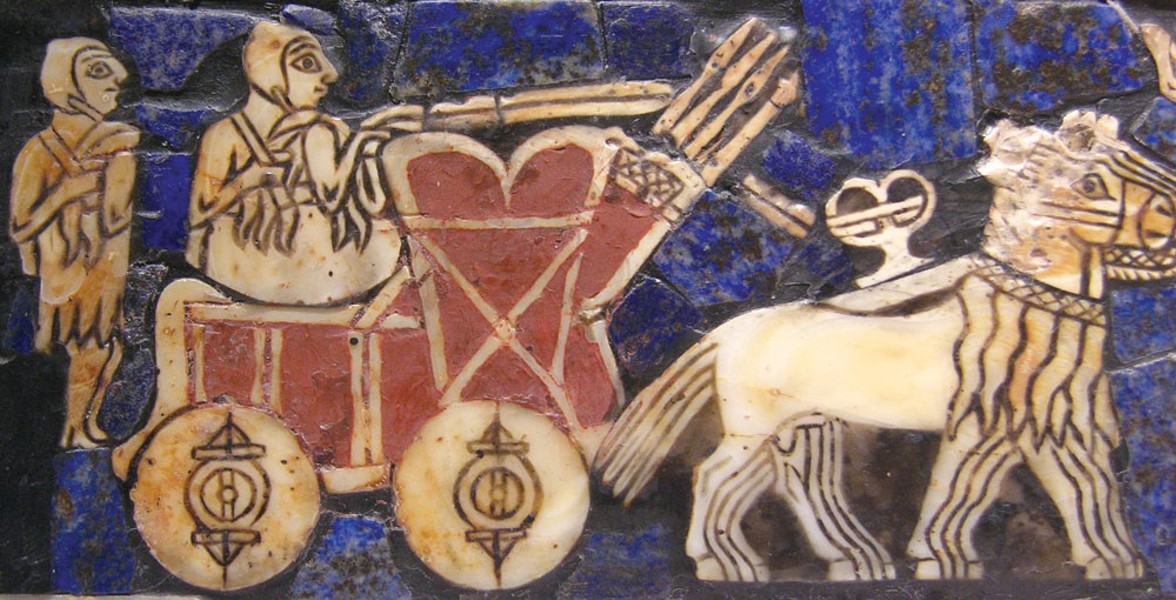 An onager-drawn cart on the Sumerian "Battle Standard of Ur," about 2500 BC. Wikipedia/public domain

Imagine a time machine has transported you back about 5,000 years to ancient Egypt, and you're watching a crew of workers wrestle with a big block of stone. They're building a tomb for some A-list dude — before pyramids, there were lower, simpler mastabas (flat stone platforms) — and their system for transporting the block from quarry to tomb is to roll it on logs. As the heavy block rolls off the rear-most log, a couple of guys pick it up and place it at the front, so the stone is always supported on three or four rollers. You say to them, "Wouldn't it be a whole lot easier if you replaced the logs with a flat cart on wheels?"

While the step from logs (cylinders) to wheels (discs) looks pretty obvious to us, it was a technological stroke of genius, one so big that the wheel may have been invented only once before the knowledge spread throughout Eurasia and the Middle East. The birthplace of the wheel is disputed: linguistically, the first use of the proto-Indo-European word for wheel came either from what's present-day Ukraine or from Turkey, depending on who's making the case. Archeologically, the earliest image of a wheel was found in Poland, while the oldest actual wheel is from Mesopotamia, dating to around 3500 BC.

The leap from roller to wheel had to wait for the invention of the metal tools needed to craft holes in wheels and shape the ends of axles. In order for wheels to turn smoothly, the holes and axle ends had to be perfectly round and smooth — snug enough to keep the wheel in place but not so snug to prevent it from turning. The earliest metal tools were cast from copper; copper chisels make their first appearance in the archeological record around 4000 BC, while tougher bronze had to wait for another thousand years.

That wheel found in Mesopotamia was probably a potters' wheel, which, being horizontal, didn't have to bear as much load as a vertical wheel on a cart. The introduction of potters' wheels would have been a huge boon to early pottery makers, who were then able to turn out (literally!) pots in far greater numbers than before. Clay pots — essentially rat-proof containers, and also water carriers — would have made the day-to-day challenge of survival much easier.

Once our inventive forebears had figured out how to mount a pair of wheels on the ends of an axle, carts drawn by onagers (wild asses) or oxen soon followed. The earliest wheels used for transportation were solid slabs of wood from mature trees. The next technological advance came around 2000 BC with the invention of the spoked wheel. Before then, solid wheels facilitated slow transportation; after, the new technology led to nimble horse-drawn chariots, the ancient equivalent of Panzer light tanks. Records left by both sides, Egyptian and Hittite, following the Battle of Kadesh (1274 BC), attest to the utility of these mobile war machines: Some 6,000 chariots clashed in present-day Syria on the banks of the Orontes River. The result was a standoff, with leaders of both sides, Rameses II and Muwatalli II, claiming victory for their forces.

Finally, fast forward around 3,000 years, when advances in metal technology led to the steel-spoked tension wheel, ubiquitous on early automobiles and on the most wonderfully efficient vehicles of all: bicycles.