Born in Eureka in 1946, Bob Talmadge moved to Willow Creek with his family at the age of 3. He moved through the local school system as a regular kid and a gifted student. Judy Skidmore, a classmate, wrote, "even as a child he had a commanding presence. He could transform from a serious thoughtful near adult to a teasing boyish rogue with a heartbeat."

An excellent wide receiver in football, it was apparent that he was exceptionally fast. Joe Beeson, the football coach and athletic director at Hoopa High School, asked his friend Buck Crosby to come over to Hoopa from the coast and coach the track team. Crosby wanted to coach Talmadge, so he took the job.

Hoopa High School, known for hard-knocking athletes, never had a great track and field facility. However, Talmadge had two assets most high school athletes in the sticks do not have. He had an inspirational coach and he was amazingly fast. In an interview, Crosby said that the first time he saw Talmadge run he was like a "colt," fast but awkward. But when he stretched out, the lanky redheaded kid was awe inspiring. When I was 8 years old, my dad took me to the HDN County Championships just to watch the "Red Streak" run. 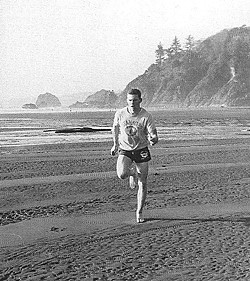 Crosby hardly ever missed a weekend of commuting his athletes to the coast and they trained in intervals on the soft sand at Clam Beach and Lanphere Dunes. At first, Talmadge couldn't run a straight line, but Buck taught him technique and high knee movement. Crosby went on to become an expert coach at all levels after the Talmadge years but the two remained great friends, the hallmark of a successful coach-athlete relationship.

On a cool evening at Humboldt State University in 1964, his junior year in high school, Talmadge was entered to run in the county championships in the 440-yard dash against John Burman, a local standout at Eureka High School who later became an HSU football hero. The matchup was the talk of local sports news and highly anticipated. Burman was extremely fast.

The two ran close until Talmadge pulled away late with his huge stride. It was the first time in league history anyone had broken 50 seconds in the 440-yard dash. They both did. By the time Talmadge finished his junior year in high school, he had run the 220-yard dash in 21.9 seconds and the 440-yard dash in 48.9 seconds, a county record. Since then, the distance has changed slightly to meters, the tracks are faster and spikes are lighter, but he is still at or near the top of the league's all-time historical bests. He had also nabbed a berth in the California State Meet and beat Burman, his two goals.

Things were tough in 1964-1965, the year of the flood. Talmadge caught mononucleosis and was unable to run his senior year, but Crosby took him to an AAU meet in the early summer in Redding. His unofficial 440-yard time was so fast that it reinforced to the San Jose State University track coaches that the kid from a remote corner of Northern California was the real deal. SJSU had become known worldwide as "Speed City," as many of the best sprinters in the world were attending school and training there. Talmadge was offered a track and field scholarship.

On campus were future Olympians Tommy Smith and John Carlos, and Lee Evans, the first person to run under 44 seconds in the 440 yards, along with many more elite runners. Talmadge became good friends and training partner with Smith, who was the fastest 220 runner at the time, and Talmadge himself had run 20.5 in the 220 in a time when no one in the world had ever broken 20 seconds.

In May of 1967, the West Coast Relays at Fresno's Ratcliff Stadium approached. Legendary coach Bud Winter, known for coaching a high knees and long-stride format, could only use four runners in the celebrated 4-by-220 (aka the 880 relay). SJSU had seven of the best 220-yard runners in the world. He chose Smith to anchor along with Evans, Ken Shackelford and Talmadge. 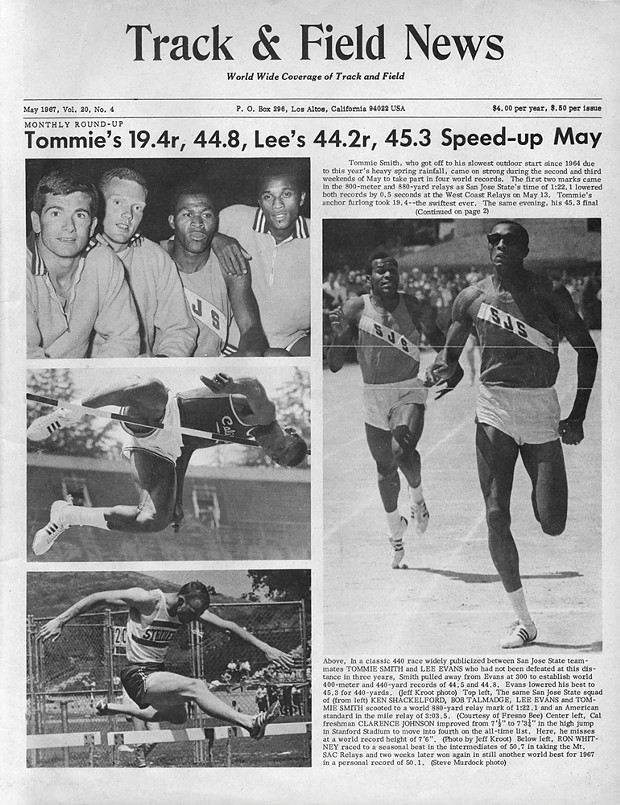 Running the third leg, Talmadge ran his all-time best split of 20.1, passing to Smith, who ran 19.5. Together the foursome broke the world record, a record they held for five years until the Italian national team, led by the legendary Pietro Mennea, bested it.

Paul Hewitt, a javelin thrower on the team said, "Tommy and Lee gave Bob credit for the record. When you have the two best sprinters in history praising you, that is special. We always had Tommy to watch and he was not of this world. But it was Bob who stole the show. Afterward everyone was talking about Bob and his relay leg in amazement."

Talmadge was the star on a relay team when anyone else would have been in the shadows of Smith and Evans. And on that one night, Talmadge may have been the fastest runner in the world.

The year after the record relay was 1968, a year marked by Civil Rights protests and the Mexico City Olympics. Talmadge had become a liaison for the Olympic team, a point man between the great runners, their coaches and the Olympic committee. Talmadge, like so many Americans, would never be the same. After the 200-meter race, Smith and Carlos, gold and bronze medalists respectively, donned black gloves and raised their fists in a Black Power salute from the winners' podium during the U.S. national anthem as a gesture to the struggle for equality back home. That night, Talmadge sent a telegram to Smith that for some reason he never received. Jan West, Talmadge's first wife, delivered its message 50 years later at a ceremony in San Jose. It had one word: "Beautiful." Upon hearing it, Smith broke down and cried, and walked away from the event.

After the Mexico City Olympics, Talmadge finished his double major in psychology and geography and went on a mission to Afghanistan. While working on a tuberculosis study there, he started the track team in Kabul. 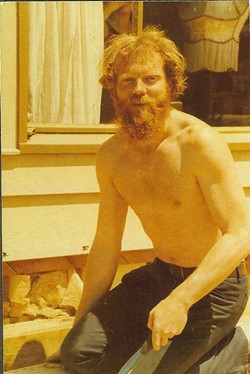 When he returned to the U.S., he became an ordained minister of the Liberal Catholic Church studying Christianity, Buddhism, Sufism and Judaism. He worked for many Humboldt County organizations. On the streets he became known as "Father Bob" and attended rallies, spoke at gatherings and completed a weeklong fast to call attention to hunger. Later in life, he also became a chaplain for U.S. Public Health Services, responding to Hurricane Katrina, and with his wife, Claire, served as a volunteer spiritual director and retreat facilitator for the Red Cross Project Vietnam.

His daughter Maya said that he taught her to love nature, music, compassion and spirit, that he was delighted by many things and passed that on to his children. Talmadge's obituary said he was "somewhat reclusive in his private life and held a place in his heart for those without voice, the poor, the oppressed, the mentally ill, children."

By then he had become Father Bob and the story of the Red Streak — the redheaded kid from Hoopa High School who rubbed elbows with princes and paupers, and broke a world record for himself and his community — had been somewhat forgotten.