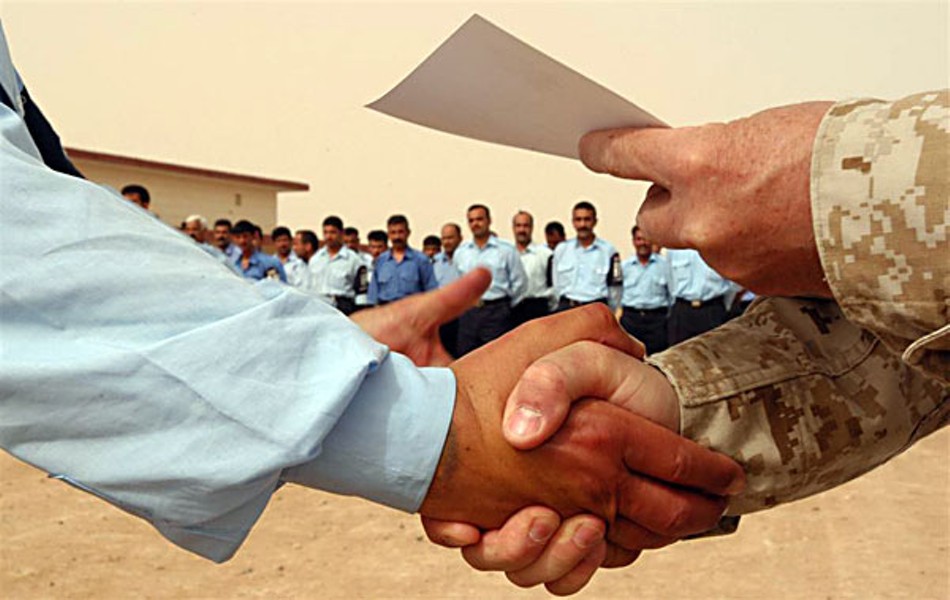 Right rules! A newly-graduated Iraqi policeman gets a congratulatory right-handshake from a U.S. Marine commandant while receiving his certificate with the left hand. Cpl. Paula Fitzgerald, Public Domain

By automatically offering my right hand when I meet someone new, I'm betraying my right-handed bias -- and that of my culture, since the hand that I shake is also the right one. In fact, almost all the world favors right over left. For instance, soldiers universally salute with their right hands. Tools are generally made for right handers and most writing is left to right, which favors right-handers. Today most products -- from subway turnstiles to coin phone boxes to cameras to corkscrews -- are designed for the right-handed majority.

When I was at school in England in the 1950s, lefties were discriminated against: writing with the left hand was discouraged and even forbidden. (Happily, that's changed.) Many cultures avoid touching food with their left hands for sanitary reasons. In a court of law, you'll be asked to raise your right hand before giving evidence.

Christianity is decidedly pro-right from the get-go. God reaches out His right hand to touch Adam's left, giving him life, in Michelangelo's fresco on the ceiling of the Sistine Chapel. "And when Joseph saw that his father laid his right hand on the head of Ephraim, it displeased him." (Genesis 48:17). Why? Because Ephraim was the younger brother. The firstborn, Manasseh, should have received the favored right-hand touch. Christ "sitteth on the right hand of God," as do the saved sheep, while the goats (that is, the damned) are relegated to God's left en route to everlasting fire.

Language is particularly adept at reminding us that southpaws* are a 10 percent minority. Our word sinister, for instance, comes from the Latin for "left," while dexterous is from Latin "right." (The actual word right is from rectus, that is, straight or just.) A left-handed compliment is insincere. An alright guy is, well, alright. French for left, gauche, has found its way unchanged into English as a synonym for clumsy, while droit, right, comes through as a noun, as in the motto of the royal arms of Great Britain, Dieu et mon droit, God and my right. Left in Italian is mancino (maimed), while in Portuguese it's canhoto (weak). A Spanish left-hander is a zurdo, from azurdos, go the wrong way. Arabic simal means both "left hand" and "bad omen."

Other primates are either ambidextrous or tend to left-handedness, so how did we acquire their right-handed bias? One speculation is that if an early human tried to defend the heart (on the left) with some sort of shield, their weapon would naturally have been held in the right hand. (According to legend, Amazons cut off their right breasts, which might otherwise have impeded their sword arms.) Another hypothesis is that humans' predominant right-handedness results from our capacity for language, a specialization found in the left hemisphere of our brains.

Both these ideas are just speculation, and why we favor right-handedness is yet another question science has to resolve. What's your theory?

* Southpaw: Left-handed pitchers face west in a regular baseball diamond (laid out so batters avoid looking into the afternoon sun), so their pitching arms are towards the south.

Barry Evans wonders how the morning baristas in Old Town Coffee and Chocolates always know to give him a right-handed coffee cup.

CAPTION: Right rules! A newly-graduated Iraqi policeman gets a congratulatory right-handshake from a U.S. Marine commandant while receiving his certificate with the left hand. (Cpl. Paula Fitzgerald, Public Domain)