The Right to Gather 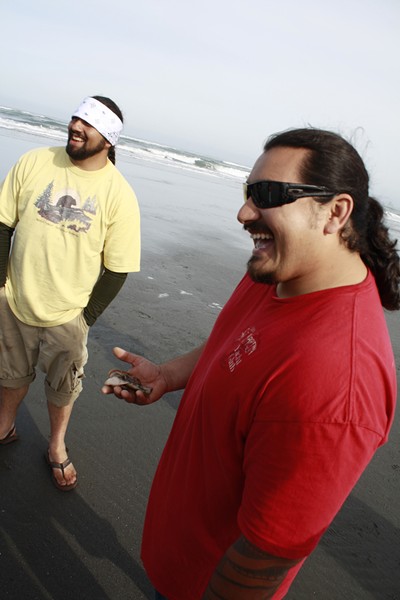 Photos by Zach St. George Frankie Myers holds a clam while his brother R.L. Myers looks on. Craig Tucker caught the clam – he’s not part of any tribe, and he was happy to show his fishing license. 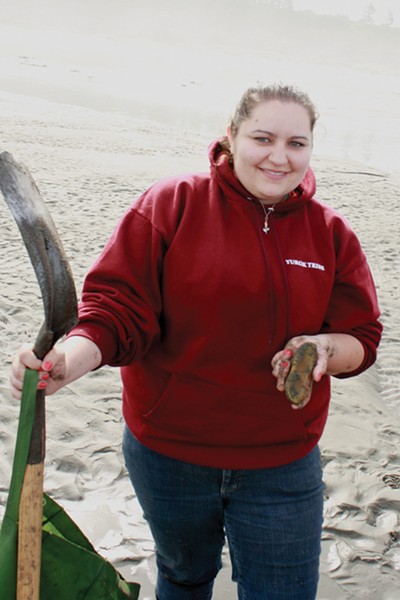 Rosie Clayburn pulled a yellowish razor clam from her bag and held it up to show the tribal members gathered around her. She wore rubber boots pulled up over her jeans, and the sleeves of her maroon Yurok Tribe sweatshirt were wet and flecked with sand. "I... don't have a license," she said nervously.
"Good!" exclaimed Dania Rose Colegrove, also of the Yurok Tribe.
"I just have my tribal I.D.," Clayburn said.
Tribes up and down the North Coast hit the beaches on Saturday morning to protest the Marine Life Protection Act (MLPA), which they say doesn't acknowledge their right to traditionally gather marine life. Between 90 and 100 members of several tribes attended informal gatherings at Patrick's Point, Clam Beach, and Wilson Creek in Del Norte County, said organizer Bob McConnell of the Yurok Tribe, while some went individually to their traditional gathering grounds to show support.
Tribal groups are using the MLPA as a rallying point to demand that the state government leave them alone when they harvest marine life according to their traditions. They argue that any regulations or license rules should not apply to them, and they want the MLPA to reflect that. They want the state to accept their tribal identification, instead of a fishing license or any other required documents, when they harvest mussels, clams, seaweed and more.
The MLPA, which aims to reorganize and improve the quality of California's marine protected areas, was adopted by the state legislature in 1999, but languished until 2004 when private donations jump-started its implementation, according to Susan Ashcraft, a senior biologist with the California Department of Fish and Game. She said that earlier protected areas had been arranged haphazardly, and in some cases only gave the impression of protecting marine life. The MLPA aims to rearrange the protected areas into a network, said Ashcraft, so that protected, pristine webs of life will dot the entire coast of California.
"The goal is to have intact ecosystems," said Ashcraft.
A team of scientists evaluated the protected areas and made recommendations to Fish and Game, focusing particularly on what happens when one or more species is depleted or removed entirely. The science team developed a scale of species, based on their relative importance in each ecosystem. "Backbone" species such as clams, mussels and seaweed, which provide habitat for other species, were deemed especially important. The scientific team recommended that harvest of those species be well-controlled and extremely minimal, Ashcraft said.
"The science team did not consider the rate of [harvest]," said Ashcraft, "or who is doing the taking."

Craig Tucker, who works for the Karuk Tribe, said that neither the Legislature nor the foundations that helped fund the implementation of the MLPA fully considered the demands of native groups.

Saturday's event was part of a final push by the tribes to assert their claimed rights. On June 29 and 30, the Fish and Game Commission in Stockton will hear recommendations on how to accommodate tribal groups in the MLPA North Coast section, dubbed Region 4, which stretches from the Oregon border down to Alder Point in Mendocino County. Several options regarding native harvesting rights are currently on the table. All would allow tribal members to gather marine resources in state marine parks and state marine conservation areas, while two would exempt state marine reserves. All the options would also allow recreational harvest by non-natives, and would still require that tribal members buy a license.

Ashcraft said that even if the Department of Fish and Game wanted to allow the tribes to harvest without a license, state law prohibits giving individuals or groups exclusive rights to harvest.
McConnell said that is unacceptable. "We are not just like the rest of the citizens of California," McConnell said. "We are members of a sovereign nation. We have inherent rights to do this and we want them recognized."
Being allowed to gather, and gathering by right are not the same, he said. "We don't want to be lumped in with recreational users. We are different than recreational users."
To underscore that point, on Saturday a group of around 20 tribal members and their non-native supporters started the morning at Patrick's Point State Park. They gathered baskets of seaweed, which isn't allowed in state parks, and they didn't pay for admission to the park.

As she walked along the trails overlooking the water, Karuk Tribe member Kathy Barger stopped frequently to point out different plants. "This one is used to make baskets. ... You can wrap your salmon in this. ... This one is used to make dye." Barger came all the way from Happy Camp in Siskiyou County to show her support. "It's our tradition," she said. "The ability to gather food has always been our right. Now we're being forced to buy our food in the store."

Patrick's Point, Clam Beach and Wilson Creek are not and won't become protected areas. The protesters chose those sites to make the point that they believe they are entitled to gather marine life anywhere along the coast, regardless of government restrictions, McConnell said.
From Patrick's Point, the group headed to Clam Beach. Their quiet defiance probably went unnoticed by the crowds of recreational clam diggers. Clayburn, with her handful of clams, was the only one of the group that had any success. She said that she digs frequently -- Saturday was her fifth time clam digging that week -- and she said she doesn't typically carry a license. "The only time Fish and Game stopped me, they just measured the clams," she said.

Fish and Game was aware of the protest, but did not ask any of the people involved for their fishing licenses, according to department spokeswoman Jordan Traverso. She said that hundreds of clam diggers were out at one of the sites on Saturday, and enforcement officials would not have routinely demanded licenses from all of them.
The conflict between Fish and Game and native people is often more dramatic, said Colegrove. She has run into trouble for deer hunting without a license. "I've been caught for poaching six times," she said. "This is nothing new to me." The last time she got caught, she said, her guns were confiscated and she was forced to pay more than $3,000 in fines.
She doesn't see subsistence hunting or gathering as poaching, and said she isn't likely to stop any time soon. "I'm getting food," Colegrove said.

The bottom line, according to Yurok Tribe member Frankie Jo Myers, is that the tribes see the MLPA because it is the latest in a series of actions by the state of California that assert control over the native people who live here.
"We're never going to stop harvesting, regardless of what they say," Myers said. Native people believe that nature is not nature without humans. "Because we love the natural system, we have to stay a part of it."