The Rise and Fall of Klamath County 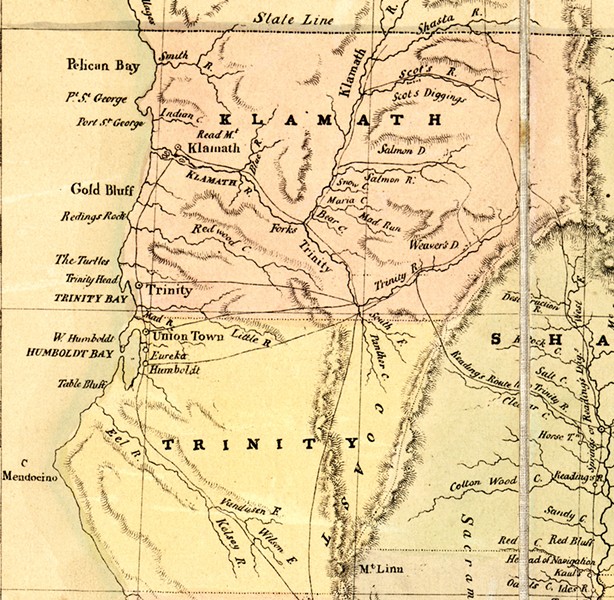 Public domain Portion of "A newly constructed and improved map of the State of California: shewing [sic] the extent and boundary of the different counties according to an act passed by the Legislature April 25, 1851." — J.B. Tassin, cartographer and compiler.

Living, as my wife and I do, in Old Town Eureka, we're very aware we're on the land of the Wiyot, whose territory once extended from Little River to the Bear River ridge south of the Eel. Tribal borders were strictly adhered to — especially if the neighboring tribe was unfriendly — but it took the coming of Europeans to mark off the land with actual lines on actual maps. A year after California became the 31st state of the Union in September of 1850, our part of the world was officially divvied up into counties. From the settler point of view, Wiyot country was now part of Trinity County, as you'll see from the accompanying 1851 map. Two years later, Humboldt County was carved off from Trinity.

Between the north boundary of Trinity County (roughly on the line of School Road in McKinleyville) and the Oregon border lies a less familiar county name: Klamath. In its short life, 1851 to 1876, the county represented a quarter century of bureaucratic snafus. For one thing, the southern boundary of Klamath, defined as the latitude of the mouth of the Mad River, was unstable. As anyone familiar with the area knows, the mouth moves a bit farther north each year.

That was a minor problem. A bigger one was the question of where to establish the county seat. Trinidad was the natural choice: It had a harbor, where two Spanish ships had made landfall in 1755, erecting a cross on Trinidad Head near the Yurok village of Tsurai. By 1851 the cove had a small European settlement, so Trinidad, with its protected bay, became the first county seat. Just three years later, it was moved to Crescent City, which was growing exponentially as a staging depot for supplies carried by packhorses and mule trains to gold mining camps to the east. Three years later, in 1857, miners based at Orleans Bar (modern Orleans on State Route 96, on the Klamath) successfully petitioned for the county seat to be moved there, despite its remote location.

All these changes might not have changed the map of California but for Klamath County's mounting debt, which by 1855 was $25,000. According to local historian Jerry Rohde, "the books were in disarray and a large amount of money was unaccounted for by the sheriff. The Board [of Supervisors] levied no tax for the year and none had been collected the previous year." Meanwhile, Crescent City re-established itself as a county seat in 1857 by a simple expedient; its residents created a new county, Del Norte, thereby depriving Klamath of its territory north of the Klamath River.

Finally, in 1874, with Klamath County debt-ridden, under investigation by a grand jury (an election yielded more votes than voters) and practically lawless (the sheriff being "absent"), officials asked the State Legislature to disestablish it. The process took a couple of years due to bickering over who would assume the county's debts but by 1876, it was all over, and Klamath County was no more.

Barry Evans (he/him, barryevans9@yahoo.com), who has lived in this county since 2001, still has to meet the Count of Humboldt.