The River and the Serpent

Winding along at Dell'Arte and Ferndale Rep

by Pat Bitton and David Jervis 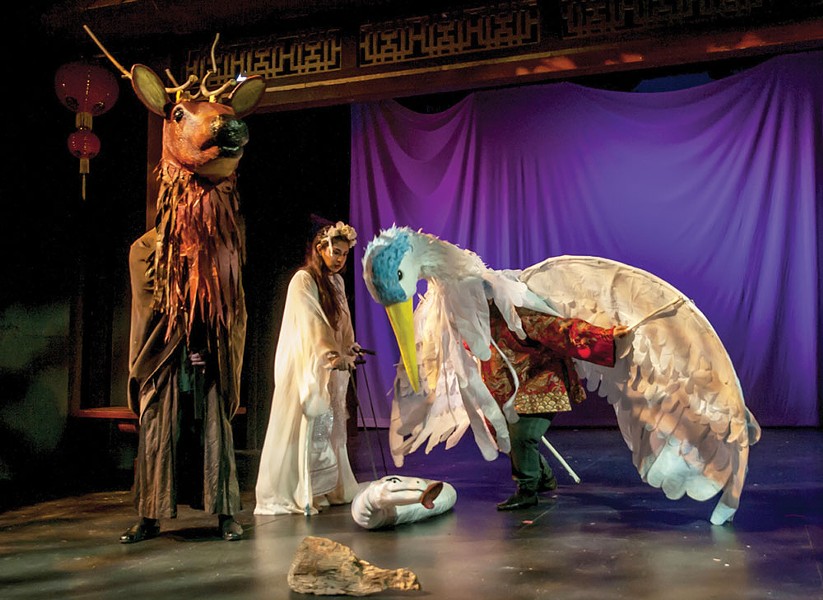 It's been said that water is today's oil/gold/your choice of valuable commodity. Water is a lot simpler — and a lot more complicated — than that. It may be just endlessly recycled dinosaur pee, but it's also integral to the web of life — something we've become all too aware of in the past few years.

The Big Thirst, this year's signature Mad River Festival production, asks what happens when greed, political ambition, tribal culture, wildlife and social activism all stake their claims on this precious resource. A serious subject, for sure, but because it's a Dell'Arte show from the pen of founding Artistic Director Joan Schirle, we get to untangle the mystery through music and rapid-fire comedy.

Driving the story is bumbling private detective and amateur animal rescuer Dolly Madison of DissGuys Detective Agency (the versatile Janessa Johnsrude). Older sister and budding detective novelist Ladybird Madison (a very prim and proper Sarah Peters) provides a running commentary throughout as she attempts to match Dolly's story to the advice in Twenty Rules for Writing Detective Stories (an actual publication from 1928 — check it out, it's very entertaining). Baby sister Abby (Kaitlen Osburn), who claims she was named after Dear Abby rather than another dead president's wife, is a delightfully naïve activist out to save the world (or at least its riparian habitats).

Our story begins with a high-speed chase (incorrectly, according to Ladybird's rulebook) and a red herring (of course). On opening night, rain brought an appropriate but fortunately brief unplanned intermission, but the ever-resourceful Dolly soon got things moving again ("Previously, on The Big Thirst ..."). After a hasty wipedown of the stage, a besequined black bird (a particularly playful Pratik Motwani) bursts through Dolly's office window in a barrage of bad crow puns and the news that her missing keys are down by the river bar. But when she goes to retrieve them, the river has — gasp — disappeared. And so the quest for the missing water begins.

Along the way, we meet Jake (James Peck), resident haiku spouter at Moondough's Café, incompetent heavies Heckel (Peck) and Jeckel (Motwani), ambitious tribal member Jean (Claudia Johani Guerrero), and the owners of Fabulous Farms, Louie (Peck) and Melinda (Allie Menzimer), who are planning to hybridize two of the most water-hungry crops on the planet. If all goes according to plan, the farmers' success is assured, thanks to their partnership with a certain Ronald Trumpet (a bravura performance by Donald Forrest).

But what does all this mean for the river? A little (shiny black) bird may hold the answer, with a little help from an expert on multiple personality disorders (Michael Fields in his usual cameo appearance).

Trios of sisters are an oft-repeated motif in literature (think Chekhov, Lear's daughters, even Cinderella), and Humboldt now has its own subgenre going — last year it was Amy Stewart's Kopp sisters, this year it's Joan Schirle's Madison sisters. And these three are a particularly entertaining crew that not even the rain can put a damper on.

The Big Thirst runs at the Rooney Amphitheatre at 8 p.m. Thursdays through Sundays through July 3. Call 668-5663 or visit www.dellarte.com.

From antiquity through the middle ages, myths and folktales from around the world tell of spirits and beings who assume human form, either to observe humanity or as malevolent tricksters. The White Snake, now playing at the Ferndale Repertory Theatre, has its roots in just such a tale, dating back thousands of years as a traditional Chinese spoken fable first put to paper in the 14th century Ming Dynasty. Tony Award-winner Mary Zimmerman, who has a carved out a niche over the past couple decades with theatrical adaptations of classic works ranging from The Odyssey and Arabian Nights, debuted The White Snake at Ashland's Oregon Shakespeare Festival in 2010. Taking something deeply archetypal to a modern staging offers its rewards, but it's a high-wire act.

In our story, the White Snake (Amber Cuevas) has resided in the skies for centuries, cultivating knowledge enough to take human form. A meeting with the sassier and more forward Green Snake (Isabella Ceja) leads to the pair hatching a plan: Come down they shall from the clouds and visit the world below, taking form for a day among the mortals. But the earthly plane being what it is, that day turns into many, with unforeseen events in abundance.

White Snake, encouraged by her green-clad cohort, soon marries the earnest, sincere young man Xu Xian (Gino Bloomberg, in possession of some sharp comic timing). The trio works at a thriving apothecary business and soon the couple have a child on the way. Complications soon ensue due to the machinations of Fa Hai (Hanah Toyoda), the scheming abbot at a nearby monastery who has his ideas about exactly who is fit to be married to whom. (Snakes in human form happily wed to actual humans? Not cool with him.) The bit gets in some good jabs at hypocrisy.

The White Snake is burdened with some material and elements that leave it moving in fits and starts — narration by members of the solid ensemble, including Hanah Toyoda and Heather Karns in several roles, work well at the beginning and end, but seems like an unnecessary layer of exposition at other points. And a running joke meant to be some sort of elbow-in the-ribs about the "rules of Chinese theater" seems like it came from a different play going on somewhere down the hall.

What buoys The White Snake admirably enough are the performances from its young cast and most notably the creative visuals overseen by director Catherine L. Brown and scenic designer Raymond Gutierrez, which includes some eye-popping imaginations of pouring rain, shimmering rivers in springtime and bustling city streets. The White Snake tightens up its energy and focus in second act and, to its credit, the story eventually concludes with notes of greater poignancy and frankness than one might expect. And that's a savvy burnish, because a fable dating back centuries should leave you with more to think about than when you took your seat.

The White Snake plays at the Ferndale Repertory Theatre in Eureka on Friday and Saturdays at 8 p.m. through July 9, with Sunday matinees at 2 p.m. on June 26, July 3 and July 10. Call 786-5483 or visit www.ferndalerep.org.

Camp, communism and brunch collide when Redwood Curtain Theatre serves up Five Lesbians Eating a Quiche from July 7 through 30. The comedy imagines a 1950s meeting of the Susan B. Anthony Society for the Sisters of Gertrude Stein. A quiche is a quiche is a quiche. Call 443-7688 or visit www.redwoodcurtain.com.