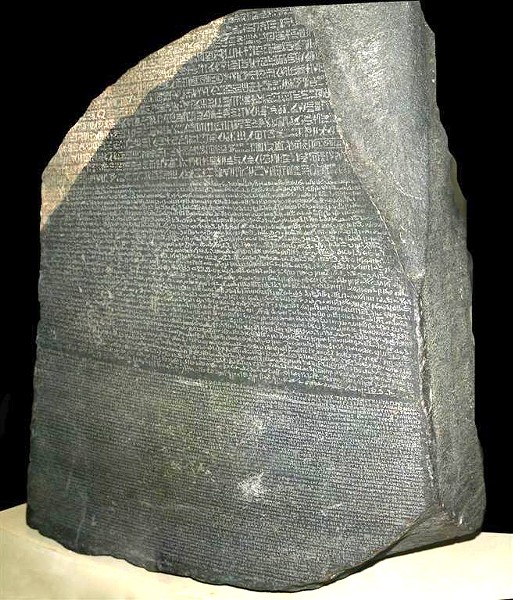 Public domain. Part of Champollion's table of Greek, demotic and hieroglyphic characters, from a letter written in 1822

A four foot-by-two foot-by-one foot chunk of dark-grey granite is the most visited object in London's venerable British Museum. The Rosetta Stone, which has been on display there almost continuously since 1802, was discovered by a French soldier in the wall of a 300-year-old fort in Rashid (Rosetta) in northwest Egypt. For centuries, Arabic and European scholars had struggled to understand Egyptian hieroglyphics, since the art of writing and reading them had been lost around the end of the 3rd century CE. The Rosetta Stone gave them just what they needed: an inscription in three scripts, one of which was hieroglyphic.

Lieutenant Pierre-François Bouchard was a member of Napoleon's expedition to Egypt when he spotted the slab in July 1799. Within days, members of Napoleon's corps of "savants" -- the 167 scientific experts who accompanied the army -- were already speculating that the scripts were versions of the same message. Two years later Napoleon's troops surrendered to British forces and the stone -- now an object of war booty -- was shipped to London in a captured French frigate.

Although copies of the inscriptions were immediately made available to scholars throughout Europe, decipherment of the hieroglyphics took another 20 years. The most significant contributions were those of Englishman Thomas Young and Frenchman Jean-François Champollion. Young discovered in the hieroglyphic text the phonetic characters "p t w l m y s" used to write the Greek name "Ptolemaios" (Ptolemy). Champollion followed this up with what today we write as Cleopatra, and by the end of 1822 he had constructed an alphabet of phonetic hieroglyphic characters (see table). From there, it was downhill.

The stone comprises about two-thirds (the rest is broken off and lost) of a stela dated to 196 BCE. It was erected on behalf of newly-crowned 7-year-old Ptolemy V, whose great-great-grandfather had been one of Alexander the Great's generals. He inherited Egypt after Alexander's untimely death in 323 BCE. Since the Ptolemaic dynasty was Macedonian, the official language of the day was Greek, hence the Greek text on the stela. However, Ptolemy V came to the throne in a period of turbulence in Egypt, at a time when many different political factions had to be appeased. The most powerful of these was the priestly clan of Memphis, so the stela -- which essentially confirms the divinity of Ptolemy V -- was diplomatically inscribed in the ritual "language of the gods" (hieroglyphic), as well as everyday Egyptian (demotic).

If you're in London and haven't already seen it, do stroll over to the British Museum -- it's still free! -- and admire the object which, more than any other, was the catalyst for our modern understanding of the late, great world of ancient Egypt.