The Sentencing of Marci Kitchen

With guilty pleas in place, uncertainty still surrounds how much time the Fortuna mom faces 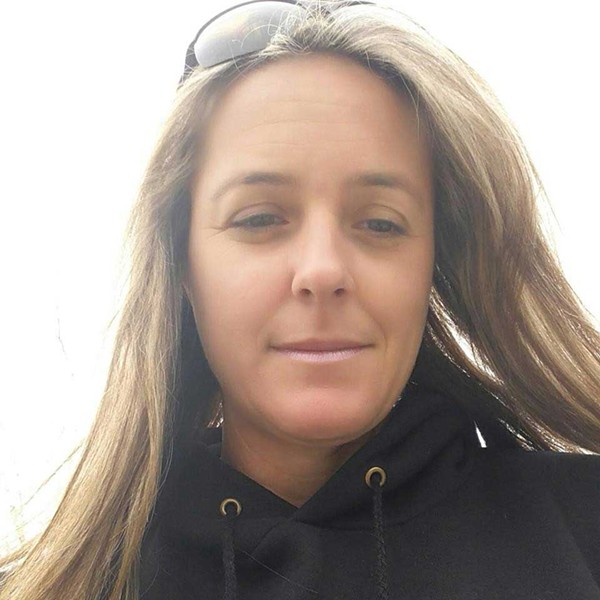 Just weeks before her trial was set to begin, Marci Kitchen stood in front of Judge Kaleb Cockrum on Monday and pleaded guilty to fatally hitting two teenage girls, including her daughter, while driving drunk in 2016 and fleeing the scene of the crash.

Wearing a black and white brocade-style dress with a suit jacket, Kitchen spent the nearly hour-long proceeding with her hands clasped in front of her, either looking ahead or down at the floor, appearing at times to hold back tears.

She softly answered, "Yes, your honor," her voice sometimes wavering, as Cockrum asked a series of questions about whether she understood the legal implications of pleading guilty to vehicular manslaughter and DUI causing injury, along with the special allegations that she caused the girls' deaths and fled the scene.

Behind her, quiet crying could be heard in the otherwise hushed courtroom filled with family members of Kiya Kitchen and Faith Tsarnas — who were both 14 when they were struck from behind while skateboarding on Eel River Drive on July 12, 2016.

Tsarnas died at the scene and Kiya Kitchen's death followed a day later at a Bay Area hospital she had been flown to following the crash.

Now more than two years later, after numerous delays and continuances, the case that left a tight-knit community reeling may be headed for an abrupt conclusion with Kitchen's decision to give up her right to a trial. But a number of uncertainties remain, including how much prison time — if any — she will receive and whether her plea will stand.

None of those in attendance chose to address the court.

The judge explained that Kitchen's decision was predicated on him sentencing her to the mid-term cap of two years for the principal charge of vehicular manslaughter while intoxicated without gross negligence. Cockrum noted that Kitchen's maximum exposure in the case was a "point of contention," with the defense asserting it was 10 years and four months and the prosecution placing the total at 11 years.

Cockrum said he will consider the probation report, the stance of the district attorney's office and input from family and friends of the defendant and the victims in making his final decision at her Sept. 18 sentencing, any of which could "convince" him a harsher sentence is in order.

"If I do consider the four-year high term (on the principal charge), I will give you your plea back," Cockrum told Kitchen, meaning her guilty plea would be withdrawn and the case would once again head to trial.

After the hearing, Kitchen was escorted from the courthouse by deputies for security reasons, according to Sheriff William Honsal, who said the security detail was provided at Cockrum's request due to the emotionally charged nature of the case and threats of violence that Kitchen has received.

The Humboldt County Sheriff's Office also "sequestered" her before the proceedings for the same reasons, rather than having her stand in the courtroom hallway with the large assembled group, where other deputies were also stationed for a time.

"We just wanted to make sure, even though we have courthouse security and screening, that everyone feels safe, so we wanted to have a presence there," Honsal said.

Eads cited Marci Kitchen's role in the "tragic deaths of two young girls" and her efforts "to cover up the crime" — apparently referring to reports that she hid her damaged Jeep and tried to persuade her son not to speak with investigators.

Both told the judge she was a flight risk, with Holmquist-Wells noting her ability to pay a $750,000 bail has allowed her to remain free for the 770 days since the girls were killed but Kitchen has now essentially been convicted and faces a decade in prison.

"The only logical decision is to remand her into custody," Holmquist-Wells told the judge.

Kitchen's attorney, Deputy Conflict Counsel Meagan O'Connell, argued against a jail confinement, saying her client has abided by "every bail condition" and has had periods of travel from which she "returned as planned." O'Connell added that Kitchen has surrendered her passport.

Cockrum set a Sept. 4 custody hearing on the matter.

But the question that remains — ultimately to be decided by Cockrum — is how long of a sentence, if any, should Kitchen receive under her pleas.

While all the charges, special allegations and enhancements Kitchen faces carry a combined maximum penalty of 35 years, California sentencing law is complex and Kitchen's exposure in this case has always been substantially less.

California has a three-tiered sentencing structure in felony cases, meaning judges choose from three potential sentences — a minimum, a mid-term and a maximum — for each charge, depending on whether they find circumstances that either aggravate or mitigate the crime. Under extraordinary circumstances they can also grant probation in most cases.

In Kitchen's case, Cockrum noted factors including the vulnerability of the victims, the seriousness of the injuries she caused and the defendant's attempts to interfere in the investigation on the aggravating side and her lack of a criminal record, not being on parole or having a prison strike as mitigating her case.

Things get a lot more complicated when a defendant is convicted of multiple offenses. When that happens, in the vast majority of cases, the judge will sentence the "principal" offense — or the one deemed most serious. Then, he or she is bound to impose sentences of one-third of the mid-term for each subsequent count for which the defendant is convicted, and can opt to impose those either concurrently, meaning they don't add any additional time to the sentence imposed for the "principal" offense, or consecutively, meaning they would stack on top of one another, elongating the total sentence.

In Kitchen's case, the principal count is the manslaughter charge — meaning the three subsequent counts must each be sentenced at one-third of the mid-term sentence, which would be two years and eight months for count two, three years and four months for count three, and one year for count four. But even that is unlikely — and possibly illegal — in this case, according to a legal expert consulted by the Journal.

University of California Hastings College of Law professor David Levine said the charges in Kitchen's case overlap, meaning there are multiple counts charging Kitchen with the same underlying conduct. That's a problem when it comes to sentencing as the law only allows someone to be punished once for a specific act.

Looking at Kitchen's case, Levine said it can certainly be argued that all four counts essentially charge the same crime, which was driving drunk, killing the girls and fleeing the scene.

"You're not going to get hit (at sentencing) with two counts where there's substantial overlap," Levine said, adding that Cockrum, who was appointed to the bench in February, will have a lot of discretion as to how he sentences the case and whether to impose concurrent sentences for the four counts.

Cockrum made reference to that law during Monday's hearing, saying it would be "up to the court to decide whether (Penal Code) 654 applies in this case."

Another factor that will likely determine how much time — if any — Kitchen spends in custody is recent changes to California's sentencing laws under prison realignment and Proposition 57. Specifically, while most people sent to state prison will only serve half their sentences if they receive credits for good conduct, Proposition 57 lowered that to a third for certain "nonviolent" offenses, including vehicular manslaughter, meaning that Kitchen may serve only a third of whatever sentence is ultimately imposed by the court. That means even if she is sentenced to the 11 years prosecutors believe to be the maximum allowable, she could be free after serving three years, eight months.

Regardless, Eads said Monday that the mid-term cap was not an offer from the district attorney's office, as she had previously made clear about Kitchen's decision to waive her right to a trial and plead guilty, saying: "The people have offered nothing."

Timeline of the Kitchen Case

July 12, 2016 — Kiya Kitchen and Faith Tsarnas are struck by a car while skateboarding on Eel River Drive in Fortuna. Tsarnas is pronounced dead at the scene.

July 21, 2016 — The California Highway Patrol announces that it is seeking Marci Kitchen for questioning, calling her a person of interest in the case.

Sept. 15, 2016 — The district attorney's office files a complaint charging Marci Kitchen with vehicular manslaughter without gross negligence and DUI causing injury, with special allegations that she caused the girls' deaths and fled the scene after the crash. Kitchen is booked into jail and released after posting $750,000 bail.

May 10, 2017 — Judge John Feeney finds there is sufficient evidence to hold Marci Kitchen to stand trial.

Feb. 28, 2018 — Marci Kitchen's private attorneys Patrik Griego and Ben Okin withdraw from the case after she runs out of money to pay them. The county's conflict counsel's office is appointed to represent her.

Aug. 20, 2018 — Marci Kitchen appears in court and officially pleads guilty as charged in the case.

Sept. 4, 2018 — A custody hearing is scheduled to determine whether Marci Kitchen should remain free on bail until her sentencing hearing.