The Shape of Zoophilia 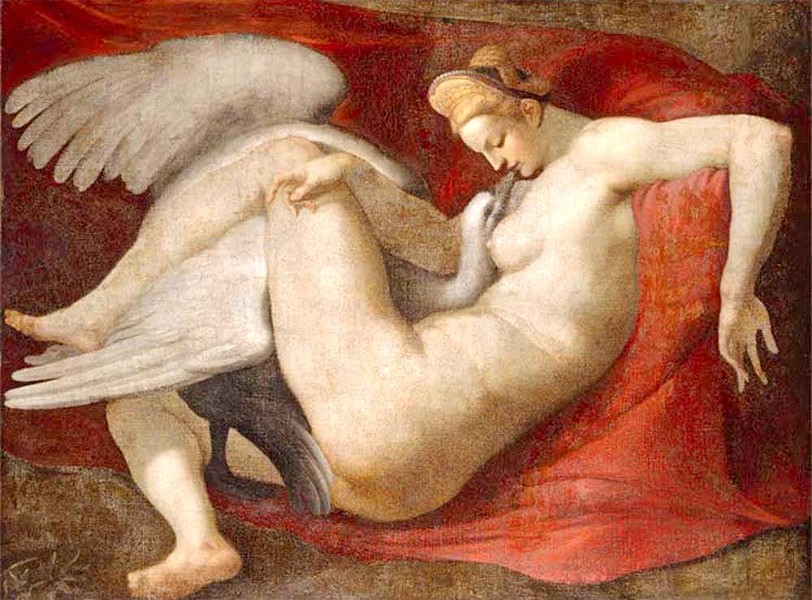 Public domain. Copy of Michelangelo’s lost painting “Leda and the Swan.” The god Zeus took the form of a swan in order to seduce Leda, queen of Sparta, resulting in two eggs, one of which hatched Helen of Troy, “whose face launched a thousand ships.”

The Shape of Water, an Oscar-winning romance between a latter-day Creature from the Black Lagoon and a mute cleaning lady, can be summed up in a word: bestiality. The stuff of countless jokes, Puritan laws and erotic art, bestiality comes with its own morality playbook and taboos. Like prostitution (supposedly the oldest profession), bestiality was well known to the ancients. From the Greek tale of Leda and the Swan (Zeus in disguise) to wall paintings in Pompeii (including Pan copulating with a goat) to the no-holds-barred temple carvings in Khajurajo, India, humans have long fantasized with the idea of inter-species sex.

Not just fantasized. The 1948 Kinsey Report estimated that 8 percent of men and 3.6 percent of women had gotten it on with animals (upping that to 40-50 percent of people living near farms). Does that make it normal? Today's codified guide to normality, the Diagnostic and Statistical Manual of Mental Disorders (DSM-5), lumps zoophilia (which sounds nicer than bestiality) within its "other specified paraphilic disorder" category, paraphilia being "a condition in which a person's sexual arousal and gratification depend on fantasizing about and engaging in sexual behavior that is atypical and extreme."

As an animal lover — emotionally, that is, not physically — my concern is all about the animals. Can an animal give consent to having sex with a human? Not verbally, of course, but the case, for example, of a dog initiating sex with a willing human is hardly the typical image of animal abuse. I'm a fan of ethicist Peter Singer, whose 1975 book Animal Liberation led to my not eating meat for the past 40 years. Singer points out that taboos about sex between humans of the same gender ruled until quite recently — including earlier versions of the DSM — and that taboos about consensual sex with animals may well fall away in the future.

California's criminal code doesn't differentiate between animals that consent, as far as an animal can, and those that don't. Sex with animals ("sexual assault in the fourth degree") carries a penalty of a maximum six months in jail and/or $5,000 fine. You have to wonder what the guardians of our morals would have done about sex between non-human Neanderthals and Homo sapiens 50,000 years ago. We know they, er, cohabitated, because most of us non-Africans are walking around with 2-4 percent Neanderthal genes in our bodies.

What about when inter-species sex doesn't involve humans? Now we're talking about an even nicer word: hybridization. A 2007 report in Nature magazine claimed that 10 percent of animal species and 25 percent of plant species hybridize — mostly giving rise to infertile offspring such as mules, the offspring of male donkeys and female horses. Sometimes, though, the offspring of two distinct species are fertile, leading to a new species, especially if the number of chromosomes match. (Mules have 63 chromosomes, a mixture of the horse's 64 and the donkey's 62, which is why they're infertile.)

As for The Shape of Water: I loved it, best movie of the year so far, do see it!