The Shock Doctrine: The Rise of Disaster Capitalism 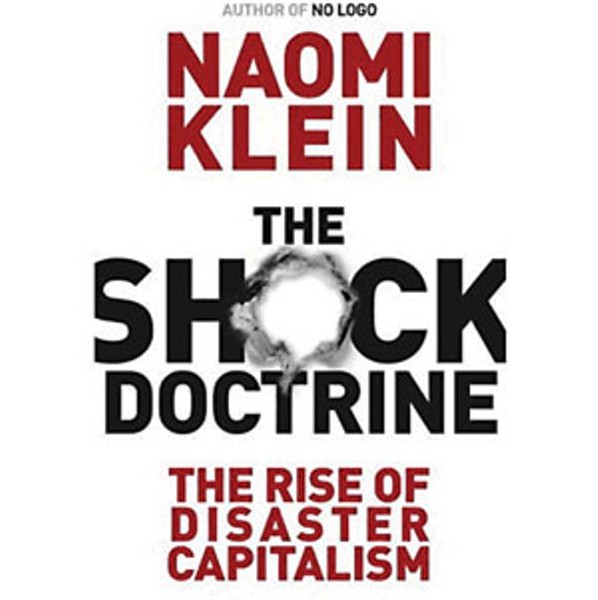 The Shock Doctrine: The Rise of Disaster Capitalism

In a 1989 article in The National Interest, the neoconservative political economist Francis Fukuyama declared that humanity was witnessing “the end of history.” With the Cold War winding down and Soviet Communism unraveling, “Western liberal democracy” had won the battle of ideologies, argued Fukuyama. People throughout the world were choosing deregulated free market economies and democratic political systems. Changes in the world were not leading to a “convergence between capitalism and socialism, as earlier predicted, but to an unabashed victory of economic and political liberalism.”

Fukuyama’s argument summarizes perfectly the official historical narrative that so many of us have been taught. In this version of events, unfettered capitalism triumphed because it was the will of the people. Their yearning for democracy was in fact a yearning for the wholesale privatization of government social services. Their desire for freedom from government harassment: a desire for the end to government involvement in the economy. It was a peaceful, popular revolution in favor of deregulation and privatization.

Naomi Klein’s The Shock Doctrine is a direct challenge to that version of events. She argues that “free markets” and free societies do not always go hand-in-hand and that, in fact, the triumph of an increasingly fundamentalist form of capitalism “has consistently been midwifed by the most brutal forms of coercion, inflicted on the collective body politic as well as on countless individual bodies.” She illustrates this point throughout her book with examples of how wars, coups d'etat, terrorist attacks and natural disasters have been used to shock populations into accepting privatization and other economic liberalization measures.

Klein draws a fascinating comparison between these methods of collective softening up and the sadistic experiments conducted in the 1950s by a CIA-funded doctor named Ewen Cameron. His experiments on psychiatric patients involved sensory deprivation, the use of barbiturates, and electroshock, among other things. The goal was to “treat” psychiatric patients by essentially erasing their minds, thereby creating blank slates for the creation of new people. It ended up being quack science -- rather than getting a new start, patients were irreparably damaged.

Like Cameron, laissez-faire economist Milton Friedman was obsessed with the idea of the blank slate. As one of the most influential proponents of "economic shock therapy," Friedman urged policymakers to use major upheavals and disasters in order to push through unpopular free market policies. He finally had the opportunity to see his regressive economic dogma put into practice when General Augusto Pinochet overthrew Chile's government in 1973 and made himself president. Pinochet's army killed and tortured thousands of civilians as a team of Friedmanite economists worked to remake the economy.

The tragic story of Chile is one of many in this book. Klein mixes on-the-ground journalism and extensive research to show how the shock doctrine has been implemented in a number of other countries, including our own. From Tiananmen Square to Boris Yeltsin’s shelling of the Russian White House to the tsunami that hit Sri Lanka in 2004 to the terrorist attacks of Sept. 11, 2001, to Hurricane Katrina and beyond, Klein shows how upheaval and uncertainty have been exploited to benefit the wealthy and powerful.

Unlike so many other writers of the same genre, Klein’s style is engaging and understandable. She is not a stuffed-shirt academic -- she’s an activist, and it shows in her writing. If this book has a weakness it is, perhaps, Klein’s apparent belief that the “shock doctrine” is something new and that she has cracked the case. While Milton Friedman’s cold, calculating brand of capitalism is especially disgusting, the use of collective trauma for political and economic gains was around long before he was. Klein hasn’t discovered something new so much as she has explained how a very old strategy is manifesting itself in even more atrocious ways. Still, this is an extremely well written, enlightening book, one of the best by a left-wing author in the last decade.