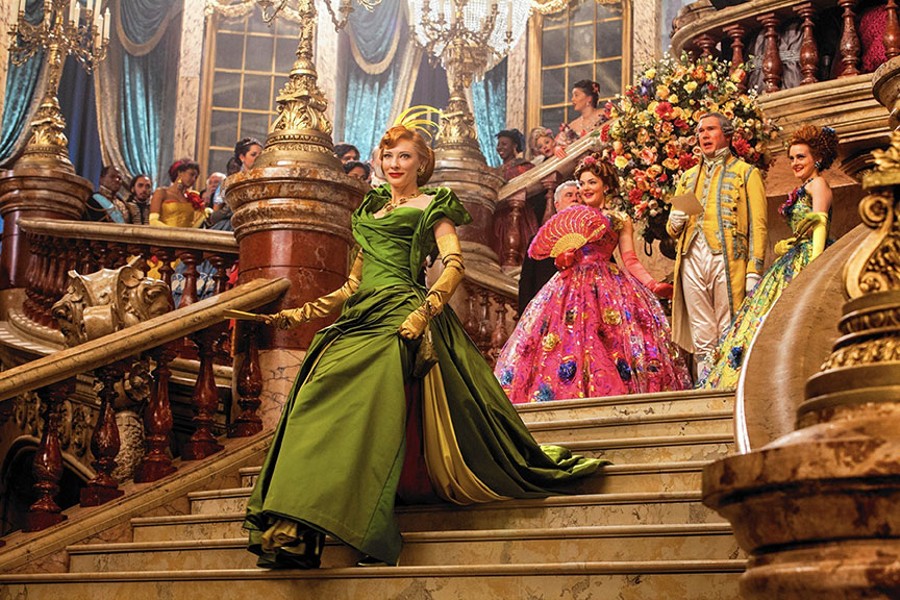 The ball don't start 'till I walk in.

The ball don't start 'till I walk in.

CINDERELLA. For the last few years, fairy tale adaptations have been coming out of Hollywood like gases from a putrefying corpse. The image may be strong, but from Red Riding Hood (2011) to Jack the Giant Slayer (2013) to the particularly odious Into the Woods (2014), these movies have done little more than signal the ongoing creative death of mainstream American cinematic art. They also serve as further indicators of Hollywood's execrably low confidence in today's screenwriters and insistence on the relative box-office security of retreads. Even the half-clever ones like Maleficent (2014) rely completely on star-power and effects to take the place of originality. So went the background narrative in my head as I awaited the opening of Cinderella. And although it retells the most familiar story, it does so with enough charm, composure and atmosphere to appeal to even my jaundiced eye.

Just for a refresher, that story we all know so well goes like this: Young Ella's mother dies and her father re-marries to an elegant widow (Cate Blanchett) with two idiot daughters. When he dies, Ella (Lily James), now a young woman, is relegated to a cruelly nicknamed servant girl by her step-relations, with only a drafty attic, some pet mice and her memories to call her own. One day, Cinderella flees the house in desperation and runs into the woods, where she encounters (and leaves a distinct impression on) a handsome young fellow who conceals his identity as the prince of their kingdom (Richard Madden). The prince, also motherless, faces the impending death of his beloved, ailing father. Despite some machinations from within the king's court, the prince intends to spend more time with the girl he met in the woods, so he throws a ball and invites every maiden in the land. Cinderella's wicked steps aren't having it, and conspire to keep her home. This, of course, is where her Fairy Godmother (Helena Bonham Carter) finally makes an appearance, rewarding the girl's essential kindness with a knockout ball-gown and some kicky glass shoes. I think we all know how it ends. (Someone wisely chose to omit the section in the source material where the stepmother cuts off parts of her daughters' feet to make them fit the shoe in question).

It is no small task to make something new from a story that is so much a part of our cultural consciousness, and director Kenneth Branagh (Thor, Mary Shelley's Frakenstein) has exceeded expectations. His affinity for Shakespearean pageantry is evident, and it suits the material: The costuming and production design are sumptuous and spot-on, creating an atmosphere of transporting depth. His visual style, sometimes a little formalistic for more modern or faster-paced subject matter, lends a dignified, classic-Hollywood air to the movie. There are stretches that could move more briskly for my taste, but even the deliberate pacing between and within scenes feels in line with Branagh's intentions. James gives legitimate emotional life to the protagonist. Blanchett, well, she's the best in the business, so no surprises here. PG. 113m.

RUN ALL NIGHT. As much as I like the fact the Liam Neeson has become the sexagenarian badass of the moment, as much as I admire his tireless work ethic and dedication, I think we reached the saturation point a couple of Takens ago. But I don't get to make those decisions, so here Neeson comes again as an alcoholic widower with an estranged adult son, a heavy case of murderer's remorse and one night to set it all right.

Jimmy Conlon (Neeson) has spent most of his life pulling people's cards for his friend/boss Shawn Maguire (Ed Harris). His work has destroyed his marriage, his relationship with his son Mike (Joel Kinnaman) and his emotional well-being. It hasn't done him any favors financially, either. When Mike sees Shawn's bad-news coke-head son Danny (Boyd Holbrook) murder a couple of Albanians in a business deal gone bad, he's in trouble. When Jimmy kills Danny to protect Mike, they're both in even bigger trouble. Shawn mobilizes his army of goons, including corrupt cops and a cyborg-like contract killer (Common), to kill the Conlons. Jimmy enlists the aid of a police detective (Vincent D'Onofrio) who's been hunting him for two decades to clear Mike's name and his own conscience. There follows much running and shooting, none of it particularly remarkable.

Run All Night has a few visual and narrative flourishes to distinguish it, but not enough to elevate it beyond weekend rental status. R. 114m.

DIVERGENT SERIES: INSURGENT. Sequel to the teen dystopian YA adaptation. With Shailene Woodley and Theo James as the young rebels. PG13. 119m.

THE DUFF. Teen makeover comedy about a girl (Mae Whitman) who finds out she's the Designated Ugly Fat Friend in her group. It's like Mean Girls never even happened. PG13. 101m.

FOCUS. A charismatic Will Smith plays a con man in a paint-by-number heist movie with some fun moments and too few surprises. R. 104m.

JUPITER ASCENDING. Gorgeous trademark visuals and a wreck of a story from the siblings Wachowski. With Mila Kunis, Channing Tatum and a stylishly villainous Eddie Redmayne. PG13. 127m.

KINGSMAN: THE SECRET SERVICE. Funny, charming Taron Egerton steals the show in this imaginative action comedy about a street punk who becomes a spy. With Colin Firth and Samuel Jackson. R. 128m.

MCFARLAND USA. The story about a cross-country coach (Kevin Costner) hits all the marks so that even the expected triumphs yield a few tears. PG. 128m.

SECOND BEST EXOTIC MARIGOLD HOTEL. Maggie Smith and Judy Dench are back for the sequel as Brits abroad. PG. 124m.

SELMA. David Oyelowo is a fine MLK, but the director pulls punches on violence and realistic bigotry, diminishing the impact of this biopic. PG13. 128m.

THE SPONGEBOB MOVIE: SPONGE OUT OF WATER. He of the square pants leads his undersea crew onto land in this animation and live action mash-up. PG. 93m.

UNFINISHED BUSINESS. This David-and-Goliath business trip comedy tries too hard for both edginess and warmth, touching on big topics and abandoning them before any real risks or enough real laughs. R. 91m.