The Soul in the Melody 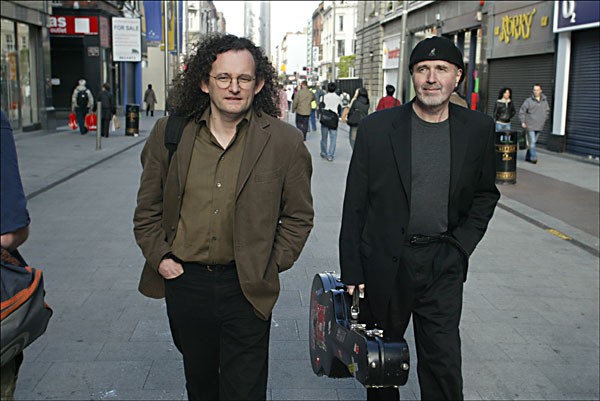 By the time you read this, Irish fiddler extraordinaire Martin Hayes will likely be at home in Connecticut preparing for next week's West Cost tour with his guitarist music partner Dennis Cahill. But last weekend Hayes was back where he came from, in County Clare, Ireland playing at something called the Tulla Traditional Music Festival. He and Cahill did a couple of shows there, but Hayes also played a gig with the Tulla Céíli Band, a trad Celtic group once led by his father. "I play with the band often and it's a touchstone experience," said Hayes in an e-mail from Tulla. "It brings me back to my start point in music so it's a reality check."

What does "traditional" mean in the context of a festival in County Clare? "It means celebrating the music of the locality in an effort to ensure its continuity," said Hayes, but, he added, that doesn't mean he plays differently for American audiences. "I want the music to speak universally and it does. I want to play what I feel and believe and I want that to happen whether it's in Tulla or San Francisco [or Arcata]. So I don't change my music. However, peoples' ideas of 'traditional' vary greatly within Ireland and obviously vary in the rest of the world. But I don't believe that people's ideas of what the tradition is should have any bearing on how they experience the music. In my way of looking at this, it's first and foremost music, and secondarily it's part of a tradition."

What does it mean to be a traditional musician in the ever-changing musical landscape of 2009? "For me, personally, I continue searching musically for opportunities to get deeper into the music, and that means deeper into my own playing, into my ability to find the soul and expression in the melody, and I just continue to try and break down whatever barriers exist for me," he concluded.

Those who want to see where Hayes and Cahill have taken the music of County Clare will want to get advance tickets to their Humboldt Folklife show at the Arcata Playhouse next Wednesday, Sept. 23. Martin will also be in town Tuesday evening for a master fiddle class at the Playhouse. Interested? Call 822-5394 or send an e-mail to maia@humboldtfolklife.org.

Tradition was also on the mind of Soviet-era choreographer Pavlo Virsky back in 1937 when he founded the State Folk Dance Ensemble of the Ukrainian SSR -- in particular, those trad dances involving guys in puffy pants leaping wildly amid swirling flocks of women in long colorful dresses. His troupe was renamed the Virsky Ukrainian National Dance Company after Pavlo's death in 1975. They'll be at the Arkley Center Friday night.

Back in May I noted that Grammy-winning country diva LeAnn Rimes would be playing the Arkley Center, and that her show was guaranteed to sell out far in advance. It did. (It's next Tuesday.)

Speaking of Grammy-winning divas, The Mariachi Divas are coming to the Sapphire Palace Saturday night. While your typical mariachi is a guy in tight silver-studded pants, a bolero jacket and a sombrero, this group, founded by trumpeter Cindy Shea 10 years ago, is different: It's all women. The Divas' latest disc, Canciones de Amor, took home a Grammy for Best Regional Mexican Album earlier this year, but the band's repertoire is not all trad -- e.g. their smooth cover of the old Malo hit, "Suavecito."

It's official: hard-working blues-rock band Saint John and the Sinners was voted "Best Band in Humboldt" in our reader poll. Catch them Friday at Central Station or on Saturday at Nocturnum where a "Rap ’n' Rock Rhythm Rumble" pairs them with local hip hoppers Hiway and L.C.A. They also invite you to, "bring your rhymes to the freestyle rap open mic."

Tight on their heels in the voting was the ever-funky Moo-Got-2. The beat's the thing for MG2, with bassist Aaron Drago and drummer/vocalist Darin Mitchell laying down endless deep grooves to be layered with sax, keys and guitar. Their show Thursday, Sept. 17, at Arcata Theatre Lounge is billed as "Moo-Got-2 vs. Deep Groove Society," with The Middle Agent and DJ Touch adding their beats to the dance mix. MG2 sax man Chris Noonan has a busy weekend planned. After the ATL show, he'll join Sonoma County funksters Critical Measures Trio for two shows: Friday at the Wave, then Saturday at Humboldt Brews. He's been regularly turning CM-3 into a quartet according to guitarist Todd Bugbee, and don't be surprised if MG2 keysman B Swizlo shows up for the HumBrews thing.

Thursday has been jazz night at the Jambalaya of late, but this week they have Gravy, playing what piano man Aber calls "corn-fed funk music" with members of Bump Foundation and Vintage Soul.

It's tribute weekend at the Red Fox. First on Thursday, a tribute to the music of Frank Zappa with Pojama People, featuring guitarist Ike Willis, a Zappa alum. Friday and Saturday, it's a two-night run by Live Dead, "the San Francisco Bay Area's extreme Grateful Dead tribute," who promise three sets each night.

While the Dead played at Woodstock four decades ago, their set ended up on the cutting room floor in the movie (Jerry is interviewed briefly) -- likewise in Woodstock: 3 Days of Peace & Music (The Director's Cut) -- but you can see them in the deluxe 40th anniversary version. The Director's Cut airs Friday at the Arcata Theatre Lounge, presented by the Humboldt Film Commission. They've inviting concert attendees to speak midway through the 225-minute marathon and offering door prizes, including that deluxe 40th anniversary DVD set. Costumes are encouraged, so break out the tie-dye and beads, or roll around in some mud.

Saturday at the ATL marks the debut of Splinter Cell, a rockin' trio with bassist James Forbes from Buffy Swayze and Arrogant Hare, etc., drummer Jeff Langdon from The Hitch, Fire Demons, etc. and guitarist Sean Ennis from Iron Rain, Artifacts of Pleasure, etc. (All are former members of Henpecker.) Being an up-to-the-minute outfit, they already have a Facebook page (guess MySpace is out) and plans for a record on James' label, Meth Bog. They share the bill with Portland's blue-collar underground rockers The Underlings (another Meth Bog band) and local alt. somethings Nipplepotamus.

"Revolution NOW!" a show at the Arcata Community Center on Saturday (6 p.m.-midnight) is described as "a music concert and political event aimed at social, political and environmental injustice." They promise a mix of reggae and hip hop, including sets by the vegan rap duo stic.man and M-1 aka Dead Prez, Yay Area hyphy ambassador E-40, NYC politi-rapper Umi, San Diego hip hop crew Swisher Streets, Trinidadian reggae star Queen Omega and Jamaican dancehall DJ Sister Nancy with Humboldt dancehall by Jah Tory up first. Your host for the evening is Chairman Fred Hampton Jr., son of Fred Hampton, a young Black Panther Party leader killed in a Chicago Police raid in 1969 just weeks before Fred Jr. was born. After spending nine years in jail, Fred Jr. now heads the Prisoners of Conscience Committee, an organization he describes as, "the great grandchildren of Garvey, offspring of Malcolm and the cubs of Panthers." Should make for interesting between-sets banter.

Last: Don't forget it's North Country Fair weekend. Details in the calendar. See you there.