The Sound Guys: Edison and Berliner 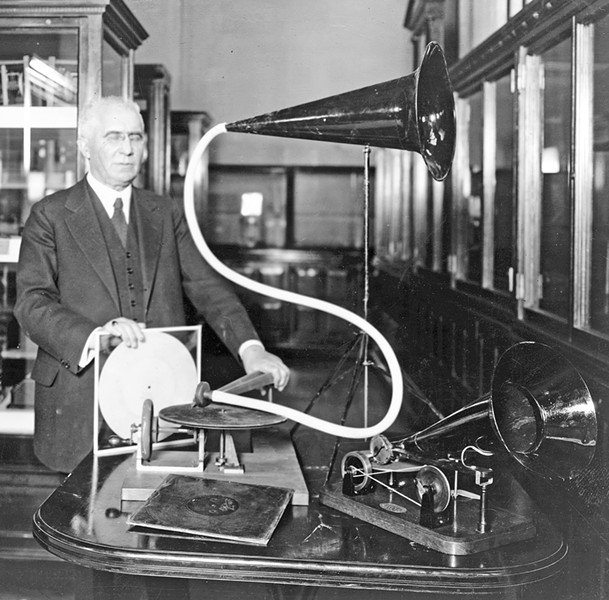 Fifty years after the world's first surviving photograph was taken by Nicéphore Niépce in 1827, Thomas Edison did for sound what the French experimenter had done for light: capture it. Edison made his first recording "Mary had a Little Lamb" in December of 1877 and — like Niépce's original photo — it was crude, imperfect, yet brimming with possibility.

The summer of 1877 saw Edison trying to build a machine that could transcribe the Morse code of telegraph messages into grooves on paraffin paper. By that fall, he realized that the same basic system might be able to record sound. He wrapped tinfoil around a cylinder which he rotated while a stylus scribed a groove into the foil; the louder the sound, the deeper the groove. The stylus was attached to a diaphragm that responded to sounds focused by a conical horn. Somewhat to his amazement, he was able to record his own voice and play it back by reversing the process. "I was never so taken aback in my life. I was always afraid of things that worked the first time," he told a reporter.

Edison envisioned that his machine might be useful for dictation in a business setting, not realizing that the future of sound recording would be music. Today, of course, we take for granted the ability to listen to a Beethoven string quartet or Beyoncé's latest at the touch of a button, but before the invention of sound recording, you might have heard a favorite symphony or concerto just three or four times in your lifetime. That's assuming you lived near a concert hall and could afford to attend a performance. Clearly, Edison's tinfoil (later, wax) cylinders weren't going to take music to the masses; they couldn't be reproduced, they were short and the quality was terrible. What was needed for commercial success was a way of capturing several minutes' worth of music with reasonable accuracy, then making unlimited copies of the original without losing quality.

German American inventor Emile Berliner rose to the challenge. While Edison went on to improve the telephone and develop a viable electric light bulb, Berliner devised the flat disc with grooves cut laterally (unlike Edison's vertically-cut cylinder) for sound reproduction, a format virtually unchanged for the next 60 years. Berliner's system required separate machines to record (left in photo) and play back (right), unlike Edison's original cylinder instrument that did both. Berliner's real breakthrough was figuring out how to create a sturdy master disc from which copies could be made. Starting in 1886, he invented a method by which a stylus, following the wiggles of a moving diaphragm, etched a spiral line upon a zinc disc coated with a thin layer of wax. After the wax was dissolved in acid, the inscribed line on bare metal became a playable groove. It was then a matter of "pressing," i.e. converting the original into a durable master disc (the groove mirrored as a raised line) from which faithful copies — records — could be made.

While Berliner's basic design was to last until Columbia Records introduced the vinyl hi-fi LP (long playing) record in 1948, the man himself turned his talents in other directions. After losing a series of lawsuits, including a patent battle with Edison, he found ways to improve cloth looms and acoustic tiles before embracing the young science of aircraft design. Specifically helicopters: Berliner introduced the use of the lightweight rotary engine (instead of a heavy in-line arrangement) and experimented with a vertically mounted tail rotor to counteract the main rotor's torque.

So next time you see an orange Coast Guard chopper out over the bay, note the tail rotor and give an nod to Emile Berliner. But know that his real claim to fame is that he pretty much invented the recording industry.

Barry Evans (barryevans9@yahoo.com) now knows why the "Grammy Awards" are called that.