The Sound of Bells 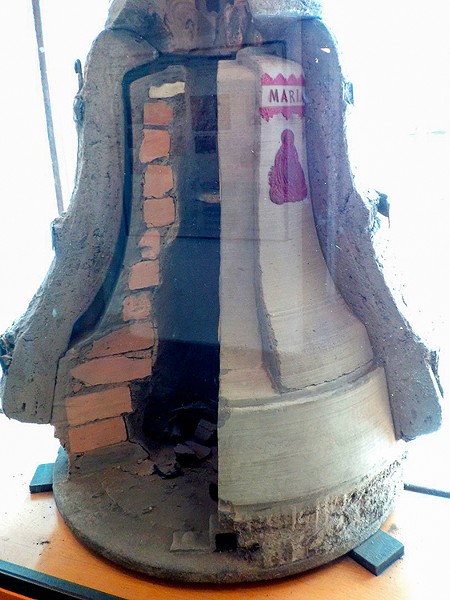 Photo by Barry Evans A cutaway model of a bell casting on display at the 418-year-old Grassmayr Glockengiesserei (bell foundry) in Innsbruck, Austria. The dark cavity between the brick-and-clay inner form and the outer clay casing is the mold for molten bronze.

"Never send to know for whom the bells tolls; it tolls for thee," cautioned poet John Donne 400 years ago. That was then. Weddings and funerals used to be prime bell-ringing events, when virtually every parish church in the western world had one or more bells hung in their tower or steeple. You won't hear them much these days, although if you walk past St. Bernard's on Sixth and H streets in Eureka, chances are you'll catch the pealing of the hours and half hours. St. Bernard's bell has been there since 1886, and — bronze being one of the most enduring of metal alloys — is likely to be there long after you and I have left the planet.

Musically, large bells are complex, sounding anywhere from 50 to 1,000 different frequencies. At funerals, we're likely to hear sadness in their harmony — that's the minor third — whereas at joyous events, our ears are more likely to respond to the melodic major tones. Same bell, different occasion. Curiously, we can't directly perceive the short-lived metallic strike tone of the clapper hitting the bell, although a tuning fork will resonate to that frequency. What we actually hear are the resulting long partial tones as mixtures of pitches, strengths and echoes. Critical factors for "a fine bell in which a long-lasting echo fades in balanced measure," according to a plaque at Grassmayr Bell Foundry in Innsbruck, Austria, include:

Composition. Typically 80 percent copper and 20 percent tin (sometimes with small amounts of nickel and lead) cast at around 2,150 degrees F. This high-tin bronze results in minimal internal damping, low-sound velocity and sufficient elasticity in its crystal lattice to absorb high-impact blows when rung.

Profile. The height, diameter, wall thickness and shape all determine a bell's harmonics. Once the responsibility of skilled founders, profile design has now been taken over by computers.

Fittings. The mounting, clapper and surrounding structure all influence a bell's resonance and intensity.

Bells and gongs have been around since about 2000 B.C. in China and Mesopotamia, coming into Christian liturgical use in the second century A.D. Tradition says that Irish and Scottish missionary monks took bells to central Europe during the sixth century, where they were embraced — especially after Emperor Charlemagne promoted their use in church services. In Europe during the Middle Ages and right up to the 18th century — that is, until the construction of good roads — teams of itinerant founders cast large bells right next to the church for which they were destined, thus eliminating the challenge of transportation. Taking this to extremes, in 1762, workers cast the 3.5-ton Great Dunstan for Canterbury Cathedral of southeast England in a pit in the cathedral yard and then built a tower right over it so they could haul the bell directly up into the newly constructed belfry.

Even damaged bells can become famous. The largest bell in the world, Moscow's 220-ton Tsar Bell, has never rung, having been irreparably damaged as it was cooling down after being cast in 1737 (the sad story involves a fire and cold water). And Philadelphia's Liberty Bell, cast by London's Whitechapel Bell Foundry in 1752, cracked in the 1840s and since then has only been tapped, not rung. Whitechapel Bell Foundry also made London's iconic Big Ben, the deep "hour" bell heard on the BBC World Service. In a sign of the times, the foundry closed down last May after being in business for 450 years.