The Sound of Magic's Misdirection 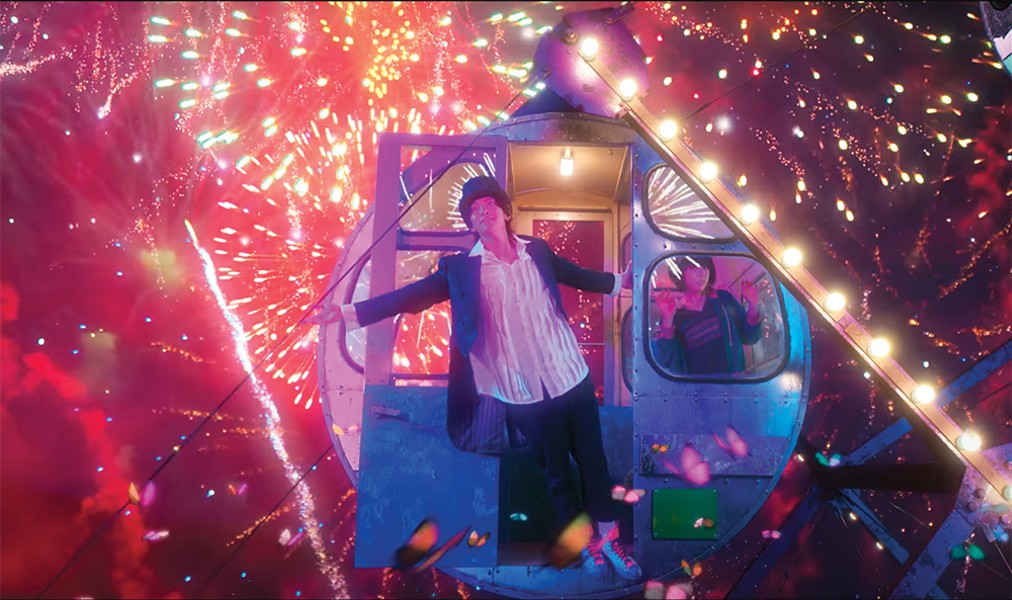 The Sound of Magic Exactly how concerned I am with non-violent protestors violating Kavanaugh's right to privacy.

THE SOUND OF MAGIC. I believe in magic. I live in a world where people spontaneously sing and dance, and cherry blossom petals fall from trees in the most opportune times. Because of this outrageous fortune, the world of The Sound of Magic, the new K-Drama series streaming on Netflix is immediately enticing. A downtrodden student (Choi Sung-Eun) with far too many secrets weighing her down and the son of a successful lawyer (Hwang In-Yeop) facing all the pressures of success, are serenaded in spectacular style by an enigmatic and devilish magician (Ji Chang-Wook) living in an abandoned amusement park. The series' recipe of musical, drama, rom-com and suspense may seem like the writers thumb wrestled for control of the direction of the piece, however, the flow, character development and plot twists make it work.

In true K-Drama style, the show plays like an extended mini-series telling a completed story. Episodes feel nearly complete themselves with a few cliff-hangers as frustrating binge bait. It is healthier to digest it slowly and respite between episodes aids in the success of the aforementioned menu of styles. In fact, the ebb and flow of each segment's tones could be hampered by gluttonous binge viewing. For example, the show's exposition of A-yi's destitution and drive to take care of herself and her sister Yoo-Yi (very sweetly played by Hong Jung-min) transitions nicely into the suspense of meeting the mysterious magician Ri-Eul. Yet, when juxtaposed with the almost Disney-level magic and song of later episodes, the shift feels jarring. The gritty reality of A-Yi is necessary to establish and is just as engaging to watch as the fanciful cinemagic created by the magician plotline and both are explored in different episodes. This allows for deeper exploration of the series' unifying theme: When does fancy and wonder impede grounded success in this capitalist world?

Within the high school that A-yi attends, this question is embodied in Na Il-Deung's journey. Pushed to be a lawyer by his parents (Yoo Jae-Myung and Kim Hye-Eun) he scrabbles to be the top student in every subject by sometimes nefarious means. While his mother metaphorically snaps the whip in an archetypal portrayal of overbearing matriarch drive, his father's affection is refreshing until his son's disrespect of his mother leads to a quick shut down. Propelled by his repressed feelings for A-yi, Na Il-Deung's escape into the free world the magician provides leads him to question paths that are taboo for proper Korean men to explore. Why do we need respect, power and money if we are doing something we love? Blasphemy!

The series also includes next-level mean girl bullying. Ji Hye-Won plays the part of Baek Ha-Na well — cunning and devious, her only motivation is destruction of the awkward A-Yi. Specifically, it's "to have a little fun" as she tells Kim So-hee (Kim Bo-yoon) the typical hesitant sidekick, uneasy yet tacitly approving of her popular friend's antics. Incorporating a vlog, cyber stalking, manipulative traps and false affection, Baek Ha-Na is the main villain of the story. Perhaps it's clever camera angles or the actor's facial exercises paying off, but the physicality of her characters expressions may lead one to question whether she's the same person throughout. It is particularly disturbing when she plays care and concern while wearing an innocent face until her duplicity reveals a sinister, under-lit-horror-movie antagonist.

Director Kim Seong-Yoon's use of every second of an episode's 62-minute runtime to tell a complete and in-depth story is a testament to his ability to honor writer Kim Min-Jeong's adaptation of Korean digi-comic Annarasumanara. Though a lesser director might hesitate at the ambitious merging of styles, Seong-Yoon tackles the challenge brilliantly. The series may seem bloated at times, but the way he breaks up the story and refocuses the episodes allows for more thematic meaning and deeper character revelations.

Music director Park Seong-Il blends the catchiness and energy of K-Pop with the lavish dramatic flair of musical theater. Though it's a bit sweet for my taste (think Disney princess singing bubblegum pop), the smattering of numbers feels appropriately spaced and just barely prevents nausea or eye-rolling.

A musical love story murder mystery drama and a rabbit in the hat. Don't let the deeply misleading trailer fool you; this isn't a kid's story or a rom-com, and some episodes should come with a trigger warning for the more abusive and graphically violent segments. However, once the disappointment of a bait-and-switch trailer wears off, the misdirection may fit the theme. If you take your time with it, the beauty of the bow-ending is worth it.

AROUND THE WORLD IN 80 DAYS. Animated animal adventure based on the Jules Vernes tale, voiced by Aida Rodriguez, Madi Monroe and Raphael Alejandro. PG. 82M. FORTUNA,

EVERYTHING EVERYWHERE ALL AT ONCE. Reality unravels and multiverse Michelle Yeoh comes to the rescue. With Ke Huy Quan, Jamie Lee Curtis and the legendary James Hong. R. 146M. MILL CREEK, MINOR.

FANTASTIC BEASTS: THE SECRETS OF DUMBLEDORE. Hey, it can't be worse than her Tweets. PG13. 143M. BROADWAY.

THE LOST CITY. Sandra Bullock and Channing Tatum star as a romance novelist and her cover model thrown into a jungle adventure. With Daniel Radcliffe. PG13. 112M. BROADWAY.

THE UNBEARABLE WEIGHT OF MASSIVE TALENT. Nicholas Cage as Nicholas Cage and Pedro Pascal as a drug lord who hires him for a birthday party that turns into a CIA operation. R. 107M. MINOR.