The Spirit of Aloha 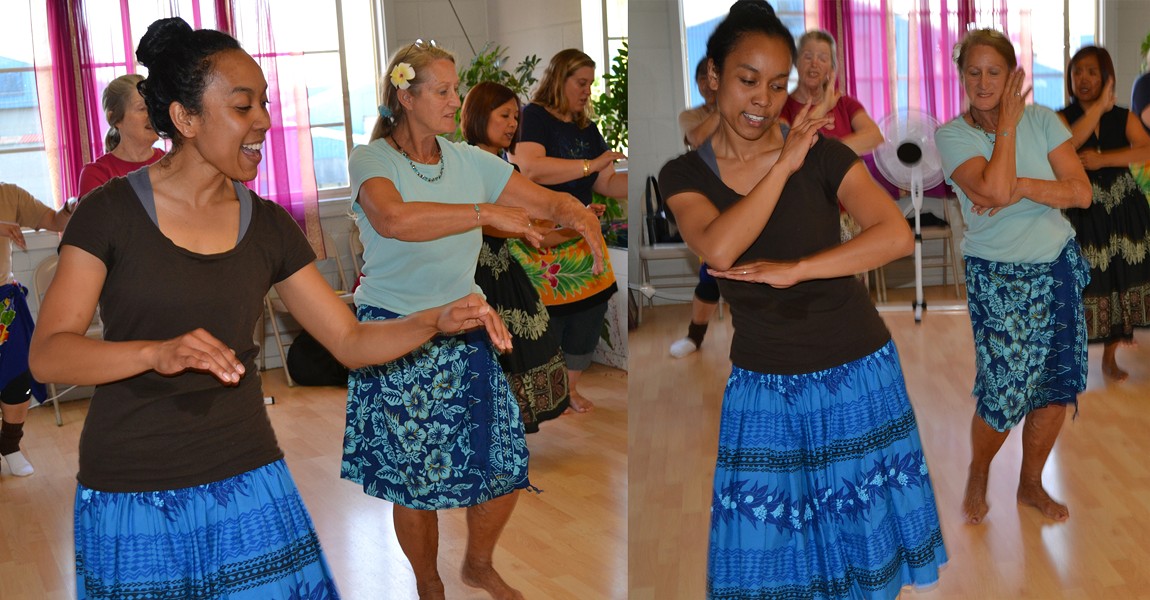 "The culture of aloha means many different things. The aloha spirit is bigger and broader than love, than hello or goodbye," says hula instructor Tatiana Kealoha Robinson, who grew up learning hula from her mother in their halau, or hula school on Oahu. More like a family than a school, a halau is a defining element of a hula dancer's life.

"Once you start with a group, you identify with that group, you become a diehard member of that group. ... In Hawaii your hula sisters and your hula brothers are your family," says Robinson. Members of her actual family in Makakilo, near her home in Ewa Beach, make up the halau called Ho'ohui'kaiku'ana. "When I was growing up we did it (hula) with our family. There was a togetherness."

In the modern age, it seems a far off dream to be born into a dance-centric culture. In a tribe, a village or an extended family (think a Greek or Italian wedding, a Phish show, a barn dance), it's easy to understand why people are dancing together. They belong to a community. Dancing together affirms their connection.

Reasons to dance together become harder to define in the world of Western concert dance. Maybe we've studied classical ballet since kindergarten, or we're modern dancers in New York, so there's a commonality. But what are we trying to say? In the art dance world of intense competition, it's often hard to understand the reasons to dance beyond the relentless physical drive. What was the dance of my people? Where were my tribe and what was our dance?

Hula is this incredible mix of ancient hula kahiko (pre-1898) accompanied by oli (chanting) and the modern hula auanna danced to mele (songs), usually with English lyrics. Both styles spring from traditional, tribal or familial reasons to dance. The Hula kahiko has been passed down for generations; hula auanna leaves more room for creativity for the choreographer and the dancer. Both forms tell a story: the kahiko, the unwritten history of Hawaii; the auanna, an interpretation of popular song. The auanna still come from classical Hawaiian movements, with new dances made to the music and lyrics of the mele. Although hula auanna emerged with the influence of Western music and instruments, the expressive nature of its movements remains true to its ancient roots.

There is no separation of the movements from the meaning of the chanting or the singing and music. But there isn't a gesture for each word -- it isn't sign language. "You're telling a story with the music -- a love story, you express it -- a sad story, you express a sadness. There are different ways of expressing yourself with the music," explains Robinson. "The halau each have different lineages" that make them identifiable in style and in their dances, giving a hula dancer a foothold from the past into the present. Whether traditional or modern, it's her (or his) culture, history, halau and reason to dance.

Of Filipino and African-American descent, Robinson is the third generation of her family native to Hawaii, but she's not ethnically a native Hawaiian. Born into the island culture, she moves with lithe, earthbound hips and feet, graceful, clearly placed arms, and articulate hands, a mane full of thick dark hair falling past her shoulders. She loves hula. "I studied many years before becoming a teacher," she says. Class begins with Robinson playing a traditional percussion instrument, the ipu heke, as students warm up. The steps and turns she teaches have Hawaiian names the same way you'd hear the French plié or relevé during a ballet barre.

Robinson's mother, Tina Leialoha, who lives here now, sits in the back of the studio counting aloud, helping dancers keep the steps on rhythm and in sequence. The difficulty lies in small changes in the hips, how you sway, how you move your skirt and place your weight on your feet. The differences in rhythms can be nearly imperceptible like a shift in a breeze or ripples on the water. Dancing hula for the first time feels both natural and challenging.

Although Robinson's classes are not a halau, they mark the beginning of a movement community. "I am teaching here because people want it," she says. A spirit of generosity permeates the atmosphere. The steps are not as easy as they look, and other women in the class are supportive. Their moves are lovely: the lush sway of the hips, the nuances of weight shifts below hand gestures and angles of the torso, the simple beauty of a palm cupped against a cheek, the arms making waves, the fingers making stars -- an undeniable pulse connects the clutch of women.

In the dance studio aloha means welcome. Dance with us. Be our hula friend.