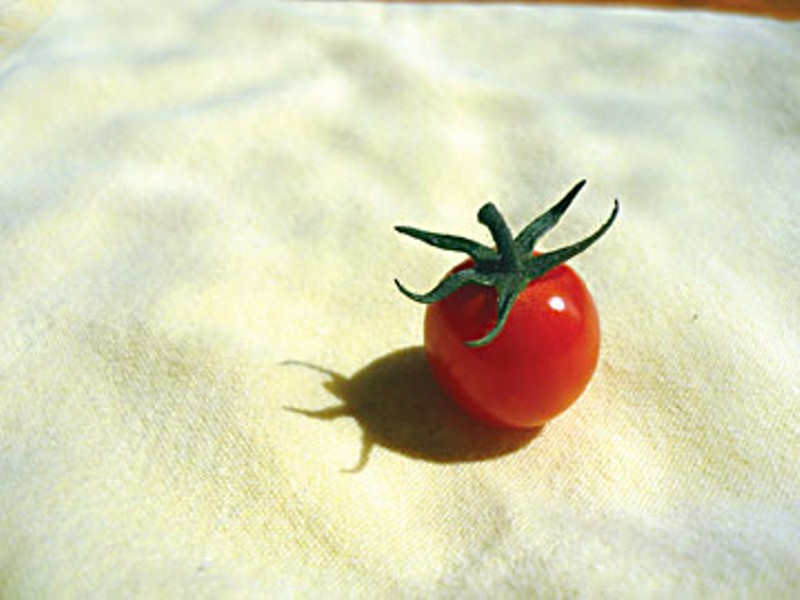 As the Summer That Never Quite Was draws to a close, I submit to you my final report on the state of my straw bale garden. Thanks to all of you who keep inquiring about it -- actually, I'm surprised that the idea has sparked so much interest. In the last few weeks several people have e-mailed me to say that they might like to try something like this next year. It is a very simple and ecologically friendly idea, and it solves a lot of the peculiar problems that Humboldt gardeners face. So here's what I've learned:

Location, Location, Location. The real advantage of the straw bale garden is that you can put it in the best possible spot in your yard. For me, that spot was a wooden fence that gets blasted (well, blasted is too strong a word. Exposed to?) south-facing sun all day. The fence also serves as a windbreak.

I did not, however, choose a spot that would make it easy to harvest vegetables. Between the fence behind the straw bales and the chicken run on one side, it was not always easy to get access to this little vegetable plot. Usually I would step right into the middle of the bales, which is a risky move that compacts the root systems. So think about access when you're picking a location for your garden.

Bad Soil? Weeds? No Problem. The beauty of the straw bale garden is that you do no digging at all. You just set the bales on the ground, top with a layer of compost, water, fertilize and plant. I did my best to clear the area of leaves and level the ground before I situated the bales, but that only took a few minutes. And it worked. With the exception of a little bindweed that found its way into the bales, I've had no weeds at all.

Resist the temptation to put down a layer of plastic or landscape fabric under your straw bales. What makes this system work is that the bales become an extension of the soil. Some roots will work their way through the bales into the ground, and beneficial earthworms and soil microbes may migrate from the ground to the bales. So don't disrupt that ecosystem by putting down plastic barrier. If you're very concerned about weeds, you could put down several layers of cardboard or newspaper and set the bales on top, which would smother weeds and gradually decompose. But really, the bales should be weed-proof all by themselves.

Pests? I had pests, all right. My biggest mistake was in failing to realize that gophers, who had never invaded my garden before, were just lurking in the alley waiting for me to plant this garden. They tunneled their way through the little spaces between the bales and wrecked the place. So next year, I will be putting down one layer, or possibly two layers, of chicken wire to keep the critters out.

Oh, and speaking of chickens. I wrapped a little decorative wire fence around the straw bales, figuring that it would be high enough to discourage the chickens from flying over. How wrong I was. You may not have a flock of free range birds in your backyard hell-bent on eating your lettuce, but if you do, you're going to need to fence it off. And the higher the fence, the harder it is to get access to your little garden so you can harvest the veggies yourself. Good luck with that. I'm still figuring it out myself.

On the bright side? Very few snails or other critters. And no signs of soil-borne disease, since the plants are mostly growing in bales, not in the ground.

Irrigation: Easy and Important. I used a soaker house, but you could also use drip irrigation. I just turned it on for a few minutes most mornings. The straw bales started out pretty dry, so make this easy on yourself with some kind of simple irrigation system.

Compost, Organic Fertilizer, and More Compost. I topped my bales with about three inches of compost and aged chicken manure. Because I was using four bales to form a square, leaving a hole in the middle, I also had to fill that hole with compost. For that I mostly used store-bought potting soil, because it's what I happened to have around. This turned out to be a great place to plant potatoes and other root crops that need loose soil to grow in, although you'll have to ask the gophers whether they liked the potatoes -- I didn't get any.

It's also important to use a good liquid organic fertilizer, especially in the first couple of weeks, when you are going to need to drench the bales daily to build up nutrients and start a slow composting process. I used a variety of liquid fertilizers, fish emulsion, kelp meal and compost tea. I also sprinkled a layer of all-purpose dried organic fertilizer on the bales before I topped them with compost.

I didn't fertilize much after the first month, but it wouldn't hurt to add more fertilizer once a month or so. This is one case where I would definitely avoid synthetic fertilizers like Miracle-Gro: it would be very easy to accidentally overfeed and burn the plants. Because the roots are more or less confined to the bales, even one accident like this could be the end of your garden.

And Now, the Harvest. So after all that, what do you get? Believe it or not, in spite of the gophers and the chickens, I made it through the summer with two or three massive and very healthy tomato plants. I didn't stake them -- I just tied strings along the back fence and let them climb up the strings -- and just last week I harvested my first cherry tomato.

So that's my harvest for the season. One tomato.

Go ahead and laugh. Have your fun at my expense. But there are more tomatoes on the way, as long as the weather holds.

If you add up the money I spent on this little experiment -- four bales at seven bucks a bale, maybe $20 worth of fertilizer, plus a bag or two of potting soil and all the plants that the gophers ate -- those cherry tomatoes had better be good. But I've learned my lessons, and I'm going to try again next year.

Meanwhile, the bales have shrunk down to about half their original size and are as soft and spongy as -- well, sponges -- meaning that they are well on their way to becoming compost. I'll let them continue to melt down this winter, and next spring I'll spread the compost around the garden and start with fresh bales.

That's my plan, anyway. If you decide to give it a go, write to me and let me know how works out.