(And so should you) 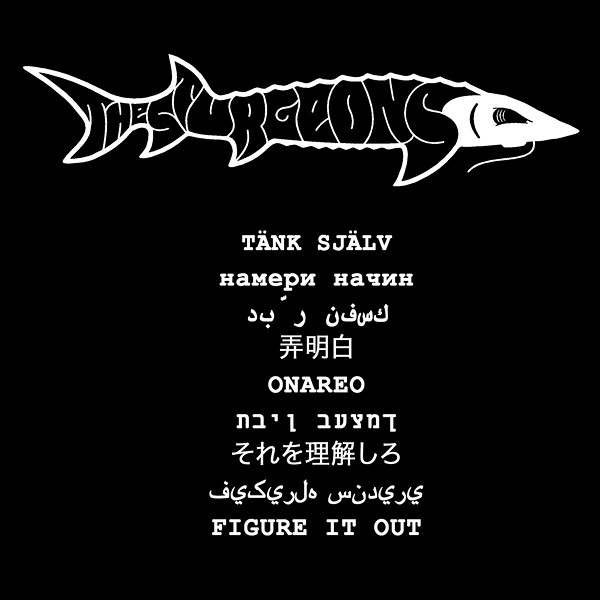 The Sturgeons' Figure it Out

Like a lot of you out there, last week came at me pretty hard and fast. As a member of the "gig economy," which is shorthand for the reduced circumstances that almost everyone under 40 has to live in so that three men can own more wealth than more than 150 million Americans, I am still reeling from the unprecedented closure of a vast portion of the U.S. economy and what that means to my own future. For anyone who still thinks that a music writer shouldn't mention politics, I have this to say: Everything happening right now, from very necessary venue closures and show cancellations to an unprecedented number of touring artists and club owners doubting the financial solvency of their futures is a result of politics. So if you don't like thinking about the shared reality affecting and endangering the health of the people who make the music you enjoy possible, may I offer you a conciliatory middle finger to enjoy at your own leisure. You're welcome.

However, like most of us out there in these uncharted times, I am doing the best I can to navigate this age of plague phlegmatically and with as much grace as I can muster. And wouldn't you know it? The window does sometimes open when the door is locked, even if it's only to air out the room from pollutants and the vectors of that grand illness called boredom. I've been slacking in my own work lately and now's the time to play catch up. My favorite local thrash metal/surf band released a near perfect album at the end of 2019 and I haven't even bothered to review it. I've been listening to the dang thing in my truck for months now and I've even done sound for the band once at a live show. So I'm here for some glorious and shambolic reckoning because dammit, The Sturgeons put out a total banger called Figure It Out and everyone should know about it.

I sat down with the trio at Richards' Goat the last night before the place closed down out of concern for the public, and attempted to hammer out an interview in the midst of the noise of the jolly little crowd and the jukebox. The results were mixed but I have the transcript and that glorious and thrashed-out album that really does sound too good to be true for any fan of old school punk and metal crossover music with so many hints of mixed-genre mutant perfection.

First off you should know that the band was started by bassist/singer/riff-meister/lyricist Red Reaper and drummer Andrew Zverina as a garage punk band in the style of The Mummies, but things didn't get off the ground with the initial line-up. And as far as the name goes, Red tells me that it was originally conceived "as a band who dressed up in medical scrubs but were called the Sturgeons, or if we were dressed as fish and called The Surgeons, I'm not sure." Zverina tells me that the former is the more likely story. The original line-up didn't meet the needs of the rhythm section, who tell me that their favorite bands growing up were Van Halen (Zverina) and Primus (Reaper). That's where friend and guitarist Matthew Schweikert-Stary came in.

"I'm the thrash metal guy, Andrew is the old school punk and classic rock dude, and Red is the funk weirdo," says Schweikert-Stary. The album bears this out. Recorded in Zverina's garage, the nine-track opus is an exercise in heavy thrash majesty and classic rock opulence with an unimpeachable street punk beat underneath it all. Reaper says "Call Death" is his favorite track, with its humanistic bleating lyrics evoking an existential reckoning brought on by his days as a funeral director. "Recognize your impermanence," he screams over a drop-bass riff. "Call death. Before death calls you."

The album's centerpiece is the title song, which Schweikert-Stary says is his favorite to play live because, "There are a lot of fun riffs and lots of changes. The song develops itself through various landscapes, there are so many cool changes. The outro is stoner metal and we really stretch out there." He's right, of course. I've listened to the track many times buzzing around in my truck and I can say that this one's a proper banger. There are two guitar solos — the aforementioned outro and a mid-song solo — that hit near tonal perfection. Sweeps and staccato plectrum statements give way to feedback swells in a way that would give the masters pause. According to Schweikert-Stary, one such master was on tap during the recording, which was done entirely in drummer Zverina's garage with only vocals and solos overdubbed. "Dimebag Darrell (from thrash metal band Pantera) is a huge influence on me," says Schweikert-Stary. "When I recorded the solo for 'Figure It Out,' it was St. Patrick's Day, 2019, and the band was feeding me Black-toothed Grins," a shot invented by the late Pantera guitarist: equal parts Crown Royal, Seagram's Seven and Coca-Cola. "I kept drinking and playing and it happened." What happened is a masterclass in tonal majesty and usual dynamic splendor.

The boys hope to record a second album soon and conquer the West Coast after the forced hiatus of the outbreak. I believe they can and should pursue these ends, as their sound is simply too great to hide behind the Redwood Curtain forever. The sound is pure and the noise is righteous. In the meantime, if you have any interest in the band, the songs can be found on Apple Music, iTunes and Bandcamp, and locally at The Works, Peoples Records and AMP'T SkateShop. There is also a website, www.thesturgeonssuck.com. Come and get it.

The Journal's Music and More grid and Calendar are taking a pandemic break. They'll be back when it's safe to thrash, grind and sway in the club as a community. When that day comes, send your gig info, preferably with a high-res photo or two, to music@northcoastjournal.com. Collin Yeo is a lover of thrash music and a hater of capitalism. He prefers he/him pronouns and lives in Arcata.

The Setlist The Sturgeons Figure it Out Album reviews