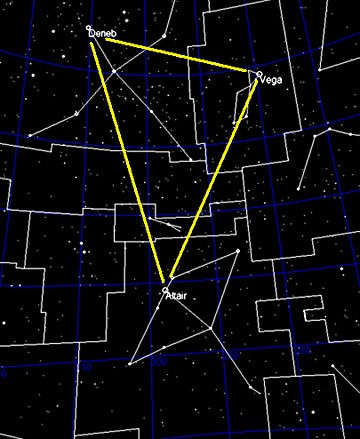 The Autumnal Equinox is a few weeks behind us, the nights are getting longer and cooler, and it is a good time to go outside and see some interesting things in the sky. If you go outside around 9 p.m. in the next few weeks and look directly overhead, you will see one of the most spectacular stars visible to the naked eye. Deneb is the brightest star in the constellation of Cygnus, the Swan. Do you see two other bright stars nearby? Vega is to the south-west of Deneb, while Altair is to the south. Deneb, Vega and Altair make up a grouping of stars known as the Summer Triangle.

Altair is the closest of the three to the Earth. It is only 16.6 light years away, and is about 3.6 times larger in diameter than our sun.

Vega is next, at about 28 light years, and is a very energetic star. If you lived on one of its planets that was as far from it as we are from our sun, you would not do much sunbathing, as Vega puts out far more ultra-violet radiation than we are used to. You would suffer a lethal dose in a few seconds.

Deneb is the true champion of the three. Estimates of its distance range from 1,200 to 2,500 light years. Despite being so far away, it is almost as bright as Vega and Altair. Can you think of what this means for its power output? Yes, it is putting out energy at a prodigious rate, about 160,000 times that of our sun. If it were as close to us as Vega, it would be bright enough to cast a shadow at night and would be easily visible in the daytime.

How would you describe the colors of these stars? To me, Altair looks white, Vega is blue-white and Deneb has a slight orange tint. What do you see?