Without an incumbent in the race, two vie for board seat 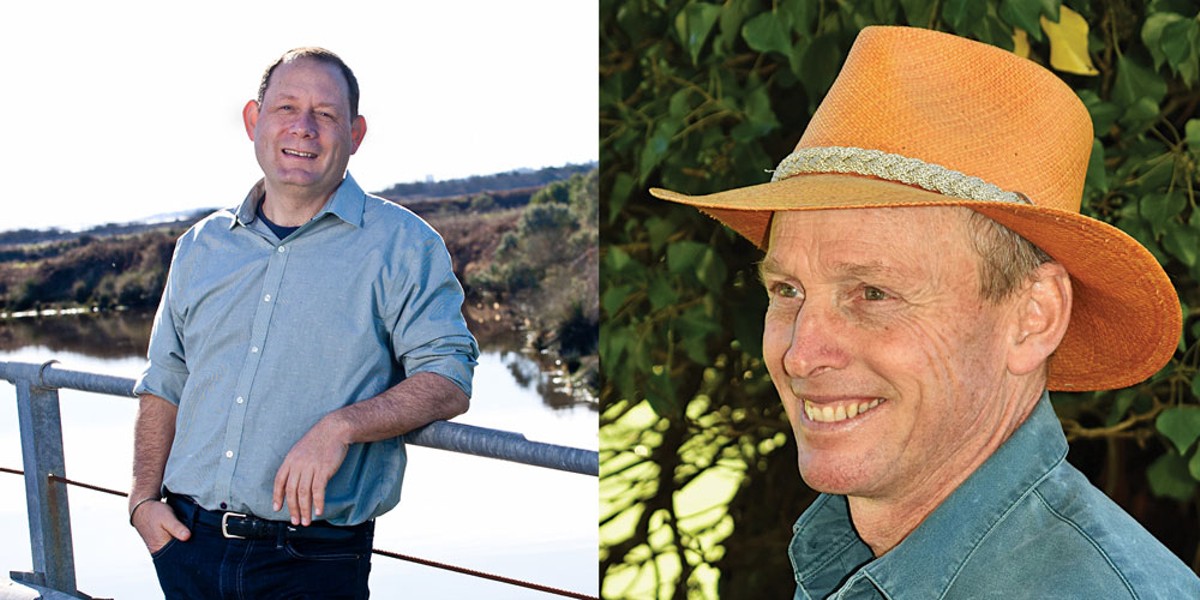 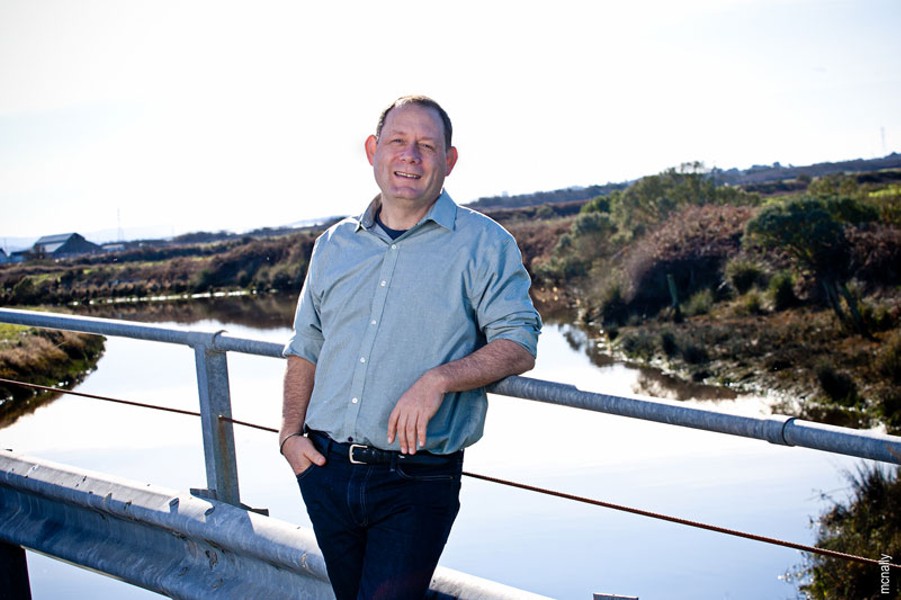 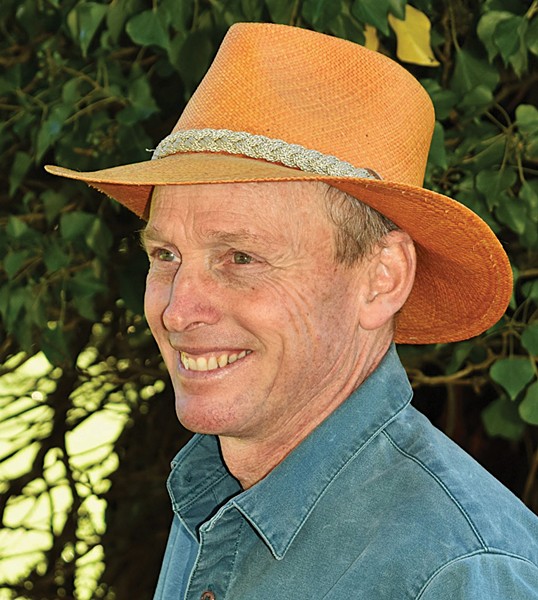 Humboldt County's 3rd District covers a portion of the county north and east of Humboldt Bay and includes the cities of Arcata and Blue Lake, as well as the unincorporated communities of Freshwater, Kneeland and Manila. With sitting 3rd District Supervisor Mark Lovelace's decision not to seek re-election, two contenders have thrown their hats in the ring.

Mike Wilson, 47, has lived in Humboldt County nearly all of his life, save for a few years spent attending college and working in the Bay Area.

Wilson, who lives in Arcata, has been elected to the Humboldt Bay Harbor, Recreation and Conservation District commission three times and has co-owned an engineering consulting firm since 1995.

He said he's running for supervisor because he loves Humboldt County. "This is where I grew up, graduated from HSU, and where my wife and I have decided we want to make our lives and raise our kids," he said. "We have a very special place here and I care about our future."

Working on the Harbor District has taught him he's motivated by public service and "bringing my problem-solving skills to work for solutions," he said.

Wilson said planning an economic and environmental future is one of the greatest issues facing the county. "After the Board of Supervisors finishes the county General Plan we will need to implement policies for jobs creation, housing, transportation, the environment, our quality of life and response to climate change.

The "rapidly changing" cannabis industry is another issue the county needs to address, Wilson said. "We must reduce the environmental and community impacts and encourage transitioning into a regulated and taxed framework that creates a positive outcome for all of us."

Finally, he said homelessness needs to be addressed. "I'm a 'Housing First' advocate. Ultimately, safe housing is needed to stabilize people's situations so that other issues can be addressed."

When it comes to issues specific to the 3rd District, Wilson said economic diversity is key. "Arcata is a leader and we can do more across the 3rd District for pre-permitting and infrastructure to promote new and existing businesses."

Roads and public safety need to be addressed in the less urban parts of the district, including Blue Lake, Bayside, Indianola, Manila, Freshwater and Kneeland, he said. "Being available and responsive to these residents' needs is a big part of the job."

Another issue he hears constituents bring up is a regional trail system. "We need to catch up to other places in the nation that already provide this important infrastructure," he said.

Uri Driscoll has been a professional farrier for 29 of the 33 years he's lived in Humboldt County.

The 55-year old Arcatan has also raised and trained horses and used them in therapy sessions, in addition to having planted a vineyard, worked on ranches and in restaurants, among other things.

He said he chose to run for 3rd District supervisor because "it is important to have good choices when choosing our leaders. It is also vital that we have healthy discussion as to the direction of our community. Instilling those choices and discussion into election cycles allows us, as a community, to refocus our intentions."

Driscoll said economic development is the most important issue facing Humboldt County. "Without a strong, sound economy we become weak politically and vulnerable to the whims of outside forces," he said.

Homelessness, affordable housing and drug use are also costing "obscene amounts of money and the lives of our children and fellow citizens," he said.

Additionally, he said, the county needs to "address how to retain law enforcement personnel and reduce excessive overtime costs. Enabling officers down time with their families is a must."

Finally, he said, communication has been an issue with county government. "When communication breaks down between agencies and the public we, at times, create massive problems that can be very expensive to fix."

Specific to the 3rd District, Driscoll said the Arcata waste water treatment facility "may end up being very problematic and expensive to bring into compliance."

He'd also like to see industrial and commercial zones filled with businesses that will provide "much-needed jobs" and revenue to maintain infrastructure and build amenities.

And maintaining productive agricultural lands in the 3rd District is crucial, he said: "We need to support ranchers and farmers as they work hard to provide healthy food and open space for us and vital habitat for wildlife."

I'm not really a "favorites" person. I do love a good post-apocalyptic sci-fi flick, but not the popular teenage combat ones. I also really like a good soundtrack; Harold and Maude, Repo Man and a few Tarantino movies come to mind.

Probably National Geographic. I love political and science magazines in general, when I have time. Is North Coast Journal a "magazine"? I read that every week.

"Waiting for the Great Leap Forward" by Billy Bragg. Like my taste in music, its content is dated, sarcastic and self-deprecating.

My 96-year-old grandmother. Her stories about family, education and work are special to me. But it's the experiences she shares about her work with her husband as a union organizer in the Midwest and Detroit from the 1930s through the 1980s that I really love to hear about. She not only organized for better conditions of workers, but also did the hard work within the unions to democratize, desegregate and provide equal pay for women.

Amy Poehler on Parks and Recreation — Leslie Knope's short time on the city council says it all.

That really depends on the particular animal. Two cats are a part of our family right now. Sometimes I believe one of them, Oliver, thinks he's a dog.

I asked my long time friend Bobo. I believe he is Humboldt County's most famous Bigfoot expert. He says if Bigfoot could register he would be a Green Party member, but with a Libertarian bent.

My favorite swimming holes are in Southern Humboldt. One of the reasons they are great is because no one is there. If I told you where they are, my friends would kill me. I can tell you that Horse Linto Falls on the Trinity (aka Devil's Elbow) on a weekday is a go-to spot for our family.

I have two: playing guitar and fishing. Playing in a band again is something I would love to have more time to do.

I wish I had the ability to remember the lyrics and chords to all the songs I've ever heard. This would be really useful at campfires.

UnBranded, a documentary about four young men taking a herd of mustang horses through the wilderness from Mexico to Canada.

If you don't tell anyone I'll admit it is the North Coast Journal.

"Born to Run" by Bruce Springsteen.

Dr. Elizabeth McCord played by Tea Leoni in Madam Secretary. I love how she brings some horse sense to the White House.

Dogs, cats, horses, chickens, deer, ravens, tree and barn swallows; all are on the Driscoll dole. Of course, my wife and I are getting a heck of a deal from the entertainment perspective.

I don't swim much, mainly because I sink so easily.

Mounted archery. I like it most because I need to improve so much.

They have their own party and only invite Libertarians.

To be invisible. I would use it to party with the Sasquatches again. Since I registered as a Democrat in 1984 they don't invite me anymore.