The Tuluwat Island Massacre in its Time 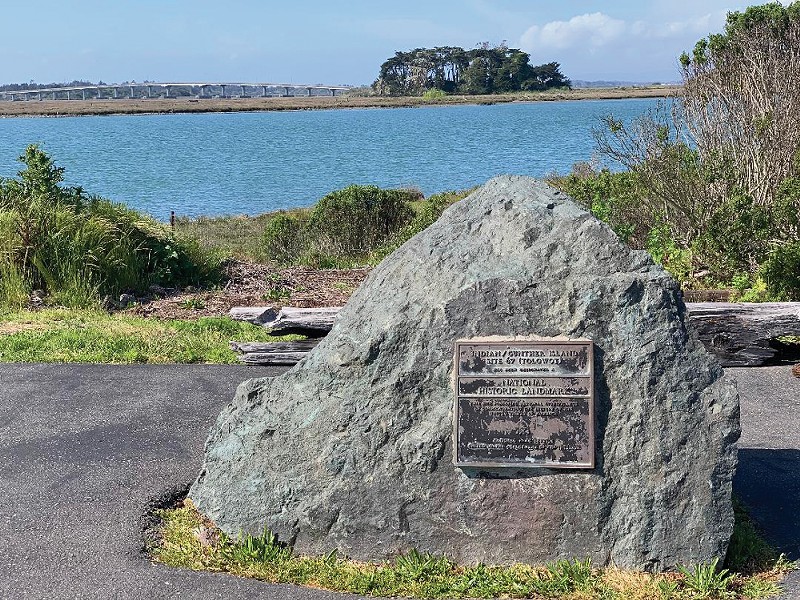 Photo by Barry Evans This National Historic Landmark plaque on Woodley Island, with Tuluwat Island (formerly Indian Island) in the background, merely refers to "Indian/Gunther Island, Site 67." No mention is made of the 1860 massacre.

Archeologists have determined that Wiyot people occupied Indian Island for at least 1,000 years — possibly much longer — including the village of Tuluwat, one of the several locations where the tribe held annual World Renewal ceremonies. During one of these ceremonies, the night of Feb. 26, 1860, Tuluwat was one of about a dozen Wiyot sites attacked simultaneously in coordinated raids. Several hundred Native people (it's hard to obtain an accurate count), mostly women and children, were killed while the men were away replenishing their food supplies. They were massacred by white settlers who had settled in the area since 1850 as part of the California Gold Rush. There were few survivors. Contemporary accounts in local media, and by the man who bought the island, show wildly different views ranging from incitement to horror.

A day before the massacre, an editorial in the Humboldt Times dated Feb. 25, 1860, now reads at minimum as harsh racism, or as a call to violence:

"The settlers must be protected and the Indians and not the white must yield ground ... keep this company [of Dragoons, stationed at Fort Humboldt] in the field until the redskins are driven from our county."

Before Bret Harte became a famous short story writer, focusing particularly on the Alaskan gold rush, his many occupations included that of the assistant editor of the Northern Californian, published in Arcata. Three days after the massacre on Feb. 29, 1860, Harte published his graphic eyewitness account of the aftermath. Newspapers in San Francisco and New York picked up the story, in which he wrote:

"[A] more shocking and revolting spectacle was never exhibited to the eyes of a Christian and civilized people. Old women, wrinkled and decrepit, lay weltering in blood, their brains dashed out and dabbled with their long gray hair. Infants scarce a span long, with their faces cloven with hatchets and their bodies ghastly with wounds."

When the Humboldt Times finally got around to reporting the story on March 3, 1860, nearly a week after the massacre, it did so in neutral terms, with no hint of regret for its militant editorial:

"The rancheria on Indian Island was attacked on Saturday night by an unknown party of men ... news reached town that the ranges on South Beach [South Spit] had also been attacked ... a considerable number of Indians on Eel River were killed at the same time .... The whole number killed at the different places on Saturday night, cannot fall far below a hundred and fifty, including bucks, squaws and children."

Within a month, the genocidal editorial slant of the Humboldt Times was in full view, as seen in this cold-blooded opinion piece, published March 17, 1860:

"For the past four years we have advocated two — and only two — alternatives for ridding our county of Indians; either remove them to some reservation or kill them."

Robert Gunther emigrated from Germany to the U.S. in 1852 and arrived in Eureka, at 27, in 1858. He bought the island just before that terrible night of Feb. 26, 1860. Wouldn't he have known about, and perhaps encouraged, the massacre? In fact, I've seen nothing linking his name to those of the perpetrators and, in a talk many years later, he gave his version of the events:

"Early in 1860, I learned that Indian Island was for sale. I bought [Captain Moore's] 80 acres on Washington's birthday, and three days later, the Indian massacre occurred.... Every year, they had a festival which lasted a week. The festival was in full blast when I bought the island ... I occupied a room then ... at the foot of K Street. Sunday morning, I was awakened by a noise ... everything was still for an instant, and then I heard two heavy blows or shots, in the direction of Indian Island and then all was still again.... It was never publicly known who did the killing, yet secretly, the parties were pointed out. Nor was their number definitely known, some claimed there were six while others claimed seven ... we planned to bring the parties to justice. Capt. Moore was the Justice of the Peace. We soon found that we had better keep our mouths shut."

On Oct. 21, 2019, the city of Eureka deeded all its remaining land on the 280-acre island to the Wiyot people, having already deeded 40 acres in 2004, becoming the first local municipality in the U.S. to take such a step.

Marnie Atkins, Da gou rou louwi' Cultural Center Manager for the Wiyot Tribe says the significance goes beyond the tragic history: "Often people think that Tuluwat is important or sacred to us because of the massacre that happened there [in 1860]. However, before that, the island was sacred because it is our creation place. I try to let folks know this because I think it is important that they understand the deep connection we have with the island and Wigi [Humboldt Bay] with the hope they can relate to the sacredness of the island to Wiyot people."

For more details from a historian's perspective, refer to Jerry Rohde's "Genocide and Extortion" (Feb. 25, 2010).