The Uncensored Bible: The Bawdy and Naughty Bits of the Good Book 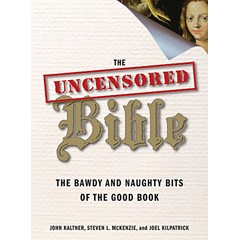 The narrative set forth in that copy of the Old Testament you pull off the shelf at Borders is the same one that's been told ever since the ink dried on the Dead Sea Scrolls: God made Adam in His likeness; early humanity rebelled against God's commands; God flooded the Earth, and so on.  Anyone nowadays hoping to learn anything truly new in its pages, in the same way they would reading the new Stephen King novel, is destined for failure.

Such has always been my mindset; that is, until I discovered the engrossing and astounding contentions made in The Uncensored Bible. Uncensored naughtily recasts 23 passages of the Good Book, making the convincing case that the lust-doomed city of Sodom was your average, cookie-cutter suburb amid what was a very, ahem, "fertile" crescent.

This should liven up church: Uncensored controversially debunks the notion that Eve came from Adam's-rib; recasts Abraham as a wife-pimping voyeurist; and argues that Jacob was an early RuPaul. If those gems don't have you ditching US Weekly to blow the dust off the family Bible, maybe this will: Jesus wasn't the earliest biblical source to endorse liquid courage. No, that honor belongs to the book of Ecclesiastes, which even contains a kick-ass recipe for DIY beer. You've been served, Joy of Homebrewing!

For my money, though, the "real" story of Eve's origin is Uncensored's biggest scoop. As a literalist, the "official" version of her creation has always bothered me: Why would an almighty deity need to sedate and perform rib-removal surgery on Adam just to give him a love interest?  After all, didn't God just create an entire planet and all its life forms out of, well, nothing?

Relying on the work of a vibrant community of modern Biblical scholars, the authors answer this riddle, and it's flabbergasting: Bible-era Hebrews would have witnessed a wide range of mammal carcasses, the theory goes, and would no doubt have noticed a curious omission -- that man alone lacks the presence of an actual bone within his reproductive organ (yeah, who knew?). Add to this anomaly the presence of a raphe, or seam, running along the underside of men's members (evidence of God's handiwork), and the fact that the Hebrew word tsela -- interpreted by early Bible translators as "rib" -- can also mean "plank" or "beam." You see where we're going: Uncensored arrives at the mind-blowing possibility of Eve's phallic origin.

You may not subscribe to all 23 of Uncensored's shocking revisions. But I'll wager this: If nothing else, the next time you drop the kids off at Sunday school, this book will have you gripping the steering wheel just a little bit tighter.