The Vicious Circle of Malaria 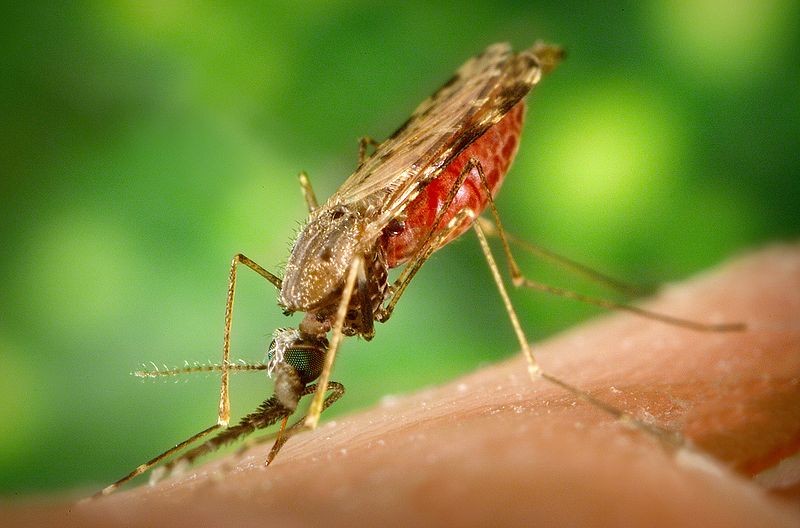 The last case of malaria in Humboldt County was reported in 2007, so it's practically a non-issue here -- an average of one case every couple of years. Nationwide, physicians report about a thousand cases per year, almost all treatable. It wasn't always so; malaria was once common in this country, especially in the warmer southern states, and it certainly contributed to the slow economic development of the South in the decades following the Civil War. Not until the early 20th century was malaria essentially eliminated from the U.S. by draining swamps and instituting aggressive public health education programs.
Unfortunately, the same can't be said for much of the world, with upwards of two hundred million (you read that correctly) cases of malaria annually, concentrated in the poorest African countries. Some 800,000 people -- mostly young children -- die from it every year.
Malaria has afflicted humans for half-a-million years or so, at least as long as we've have been slapping at mosquitoes, the vector of malaria transmission to humans. In a chicken-and-egg scenario, a mosquito acquires the wormlike malaria parasite by feeding on an infected human. After the parasite reproduces sexually in its gut, the mosquito feeds on, and infects, another human. After reproducing asexually in the person's liver, the malaria parasites then invade red blood cells where they feed on the oxygen-carrying protein hemoglobin. Most adults shake off malaria after a few weeks -- it's been compared to a severe bout of flu. Children under 5 (who lack immunity) are more vulnerable, and frequently die within hours or days of infection. Those who survive often suffer brain damage.
British, French and U.S researchers tentatively established the mosquito-malaria link around 1900, in time to positively affect construction of the Panama Canal (1904-1914). As Chief Sanitary Officer, U.S. physician William Gorgas instituted a program to reduce malaria by eradicating mosquitoes from the canal zone. (We now know that mosquitoes are also responsible for transmission of yellow fever and dengue fever.) Since mosquitoes lay their eggs on the surface of water, Gorgas' program focused on preventing the larvae from hatching by draining swamps or by dripping oil on the surface of standing water. Within two years, yellow fever had been virtually eliminated and malaria cases had dropped to a fraction of what they had been.
Today, the vast majority of malaria deaths occur in young children living in sub-Saharan Africa. Malaria both leads to poverty and causes it, accounting for as much as 40 percent of public health expenditure in some countries. Poor sanitation; inadequate drainage; shortages of simple insecticide-treated bed nets; limited and/or expensive medical supplies: All are implicated in the perpetuation of this entirely preventable disease.
The role of human greed is perhaps the saddest contributing factor to the continued existence of malaria. In a recent review in Harpers (March 2011), Helen Epstein reports that only a fraction of anti-malarial funds allocated by such programs as the Global Fund to Fight AIDS, Tuberculosis and Malaria actually go to prevention and treatment, with government and business corruption accounting for the rest. It's going to take more than money to stop the vicious circle of malaria.