Tab Benoit and the Voice of the Wetlands All-Stars, more V-Day music, KDTU and High Wolf 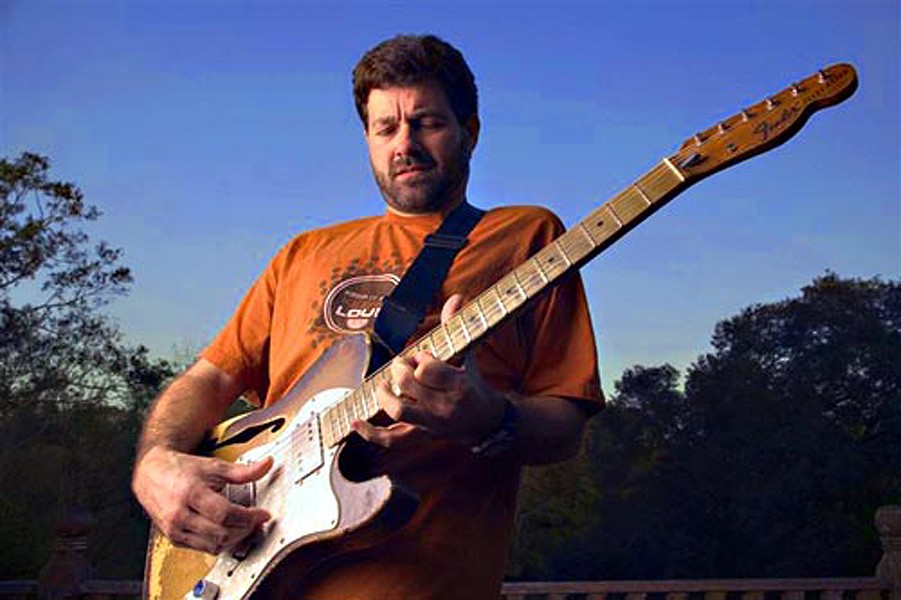 Bluesman Tab Benoit was born and raised on the Gulf Coast in a Louisiana town called Houda, about an hour's drive from New Orleans. When he's not out playing his guitar, he flies small planes, a hobby that gives him a bird's eye view of the Mississippi Delta environment. He's not trained in environmental science, but over the years it wasn't hard to see what was happening to the land he loved: It was slipping away.

The cause? "Erosion from manmade issues, from taking the Mississippi River out of the Delta system, digging canals for navigation and oil production -- all those things were working together on that soft coast you have when you have a wetland environment," he explained in a call from somewhere in the Southwest where he's on tour with a band called Voice of the Wetlands All-Stars.

The band, which includes Cyril Neville from the Neville Brothers, Big Chief Monk Boudreaux of the Golden Eagles and blues guitarist Anders Osborne among others, runs parallel to Voice of the Wetlands, a nonprofit Benoit established in 2004.

"The organization was started to try to do things that needed to be done," said Benoit. "You can't sit around waiting for people to do the right thing -- people like the government and big business -- that's not going to happen. We're looking for ways to change that and using our music to get the word out about the troubles we're having. The organization and the band kinda came together around the same time. I would go to my friends in New Orleans and try to explain to them that New Orleans is in deep trouble and this is why. I'd show them on maps and take them flying, 'cause I'm a pilot and I learned all of this stuff from flying the coast myself. I showed them the troubles with the levees where the land around them was eroding at astronomical rates -- this was before Katrina -- our infrastructure was falling apart."

The friends he talked to were mostly musicians. "I tried to get a hold of the biggest guys I could, you know, the Neville Brothers and Dr. John, The Meters and all the guys I knew. I showed them what I'd learned; they said 'Alright, whenever y'all do something, we're in.' We put on a festival to raise money to put out the first Voice of the Wetlands album, 'cause nobody wanted to put it out -- no record label wanted to touch it. We're doing this because we care about where we come from and the music is a big part of the culture; it's what binds us down there and it's one of the things people around the world love about that place."

The current VOW tour includes a stop Monday, Valentine's Day at Humboldt Brews. Benoit notes that it's basically to spread the word, both about the issues and about a new VOW album, Box of Pictures. "The song 'Box of Pictures' is something that Allen Toussaint and Cyril Neville and our fiddle player Waylon Thibodeaux wrote together. It tells this story about one of Waylon's relatives; she went to their house [after Katrina] and all she could find was a box of pictures. Even though they'd lost everything, this was a beautiful thing. They still had that and you know, it was more than some people had. It let them hold on to the history of who they are and where they came from."

The music connects to the core message -- that the coastline and associated wetlands are disappearing at a rapid rate. "It wasn't being talked about and it's still not being talked about," said Benoit. "Every time you turn around there's another push to get rid of us as they continue to grab the resources from that area and exploit them. And it's still going on -- bigger and badder than ever. Now with the BP thing that just happened you have a foreign oil company coming in making a mess, then controlling the entire zone that they destroyed. BP headquarters is in Houma, so I saw it all happen. That's the hub for all the oil in the Gulf. The bottom line is, we're sacrificing the Mississippi Delta for oil and shipping, and it's not a smart way of doing things.

"The real problem is the powers controlling things down here are bigger than the nation itself. People are starting to see that corporations and big business have more power than the government itself. This is the front line for a change you do not want in this country."

Elsewhere on V-Day: The Wiyos play a sit-down show at Arcata Playhouse featuring the NYC-based band's theatrical, exuberant Americana, plus an accordion/guitar duo, Troubadours of Divine Bliss, and some decadent desserts.

Meanwhile in Blue Lake, songstress Morgan Corviday leads a Valentine's Songswap at the Mad River Brewing Tasting Room, presumably with some love songs in the mix.

The Mateel has a Diamondback reggae V-bash with Ky-Mani Marley, son of Bob, plus Ishi Dube. "I can't think of a better day to celebrate love and good vibes than on Valentine's Day," says Ole of Diamondback. "Hopefully we can help heal a community after all the Reggae wars and bring everybody back together to enjoy and truly celebrate each other... . Sorry if I'm coming across preachy, but I truly believe in what I'm saying. Our local scene has been at war with itself for too many years, and all it ends up doing is hurting the fans -- fuck the politics and greed."

The Alibi in Eureka gets music rolling Saturday with Cool Cats and Rink Rats, a meet 'n' greet season kick-off for Humboldt Roller Derby skaters with music by The Monster Women plus auctions and giveaways.

Funky saxophonist Karl Denson is on the road again with his band Tiny Universe. He'll be a Humboldt Brews Thursday along with Lynx, an associate of the electro-combo Beats Antique. "I met her at the Austin City Limits Festival a few months ago. She's great," said Denson, calling from the road. "She'll open for us so she'll have her set, just her computer and her. Then we've learned a couple of her songs and we're going to attempt to back her on those during our set. And we'll get her to do some beat-boxing for us -- she beat-boxes really insanely -- so I'm hoping we can jam a bit."

What's the nexus between KDTU's jamfunk and bass-heavy computerized electronica? "I really look at it as all dance music," says Denson. "That's my approach to music as far as what I like -- it all basically relates to dance. When I'm not writing songs with Tiny Universe [they have an album in the works] I'm into the computer myself. I have some things I'm working on in terms of my electronic bent." The sax is still his main ax, but watch for some electro-Karl music in the future.

On the more ambient side there's the Starving Weirdos show on Sunday in the Buhne Ballroom (on the third floor of the Old Town building on G that will soon be the new home for Plaza Design). Trippy French solo artist High Wolf will be performing a collaborative set with Weirdo Brian Pyle's Ensemble Economique, recently featured in Pitchfork. Expect lots of space -- in more ways than one.