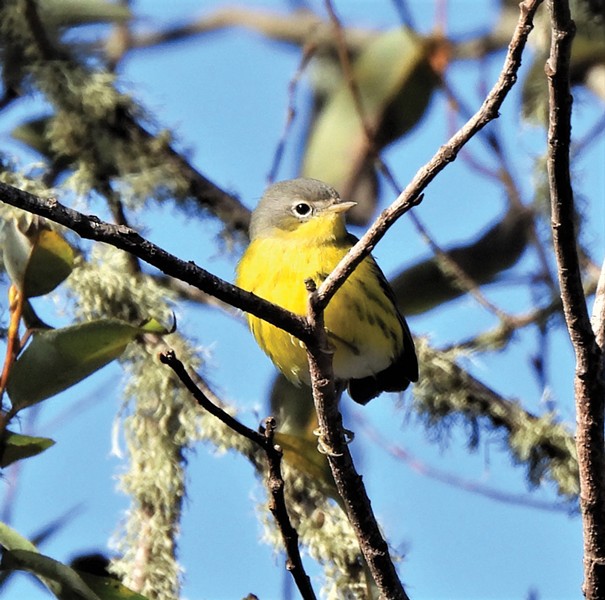 Photo by Sarah Hobart The magnolia warbler makes an appearance at the Bayshore Mall.

Photo by Sarah Hobart A prairie warbler seen hanging out at the mall.

A long-held belief in the world of birding is that when a rare bird is reported at a specific location, birders who flock to the spot to see it find other rare birds, attracting even more birders, who then find — well, you get the idea.

This phenomenon, known as the Patagonia Picnic Table Effect, got its legs 50 or so years ago after a couple of birders found an exceedingly rare bird at a rest stop in Patagonia, Arizona. Word spread rapidly even in those primitive days before internet and smartphone apps, and eager birders who converged on the rest stop discovered at least four other rarities. A cherished legend was born.

It makes sense: The more pairs of eyes searching high and low, the greater the chance of spotting something unusual, right?

Not so, according to a recent study from the University of Oregon. The study dispelled the Patagonia Picnic Table Effect as mere myth, showing no statistically significant increase in the discovery of rare birds following an initial sighting. Birders everywhere were devastated.

Now Humboldt is poised to refute the results of that study based on a recent explosion of vagrant warblers at the Bayshore Mall that's been dubbed the Walmart Picnic Table Effect by local birder David Juliano.

It's not unusual for a few eastern warblers to show up on the North Coast in fall. Scientists who study migration patterns believe internal navigational errors cause the birds to veer west instead of east, especially the youngsters on their first marathon flight. But seven at the same place?

It all began with a prairie warbler.

Generally speaking, fall warblers are drab little birds, lacking the vibrant colors of their spring plumage. But the prairie warbler was a stunner, a splash of sunny yellow with an olive green back and distinctive black facial markings. When it was reported at the beginning of November local birders dropped what they were doing and raced to the spot — not the wilds of Patagonia but those of Walmart.

That's where the warbler decided to hang out for a few weeks. Somehow the constant flow of human traffic, the occasional horn-honking over a prime parking spot and the drama of intermittent law enforcement sweeps suited the little bird perfectly. Basking in the afternoon sunshine, it put on a show for its admirers, flitting around the low willows and stopping to gobble up bugs and other tasty morsels while cameras clicked. Curious shoppers stopped by to find out what all the excitement was about and got a quick birding lesson. Who knows? Some of them may now be beginning birders.

Two days after the prairie warbler was found, a birder spotted another rarity at the same location: a Virginia's warbler. The next day there was an unexpected magnolia warbler. A birder looking for the magnolia found a northern waterthrush and an ovenbird, both — you guessed it — vagrant warblers. A day later a northern parula (warbler) was added to the list. Then a Tennessee warbler, more typically found in, well, Tennessee.

And the list may continue to grow as even more birders visit this offbeat retail hotspot. The windfall of warblers is drawing folks from all over Northern California, a nice little boost to the local economy. The other day I met a fellow who'd traveled up from Oakland to do a little warbler shopping. He had a good day, too, spotting the Virginia's among several others.

That's the only one that's eluded me so far but I haven't given up. In fact, I was back there a few days ago searching the trees and skirting broken bottles and abandoned shopping carts without luck. I didn't see quite as many birders out and about, either, but I had a nice chat with a mall security guard about rare warblers and what the heck I was up to.

Of course, it won't be long before the Walmart Picnic Table Effect loses momentum. The star players, after all, have migrations to complete, and with fewer birds, it follows there'll be fewer birders.

But I'm hoping these lovely wanderers stick around for a while. Sure, it's not the Caribbean but Humboldt has a lot to offer the discount-savvy warbler who might need to stock up on a few things before continuing its journey.

Sarah Hobart (she/her) is a freelance writer based in Humboldt County.

Get Out Birding Warblers Bayshore Mall