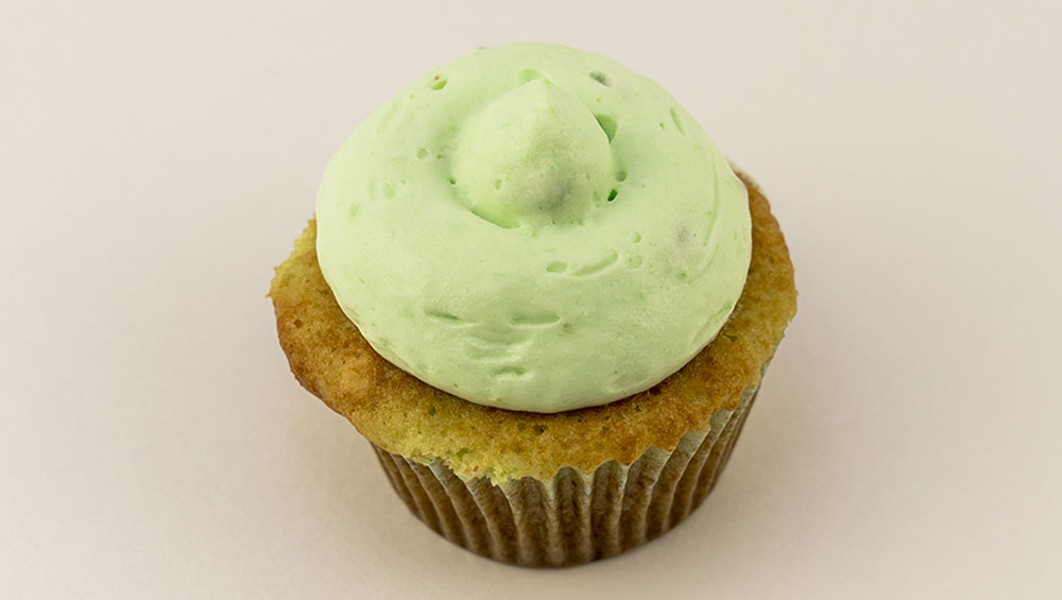 Zach Lathouris A Watergate cupcake from the age of gelatin molds and salads.

If you grew up in the Midwest in the 1970s, you didn't attend a family holiday, barbecue, reunion or get-together without someone bringing a version of ambrosia salad: Some concoction of whipped cream mixed with gelatin, pineapples, marshmallows, raisins, nuts, maraschino cherries, fruitcake candied fruit pieces, sprinkles, coconut flakes, spam, canned mandarin oranges and on and on. What I'm insinuating here is that anything in your pantry was fair game to throw into a gelatin salad and highly encouraged, if I'm reading my grandmother's old cookbooks as nonfiction.

All my nostalgia for the unhealthiest of summer desserts was brought back when I stumbled across a recent NPR segment on "Watergate Salad: A Fluffy Green Bite of Washington D.C.'s Past" by Gabe Bullard. My grandmother, Gladys Robison of Perry, Missouri, was a recipe addict. If the television show Hoarders had been a thing while she was alive, I might have been tempted to turn her in, particularly since I inherited her stockpile of more than 30 spiral notebooks of recipes clipped from the Vandalia and Hannibal newspapers, handwritten ones she copied from others, along with every cookbook collection from local churches and hospital guilds. They are currently stacked several feet high in my spare room and glare at me every time I go in to get something as if to say, "There are some treasures in here if you could be bothered to cook for your family." One of these recipes is my favorite cake — the Watergate "Tricky-Dick" Cake; the title alone was funny and scandalous when I was little, making the cake even more delicious.

Interested parties should look up the segment on the Watergate salad, a pistachio pudding and whipped cream mixture that has a series of mysteries as to its origin. What surprised me is that the cake pre-dates the salad. By all accounts, it gained popularity in 1974, a month after Richard Nixon resigned from the presidency. The supposition is that there was some partisan agenda to keeping the scandal of Watergate and Tricky Dick on the public mind and in conversation — what better way than to make a popular dessert that every good host served at every possible gathering?

In 1974, I turned 7 years old a few days before Nixon resigned and all I knew is that if I asked my grandmother to cook anything for me, she would do it happily. Fried chicken and homemade noodles for my birthday in the blistering Missouri summer? No problem and she'd throw in catfish, green beans (cooked with bacon until they were the saltiest, mushiest goodness ever), yeast rolls, corn on the cob, wilted lettuce (look it up, it's delicious), homemade ice cream, fruit pie with a lard crust — what I'm getting at is that she would fill the table with food and you'd be lucky to find space for your plate. There are some sad parts of being an only child of an only child but getting food-spoiled is not one of them. If you like pistachio, chilled cake and lightly sweet "frosting" then this is the cake for you.

Gladys Robison's Watergate Cake Recipe (with comments by me)

1 package white cake mix (she wrote not "angle food" — she was a great cook, not a great speller)

¾ cup vegetable oil (the lighter the oil, the better the cake)

½ cup chopped nuts (she writes, "if you want to" — I've never added more and neither did she)

2 envelopes of Dream Whip boxed toping mix (or another brand)

Heat oven to 325 F. Put the eggs, oil and 7-Up in a bowl, lay the cake and pudding mix on top and combine using a mixer. Grandma would grease and flour a 9-by-13-inch pan and that is certainly the easiest prep, but you can also do cupcakes with liners or any shape cake pans. For a 9-by-13-inch pan, bake for 45 minutes; for 9-inch round pans, bake for 30 minutes; for full size cupcakes, I toothpick test at 25 minutes and mini-cupcakes I check at 20 minutes. As long as a toothpick poked in the center of the cupcake comes out clean, they're done. Completely cool the cake on a wire rack and refrigerate it. This cake also freezes well for later use — just don't add the frosting until you're ready to serve.

Now to make the topping. Using a mixer, beat the milk and both envelopes of whipped topping until stiff. Gradually add in the pistachio pudding mix and continue beating until well blended. Spread on the cool cake or cupcakes and refrigerate until ready to serve.