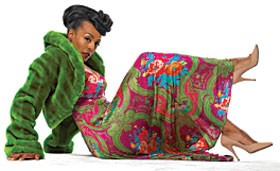 Marie Daulne has come a long way since 1990, when she founded the all-woman a cappella quintet Zap Mama . And it's not just that she's been around the world several times. The Zap Mama sound has evolved from an amalgam of African and European vocal styles to incorporate touches of jazz, hip hop, funk, soul and reggae, creating a polyglot of music and rhythm with Daulne out front.

When we spoke on a recent weekday morning, Marie was in New York City, far from home, preparing for an American tour in support of her latest album, Supermoon. The tour brings her to Arcata on Friday, Aug. 31, for a show at the Van Duzer, then, in a few weeks, to Black Oak Ranch near Laytonville, for Earthdance, an event she calls "a psychedelic world," remembering a previous Earthdance performance.

We started out talking about home. It's a complicated thing for her. Home is Brussels, Belgium, where she was raised, but also, in a different way, the Congo, where she was born. The transition was not exactly easy. Her Belgian father insisted that her mother take the family away from the political turmoil that was raging in what was then the Belgian Congo. She made it, but her father didn't. "He did not have a chance to come with us because he was captured," Daulne explained. "He was a prisoner of the rebels for a while, then they killed him. My mom had escaped with us, the little babies and children, and took us to Belgium."

She says memories of her homeland lingered. "When I was around 18, I didn't know why, but I was unconsciously attracted by the sound of the Pygmies," she said. "First, I should tell that before they escaped to Belgium, a lot of Belgian people hid themselves in the forest with the Pygmies and the Pygmies protected them. The rebels were afraid of the forest. So my family stayed a while with the Pygmies before we came to Belgium.

"So when I was 18, my ears were attracted to this sound of the Pygmies. I asked my mother about it, and I wanted to know more about the story of my father, why he was killed and where, so I decided to go back to the Congo, looking for answers about him. What I found was that I must become a musician. The sound of the Pygmies held some deep meaning for me, so when I came back to Belgium I created Zap Mama."

She did not really find exact answers to the questions about her father. "I found that human beings are strange," she said. "That's the answer. I found that there are good and bad people everywhere. I grew up straight away at the age of 18, and I knew that nothing is the fault of one person. Yes, sometimes one person can be the cause of a disaster, sure. But why does one man do something wrong? Why does one man kill another? I don't know that there is an answer to that."

Did she find home? Not really. "You know when I went back to Congo, I thought I would have a welcome like I was part of the family, part of the country, but that was not the case," she said. "They treated me like a Belgian come to visit as a tourist. I saw that that is not especially a place to call home. With my family, my husband, my children, the people I love — that is home."

Bad Kitty Productions has been bringing crazy rockabilly and the like to various local bars for some time now. This Thursday, Aug. 30, they shift gears slightly to offer a "Psychobilly Doubleheader" at the Manila Community Center for an all-ages crowd. TheKoffin Kats from Detroit team up with Zombie Ghost Train , a blast of costumed madness from the land down under (specifically, Sydney) touring behind a brand new CD, Dealing the Death Card . Bad Kitty's Norm promises, "The band's live show is the perfect blend of charm and horror and is guaranteed to get the crowd swirling."

Fans of the fine bluegrass/gospel outfit Huckleberry Flint , take note. As detailed here once before, fiddler Marybeth Taylor has been living down in S.F., so the band hasn't had many local gigs of late. That said, you may want to make a reservation for dinner at Café Brio this Friday, Aug. 31, where Huck'll be playing outside for sidewalk café diners.

One time Arcata City Council candidate Rob Amerman has been telling me about his new band, The Zygoats , for months now, and I had planned to make it to the Jambalaya last Friday for their debut performance and CD release party (how does that work?), but ... I guess I crashed early. Next chance to see the hard-rockin' Zygoats is Saturday at the Alibi, where they share the bill with Hexe , a heavy-duty guitar/drum duo who are working their way down the coast on their way back home to Oakland.

New on the reggae (not Reggae) front: The New Jerusalem Band , led by Madi Simmons, debuts Friday at Mosgo's. "It's roots with conscious lyrics, even some lover's rock," says Madi, who notes that there are two other singers beside him, a woman who goes by the name Omega Fire , and a cat who calls himself Haznebukuk.

Coming Tuesday, Sept. 4, to Six Rivers, The Salvador Santana Band . And yes, Salvador is related to that other Santana — he's Carlos' son. While he followed dad's footsteps into a music career, he did not take up the guitar he was given when he was 5. Instead, he settled on keyboards. He has an album done, but not yet released. In the meantime he's been working the festival circuit (Bonnaroo, High Sierra) and earlier this year contributed a track to A Song For My Father, a Father's Day album put out by Target stores. The compilation, which also includes cuts by Ky-Mani Marley, Ivan Neville, Devon Allman and others, opens with Carlos' classic, "Evil Ways."

Also on Tuesday, at Muddy's Hot Cup, Magnolia Electric Co. , on their way south after playing Bumbershoot, the massive Labor Day festival in Seattle. MEC is the current nom de band of Jason Molina , a globetrotting ex-Ohioan who formerly recorded as Songs: Ohia. He's just released the Sojourner box set on Secretly Canadian, an ambitious collection that includes four CDs, all new material, each disc recorded with a different lineup in a different place (including the legendary Sun Studios), plus a tour DVD documenting the sojourner's life on the road, a few postcards and a commemorative medallion. The music? I'd describe it as plaintive, stately folk rock, with shades of Will Oldham or maybe Neil Young (but with a stronger voice). Jason and Co. are on the road with Golden Boots out of Tucson, Ariz., who describe themselves variously as a Goth country band and as a "crumbly western, alt. alt. country band." Fair warning: show up early — Muddy's will fill up for this one, as well it should.