The Weed Gets Freed 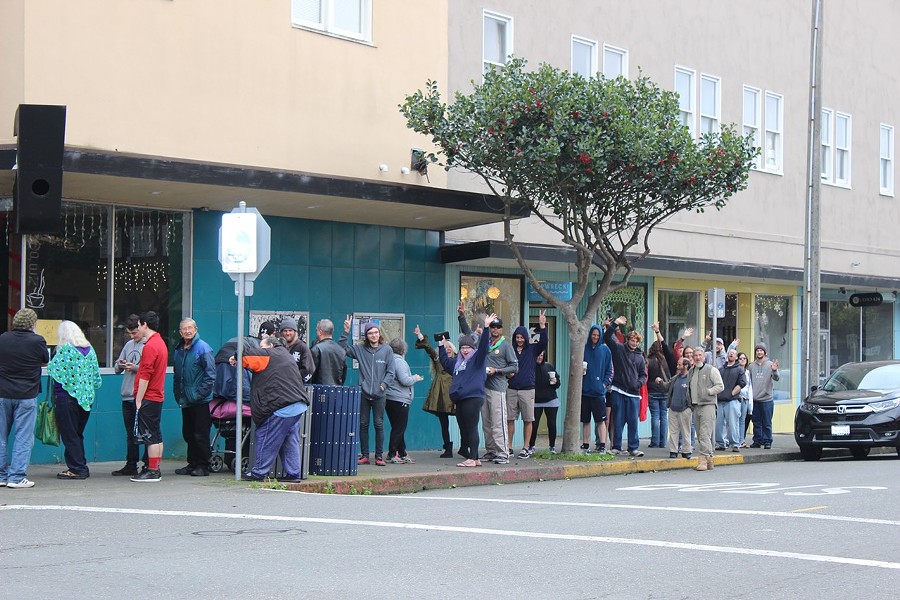 Laura Montagna was the first in line, having shown up at about 10 a.m. — two hours before Eco, then the only state licensed dispensary in Humboldt County, was slated to open its doors. What was she planning on buying, a reporter asked.

"I have no idea," she laughed. "I don't even smoke. I just think it's historic and cool. ... I hear there's a strain that helps you clean your house. I'll ask for that."

While a number of local dispensaries were rushing to get their paperwork submitted to the state with the hopes of being licensed in time for the opening of the state's recreational markets Jan. 1, only Eco got the nod. The Humboldt Patient Resource Center in Arcata only got local recreational permits last week and quickly rushed its paperwork to the state, which apparently couldn't process it in time to make the deadline.

Andrew Jordan, a local contractor, said he showed up at the Arcata center but employees greeted him at the door, telling him they hadn't received the necessary license and sending him on to Eco.

The Humboldt County Collective, a dispensary just outside city limits on Myrtle Avenue, got its permits in time to open Jan. 2 for recreational sales.

While there is a lot of uncertainty surrounding the state's new regulatory framework — with everyone from farmers to dispensary owners wondering if they'll be able to stay competitive and make ends meet — the mood in line among Humboldt's first recreational customers was jovial. A man played music from a small speaker — The Beatles, Bob Marley, The Grateful Dead — saying he made the playlist special for the historic day.

Eco's doorman, Troy McCornack, opened the doors as soon as the clock struck noon, began checking IDs and letting customers file in 10 at a time. Inside, there was a distinct children-in-a-candy-shop vibe.

"I need one," he said resolutely.

A few minutes later, he filed out with some dabs, live rosin and one of the pot sodas. Was the shopping experience everything he dreamed it would be?

A few minutes earlier, Montagna handed over some cash in exchange for two small bags of cannabis, which Eco manager Ray Markland tucked into one of the opaque zip-close packages required by the state. Asked what strain was recommended for helping with those house-cleaning chores, Montagna smirked.

By the time Montagna left the store, the line had stretched around the corner and down Third Street, with more than 50 people waiting to legally buy cannabis in the heart of Humboldt County. Some were already smoking joints or puffing vaporizers. A KMUD DJ had set up a table with a boom box and a stick of Nag Champa incense sending twists of smoke into the air.

There is plenty of uncertainty about how fully legal weed is going to work in California and what it will mean for Humboldt County, but on Jan. 1 a lot of people just seemed really excited to walk into a storefront to buy some cannabis.