'The Weight of History' 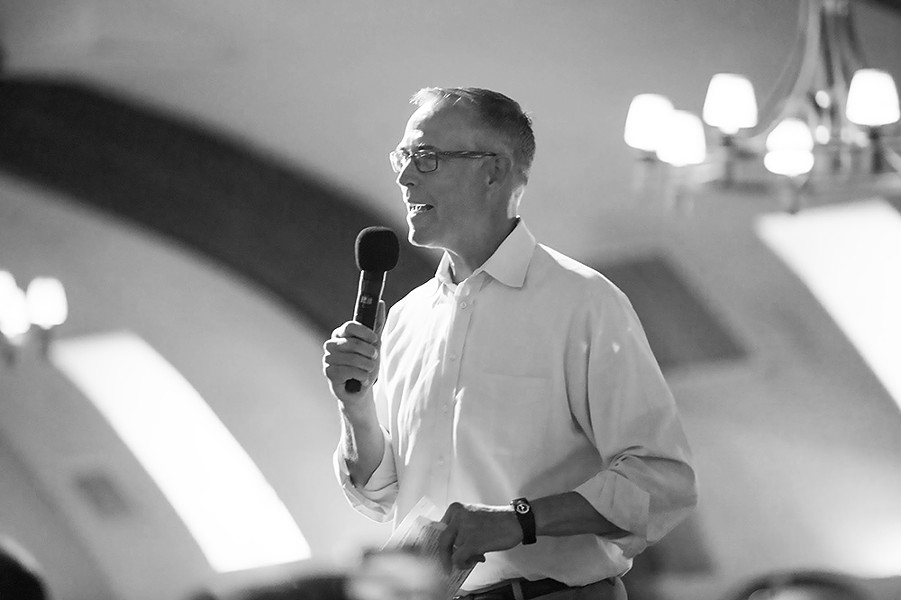 Submitted A vociferous critic of Donald Trump from the first days of his presidency, North Coast Congressman Jared Huffman spent part of the recent federal government shutdown picking up "Trump trash" in a national park in his district.

It was a day North Coast Congressman Jared Huffman had long been pushing and waiting for, but when Dec. 18 came and the U.S. House of Representatives readied to vote on articles of impeachment for President Donald Trump, it was a bit strange.

"It has been quite an odyssey," said Huffman, who was one of the first members of Congress to begin calling on colleagues to launch an impeachment inquiry and co-sponsored Articles of Impeachment introduced in February of 2018. "Wednesday was a little bit surreal in the sense that it was one of those huge, momentous days — the weight of history was weighing on everybody — and yet it was also one of those hurry up and wait things. We didn't have a lot to do."

The one thing on Huffman's to-do list that day — other than voting in favor of articles of impeachment charging Trump with abusing the power of his office and obstructing Congress — was to write the one-minute speech House Speaker Nancy Pelosi had afforded each member to make one last argument for or against making Trump just the third president in the nation's history to be impeached and face removal from office in a Senate trial.

"That took up a big part of my day, really," Huffman told the Journal. "It takes longer than you think to write a one-minute speech when you think the whole world is watching and your kids and grandkids will read this. I had one minute to explain myself. A lot of members just kind of regurgitated talking points. I don't think that adds much value so I wanted to throw away those talking points and speak to what I believe this moment is all about."

Here's what he came up with:

"Madam Speaker, as we take this solemn, necessary step of impeaching President Trump, my Republican colleagues have made up their minds; we can't persuade them to do the right thing. So, I address my remarks to the future. Because today's vote will be judged by future generations including my precious children Abby and Nathan. Maybe grandkids.

"Historians will study what members of this Congress did when our democracy was tested like never before by a president who put personal interests above country; who compromised national security to cheat his way to re-election; and when caught, not only lied and refused to admit wrongdoing, but flouted Congress' authority. He even called the Constitutional impeachment mechanism 'unconstitutional.'

"Historians will marvel how some members continued to stand by this man; how they put blind partisan loyalty — or fear of Donald Trump — above their duty to defend the Constitution; how they made absurd partisan arguments and tried to obstruct these proceedings; and how, instead of pushing back when their party fell under a dark spell of authoritarianism, they embraced it — as if the Constitution, the rule of law, and our Oath of Office mean nothing.

"So, Madam Speaker, for our future generations, our children, and the judgment of history, let me be clear: I stand with our Constitution, with the rule of law, and our democracy. I'll be voting 'yes' to impeach Donald J. Trump."

The final votes — 230-197 on abuse of power and 229-198 on obstruction of Congress — fell almost entirely along party lines with no Republicans voting to impeach the president. Democrat Collin Peterson of Minnesota also voted against impeachment and Democrat Jared Golden voted yes on abuse of power but no on obstruction. Former Democrat Jeff Van Drew, of New Jersey, also voted against both articles just days before announcing he was switching party affiliations.

Huffman said he was impressed by the "incredible poise and courage" that "vulnerable frontline Democrats," including some freshmen just elected in districts Trump carried in 2016, showed in the vote.

"In some ways, the defection of a moral jellyfish like Jeff Van Drew makes their example even more impressive," he said.

While noting that he's a "rank-and-file" representative who doesn't have a seat on the judiciary or intelligence committees, Huffman said he feels he was able to help move the needle on impeachment both with some colleagues and the public by being persistently outspoken on the issue. Saying he's not one of those representatives who is "always at the microphone," Huffman said word got out to cable news producers, newspaper reporters and editors that he was willing to publicly make the case for impeachment, which he did repeatedly.

Back in June, the Journal ran a long interview with Huffman ("The Case for Impeachment") in which he argued the House should launch an impeachment inquiry looking at four things: Trump's alleged violations of the emoluments clause of the Constitution; his alleged obstruction of the Russia investigation; his alleged abuse of power in overriding national security officials to grant security clearances to members of his family; and his alleged violation of campaign finance laws in 2016 when he allegedly orchestrated a six-figure payout to keep a porn star from speaking publicly about an alleged affair, or as Huffman put it, "the stuff (Trump's former attorney) Michael Cohen is sitting in a prison cell for doing at Trump's direction."

Then came what Huffman called Trump's "most egregious misconduct," the Ukraine scandal, in which Trump pressured U.S. ally Ukraine by withholding a promised White House visit and $391 million in Congressionally approved security assistance in exchange for public announcements that the country was launching investigations into both the conspiracy theory that it, not Russia, had meddled in the 2016 election and the debunked corruption allegations against Joe Biden, then the Democratic frontrunner to challenge Trump in 2020. Trump has argued he did nothing wrong by pressuring Ukraine to investigate "corruption" but has insisted there was no quid pro quo, talking points Republican members of Congress have largely echoed.

There was reportedly a divide within the Democratic caucus as Pelosi mulled what articles of impeachment to bring to the floor for a vote.

"I am certainly in the camp of wanting to hold Trump fully accountable for the full range of misconduct," Huffman said, adding that he feels the reported divisions in the party are overstated. "These are all impeachable offenses. These are all things he should be held accountable for. But politics is the art of the possible."

Looking back on the few months since news of the Ukraine scandal broke, Huffman said it's been like "an anthropology study" watching Republicans, some of whom initially seemed troubled by the fact that Trump had asked a foreign president to investigate his political rival, rally around the president and the talking points spewed by right-wing pundits, which included more attacks on the inquiry's process than defenses of Trump's conduct or exculpatory evidence.

"It was such a fascinating and frankly distressing demonstration of groupthink," he said. "Fox News and the administration — these echo chambers — gave (members of Congress) cover and they all kind of gradually got comfortable with that."

Moving forward, Huffman said he's interested to see what happens in the Senate with "the few Senators who haven't fully drunken the Kool-Aid." While still hoping the trial will end with Trump's removal from office, Huffman said whatever happens, he feels the House did what the Constitution demanded of it.

"Even if Trump survives the Senate trial, which he is likely to do, this has really highlighted for the American people the deep corruption and lawlessness and the pattern of cheating that is Donald Trump," he said.

's news editor and prefers he/him pronouns. Reach him at 442-1400, extension 321, or thad@northcoastjournal.com. Follow him on Twitter @thadeusgreenson.