The Wildness of Natural Process 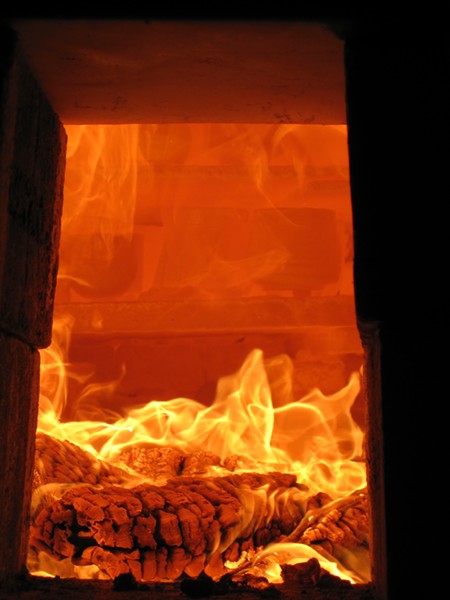 Photo by Jason Marak Fire in the kiln

There is something appealing about doing things the way they've been done for centuries -- sailing, leavening bread, celestial navigation -- they offer us a connection to the past, contact with tradition. They help us to place ourselves, to feel part of a continuum. There is also something inexplicably attractive about activities that incorporate primary elements -- fire, earth, air, water -- having your hands in the soil planting seeds or sitting around a fire pit on a cold, clear night, stars spread out overhead. Our eyes are drawn to places where the effects of elemental forces are visible--the smooth curve of stone that has been shaped by centuries of rushing water, the graceful arch of the trees that have grown, wind-bent, along our coast. These things are aesthetically pleasing. So, it seems only natural that people are drawn to the look and process of wood-fired ceramics.

People have been wood-firing clay for thousands of years throughout much of the world. For most of that time it served as the sole method of hardening clay into usable forms. The process fell out of favor in the United States with the advent of the industrial age when gas and electric kilns were developed. These newer methods offered greater speed, control and convenience and were generally seen as advancements. However, the tradition of wood-fired ceramics did not die out. In fact it continued to thrive in places like Japan.

Dave Zdrazil, a 32-year-old ceramic artist and teacher who conducts classes and workshops at Fire Arts in Arcata and College of the Redwoods, found growing interest in the wood-firing process and what has kept this tradition alive and vital for so long. With help from two other local potters, Thomas Fossier and Conrad Calimpong, he put together West Coast Wood Fire, a series of exhibits and events featuring artists from California, Oregon and Washington.

"A few years ago we built the wood-kiln at CR, and from there it just kind of snowballed,"  said Zdrazil. As interest in the project grew, Zdrazil saw an opportunity to broaden the scope to include lectures and demonstrations by established ceramic artists, including Terry Inokuma from Oregon and Richard Hotchkiss from Nevada City. "We're wanting to reestablish the place of this traditional art form as part of the cultural resources of this community," said Fossier.

In addition, Zdrazil ran a wood-fire workshop over a six-day period in mid-February. Using a wood-burning kiln he constructed at his home in Eureka, he took participants through loading, firing and unloading the wood-fire kiln, a labor intensive and time consuming process best carried out by a group. Fire Arts members came together to place their collected work, more than 100 pieces, into the kiln. Pieces were passed to Zdrazil who sat inside the kiln, carefully placing work of various sizes in different positions around the interior of the large, brick, dome-like structure. People commented on the forms as they were loaded and speculated on how they might turn out. As the space filled with pots, the anticipation and speculation continued to build.

There are many wood-firing styles and techniques, but the basic principles are the same. At very high temperatures (often as high as 2,300 degrees Fahrenheit) the ash that circulates inside the kiln comes into contact with the clay body and melts, forming a kind of natural glaze. The clay surface can also come into direct contact with the flame, causing colorful flashing. The movement of the ash and flame is, in a sense, captured or recorded on the surface of the pot. Effects can be dramatic or quite subtle. Results can range from glassy, colorful surfaces where the flame and ash have come into contact with the clay, to rougher more porous surfaces and even surfaces with thick, almost crusty deposits.

No two wood-fired pieces are identical. There is a level of unpredictability in wood-firing that is actually part of the appeal. The potter has some control over the outcome based on clay type, position of the pot in the kiln, and the length of time the kiln is fired. However, the actions of ash or flame are up to chance. Basically, you never know exactly what you are going to end up with until you unload the kiln days later.

OK. It's time to say it. Cover little Billy's ears. Fire is fun. More than one Fire Arts member admitted having a touch of the pyro-bug and, from what I saw on the first night of the firing, I can understand why. Looking into a kiln burning at 2300 degrees makes an impression. The color and movement of the flame is entrancing; it has an almost otherworldly quality. The flame is drawn through the body of the kiln and vents dramatically out of the kiln's chimney, casting a conflagrant glow around the kiln's perimeter. As a wood-fire kiln approaches the target temperature, it requires almost constant stoking. Zdrazil's kiln is small by wood-fire standards, and still it burned nearly a cord of wood during the 26-hour long firing. Workshop participants took four-hour shifts, feeding the fire until it reached the desired temperature. Then, the fire was allowed to burn out and the kiln cooled for about three days.

Finally, it was time for the unloading, a process Zdrazil compared to Christmas, "like opening a huge present." As the pots were handed out of the kiln and passed bucket-brigade style, members again admired each other's work. There were audible gasps as the pieces, utterly transformed by the process, were brought out into the daylight. After the last piece was removed, the workshop came to a fitting end with the group sharing a sake toast, served in vessels that only moments before had been taken from the kiln.

It was a very successful firing: Few pieces were lost and many beautiful results were realized. While I was struck by how very different each one was from the next, they also shared something. Fossier had told me earlier, "Each wood fired pot is a unique work of art that celebrates the dance of the potter's intention with the wildness of natural process." Perhaps this is what they all had in common. Each piece contained something of that play of will and chance -- the unpredictability of the fire always with the upper hand, mirroring the unpredictability, the element of chance that, for better or worse, is a part of every life. Seeing the connection is a comfort. Part of the pleasure of wood-fired ceramics comes from holding or beholding something that itself holds a record of that elemental fire and ash. It brings you a little closer to something very important.

West Coast Wood Fire and Horai Center for the Study of Pacific Culture will also host a traditional Japanese tea ceremony demonstration in the Creative Arts Gallery at College of the Redwoods on Friday, March 9, at 1 p.m. www.horaizons.blogspot.com