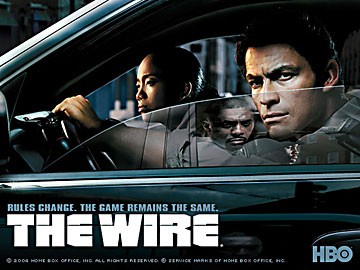 HBO's The Wire, now in its fifth and final season, may be the most critically acclaimed television series nobody knows about. In addition to receiving a Peabody award, the police drama has been rated the best in its genre by The New York Times, Entertainment Weekly, TV Guide, TIME,and the Washington Post.

If you're nota Wire fan, you probably think that a truly exceptional TV series wouldn't be in the Nielsen ratings cellar. The Wire audience has been limited by its soap opera formula, but intricate plot lines aren't the only thing that has discouraged cable channel surfers. Thematically, the show cuts a little deeper.

The Wireis alayered narrative about the messy nexus of criminality, race, class and institutional power, packaged as a police drama. Since 2001, the series has presented a multi-dimensional perspective on issues like the drug trade, the demise of organized labor and the crushing pressures facing public schools. It's storytelling about individuals, but the impact of societal forces is ever present.

This is most evident in the way race and race relations are depicted. With the most nuanced African-American cast in TV land, the principals portray good and not-so-good cops up and down the chain of command, crime kingpins and their minions, politicians and average citizens caught in the crossfire.

The relationships between the black and white figures run the gamut from seamless to strained, with some characters barely able to squash their isms long enough to gain or maintain some advantage.

Sometimes, class seemingly trumps race as the tie that binds. In season two, barely employed white and black harbor workers have more in common with each other than with the downtown political brokers who hold their livelihoods in the balance.

Most Wirecharacters are motivated by comfortable allegiances, but the most calculating players are instinctively exploitive. In this way, politicians, cops, the business elite and street ballers are interdependent. The savviest criminals covet the path to "legitimate" power and wealth. And the greediest cops and civic leaders are vulnerable to bribery by the so-called bad guys. Corruption is a repeated theme on the show.

Cop dramas usually tackle big issues like corruption by having drop-in actors embody the societal evil of the day. Then the show's regular cast mops up the mess, and closure is guaranteed before the credits roll. On The Wire, it's the ensemble cast that struggles with personal demons — everything from selfishness and infidelity to alcohol and drug abuse. And then there are the systemic realities that they have little or no control over. To stay relevant, they all make some predestined choices, but only street criminals have the bravado — and cops the authority — to mete out inconsequential violence.

The street criminals include guys and gals just trying to pay the rent, social climbers and high functioning sociopaths. Likewise, all of The Wire politicians succumb to politics, but a select few are as morally adrift as the scariest street thugs. Unlike the parade of dead primetime bodies displayed for our TV viewing pleasure, the violence portrayed on The Wire is infrequent but usually happens in real time. And it's always chilling.

Despite the show's heavy dose of reality, Wirefans are rewarded with a taut narrative, unexpected humor and fleeting moments that capture the breadth of the human condition. Since its inception, The Wire has presented an amazing array of authentic characters to tell stories about people and their relationship to power. The show has managed this without flinching, while using Baltimore as a backdrop to chronicle the decay of American cities.

The final season focuses on media politics. If you're unfamiliar with the show, DVD tutorials (season one through four) offer the path to enlightenment. Skipping the earlier seasons (or individual episodes) is convenient, but if you take this road, all will not be revealed. That's a promise.