The Women Behind the Trees

Laura and James Wasserman's Who Saved the Redwoods? The Unsung Heroines of the 1920s Who Fought for Our Redwood Forests 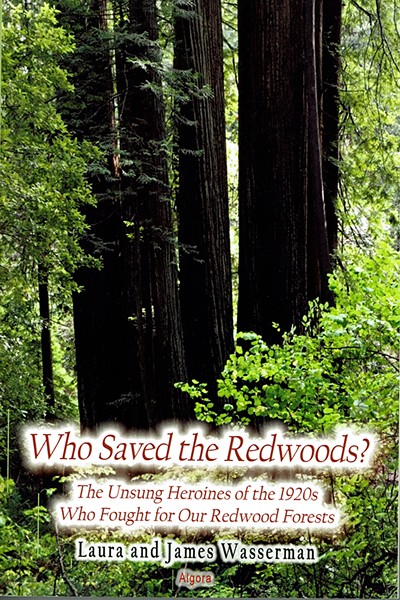 Submitted Who Saved the Redwoods? The Unsung Heroines of the 1920s Who Fought for Our Redwood Forests by Laura and James Wasserman

On Nov. 10, 1924, the Pacific Lumber Co. began secretly logging its timberland near the mouth of the South Fork Eel River. The plan was to cut a right-of-way through the forest that would allow the company to reach Bull Creek Flat, about a mile away, and then level thousands of acres of old growth redwoods.

Two weeks later, Laura Perrott Mahan, part of a ranching family from Table Bluff and president of the Women's Save the Redwoods League of Humboldt County, drove down to the South Fork with her husband, James, saw the devastation and alerted the Eureka newspapers. Within days a unanimous Humboldt County Board of Supervisors threatened to condemn Pacific Lumber's tract of timber. The logging ceased. Permanently. Seven years and several million dollars later, the Bull Creek and Dyerville flats became a part of Humboldt Redwoods State Park, the largest tract of old growth redwoods to be found anywhere on the planet.

Credit for protecting the flats usually focuses on the San Francisco-based Save the Redwoods League, which started as a collection of wealthy and influential men who could walk the corridors of power and easily gain admission to the citadels of government and business. Now, however, comes another side of the story, told with detail and passion by Laura and James Wasserman. (Full disclosure: I advised the Wassermans regarding research for their book.)

Like the movement to save the redwoods itself, the Wassermans begin slowly with the story of human interaction with the trees. By chapter two, however, the narrative hums with urgency as both locals and Bay Area activists view the destruction along the new Redwood Highway and act to stop it. The center of my copy bulges with sticky notes where the Wassermans interlace dozens of telling quotes with a compelling summary of the movement's "crisis period" during the 1920s and early 1930s.

The book traces the development of the grassroots effort to protect the North Coast redwoods, emphasizing the leadership of Laura Mahan but also acquainting us with other members of the Women's Save the Redwoods League of Humboldt County, including Ella Georgeson, the wife of a former Eureka mayor, and Kate Harpst and Mary Ann Atkinson, whose husbands both owned redwood mills. The Wassermans also describe how the local women helped expand the movement so it involved both the General Federation of Women's Clubs and the Garden Club of America, two nationwide organizations that rallied the voices (and pocketbooks) of thousands of women throughout the country. As the book's subtitle indicates, these women were "the unsung heroines of the 1920s," but thanks to the Wassermans, their praises are finally being sung.

Laura and James Wasserman will be at the Clarke Museum on Friday, June 7, from 5 to 8 p.m. for a book signing, and on Saturday, June 8 for a book talk at 1 p.m.