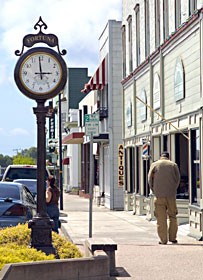 The New York Times ’ wordsmith William Safire would have a field day if he visited Fortuna now. That’s because the City Council there is pulling out its hair over how future generations might define the phrase “preserving small-town qualities,” as contained in the city’s General Plan Update (GPU). At its Oct. 2 meeting, the Fortuna City Council considered eliminating the phrase from the GPU entirely, as it might someday squelch development.

Some, like City Councilmember Mel Berti feel that those four words will hold back development. “The people of Fortuna need shopping,” he said imperatively when reached by phone at Hoby’s Market in Scotia on Tuesday. But that’s not all they need, he said — they need jobs as well. “A city thrives on businesses,” he explained. By deleting those four pernicious words from the GPU, it’s like laying out a welcome mat for big box retail, and big boxes mean jobs, he said. Even the $8-dollar-an-hour kind, according to him, are better than nothing.

Berti claims the Council’s move to redact the GPU represents the desire of most Fortunans. “The Council represents the majority of the people,” he said. But Fortuna businessman Clif Clendenen, who recently announced his candidacy for the Second District Supervisor seat, doesn’t think so. He said he’s heard “resoundingly” from the community that Fortuna’s small-town qualities are what people like best about the place. Reached by phone on Tuesday, he said that keeping the phrase in the GPU “would set a tone to encourage development in a good way.”

City Councilmember Doug Strehl also doesn’t necessarily think the phrase needs to be thrown out. “As far as the wording, I had no trouble leaving ‘small-town atmosphere’ in,” he explained over the phone from his shoe store in Fortuna on Tuesday. “But my perception of a small-town atmosphere is something the people carry with them. It doesn’t necessarily have to do with the size of the city.”

Still, Strehl understands where the Council is coming from. At issue is future interpretation. “We’re trying to make it clear enough 20 years from now what we meant,” he said. “There was a concern on the Council that if we wrote ‘small-town atmosphere,’ 20 years from now that could mean ‘no growth.’”

But Strehl isn’t worried that nixing Fortuna’s small-town qualities in words will change the city in deeds. “I would still love it to be the Friendly City,” he said.

There’s no question about that, according to Berti. “Fortuna will always be the friendliest people,” he said. “We go out of our way to make sure contractors can do things legally. After it’s all through, everybody’s happy.”

But nothing, as of yet, is written in stone. Fortuna City Planner Stephen Avis said Tuesday that no changes to the GPU have yet been made. Proposed changes will be decided on at the end of the month. Avis will recommend keeping the phrase, but defining it clearly. “We want the document to be as complete as possible, to be an accurate reflection of the community and as useful a tool [as possible] for guiding future development,” he said.

You might be wondering right about now: How exactly will small-town qualities be defined? Therein lies the rub. “It’s like that famous line from the Supreme Court,” Clendenen explained. “It’s hard to define it, but you know it when you see it.”