And a little taste of history 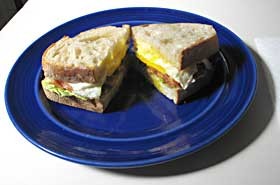 It’s still prime tomato season at the Farmers’ Market. Every year, it seems the tomatoes have more variety and get meatier and more flavorful. This time of year, we try to have BLTs every Saturday morning. And this column is about a BLT, sort of.

While I consider myself the second-best sandwich maker on the North Coast, I am not, alas, the complete sandwich connoisseur I would like to be. I have never had banh mi in Saigon, gorditas in Guadalajara, fried-oyster loaf in New Orleans, choripanes in Buenos Aires, souvlaki-pita in Athens or dozens of other wonders.

On the other hand, I have had Croque-monsieur in Paris, and the World’s Worst Hamburger in Manchester, England. I’ve had the pulled-pork barbecue sandwich in Charleston, and the Cheesesteak in Philly (yes, with CheezWhiz, and it was terrific). Once, in 1959, at San Francisco’s Beat Generation shrine, The Dante Billiard Parlor, I had a warm Gorgonzola and red onion sandwich on oven-fresh sourdough. And in New York, I’ve feasted on the definitive Sabrett’s hot dog, the reuben sandwich at the original Reuben’s, sausage-and-pepper loaf in Little Italy and my personal ultimate sandwich, half a pound of extra-rare deli roast beef, sliced paper thin, piled onto a Kaiser roll and slathered with too much Russian dressing.

Recently I’ve noticed a growing underground current of food enthusiasts who claim to have discovered “The World’s Greatest Sandwich.” The first hint of this sandwich came to us when we watched the video of Spanglish , a movie that’s gotten terrible reviews but which we rather enjoyed (not liking Adam Sandler as a comic, we were surprised at how good an actor he was). Midway through the movie, Sandler, playing a celebrity chef, comes home from his restaurant and makes himself a sandwich. It seemed clear that this was more than “just a sandwich,” but it was hard to get details in the course of the movie.

But then at the end of the DVD — shazam! — there was a little video extra — “How to Make the World’s Greatest Sandwich featuring Thomas Keller” — showing Sandler being trained, step by step, by the legendary chef. Naturally, I took notes. And then I made it a couple of times, and it wasn’t difficult. I even started requesting it at a couple of our favorite lunch places, and a good line cook has no trouble making it (of course the ingredients, which are what make it cosmic, are not going to be the same quality at a commercial restaurant).

Now, anything with a boast like this is going to get pounded on the web, but surprisingly, while there are many competitors for “World’s Best,” only one or two condescendingly call this “a glorified BLT.” Of course, that’s what it really is. The difference is really the difference between the way Thomas Keller does everything and the way we mortals do it.

Keller is the most influential and forward-looking chef in America. His attention to detail is legend, his creative and whimsical approach to cuisine outrageous, his lack of pretension refreshing. And he never loses sight of the goal of quality: From him, we have learned to wash (yes, with soap) cuts of meat before using them. It is educating to see how much detritus comes away. Keller has often been profiled, but the best book is one in which his story is just one of three: Michael Ruhlman’s The Soul of a Chef — The Journey Toward Perfection . If you are a serious cook, it will thrill you.

The modern sandwich seems to have been invented by the 4th Earl of Sandwich, John Montagu. He was a wealthy and powerful, if perhaps dissolute, British Lord of the Admiralty in the late 18th century, whose financial support of Captain Cook’s explorations was rewarded by the naming of The Sandwich Islands, an archipelago we now call “Hawaii.” Disdaining time spent away from gambling, the Earl called for meat enclosed in bread to be brought to him at the table.

The sandwich was an invention readily adapted to rough-and-tumble America. Here’s a recipe for ham sandwiches from an early cookbook, Elizabeth Leslie’s Directions for Cookery , suggested as a supper. (Dinner, of course, was the mid-day meal, as opposed to the evening meal of leftovers, meat or mince pie, cold porridge or cornbread.)

Ham Sandwiches — Cut some thin slices of bread very neatly, having slightly buttered them; and, if you choose, spread on a very little mustard. Have ready some very thin slices of cold boiled ham, and lay one between two slices of bread. You may either roll them up, or lay them flat on the plates. They are used at supper or at luncheon.

While there is scant documentation, my hunch is that the sandwich in the U.S. evolved from street food, of which there was plenty, particularly at public events. Hamburgers date to the 1880s. Sausage sandwiches were popular long before they were called hot dogs:

Before long he halted in the presence of a red-faced man who flourished a long fork over a small cooking apparatus and shouted jovially: “Winnies! Here’s your hot winnies! Hot winny-wurst! Food for the over-worked brain, nourishing for the weak stummick, entertaining for the tired business man! Here’s your hot winnies, three for a nickel, a half-a-dime, the twentieth-pot-of-a-dollah!”

--from Penrod , by Booth Tarkington

Somehow, though, it seems that the platonic concept of “sandwich” involves more than a single ingredient between slices of bread. It should have invention, intrigue, romance. It should at least combine elements not usually joined: Beef tongue (actually available at Murphy’s deli) and pastrami, for instance, on North Coast Bakery dark rye, with hot-sweet mustard. Olive oil-marinated fresh mozzarella, tomato and basil on Brio Olive Bread. Lox and cream cheese, with paper-thin onion, dill and capers, on a toasted sesame Los Bagel.

And that’s why, returning to our main topic, the Keller sandwich (which he calls “Late Night BLT with Fried Egg and Cheese”) is so successful. It combines the traditional BLT with strong additional elements.

This is the basic concept. Watching Keller is a small education. Notice how careful he is to alternate the bacon slices, producing his own little box of salt from a pocket, handling the food, even this casual sandwich, with respect.

The reality is a bit more complicated.

I know what the recipe says, but I also know that the jar of mayonnaise in the video looks nothing like a regular supermarket one. It doesn’t look homemade, either. My guess is it’s Miracle Whip, which is sweeter than mayo. I think the bread could be any of several Brio or Co-op sourdough or country loaves; I also doubt that it is merely “toasted” — I think it was brushed lightly with oil or butter, then put under the broiler for 20 seconds, then the cheese added to one slice and put back for a few more seconds to melt. And I’ll bet the egg was really fresh.

Here’s how I’d interpret the directions:

Get everything ready before you start cooking. Slice the tomato 3/16” thick; rinse and pat dry the lettuce; cut the bread on the thick side, 1/2- to 5/8-inch; break the egg into a bowl, making sure the yolk is intact.

Cook 4 slices bacon over medium heat about 8 minutes, and drain on paper towel. (Don’t let it become so crisp it crumbles, nor leave it too limp.)

Lightly brush bread with oil, then toast under the broiler, about 20 seconds.

Add the cheese to one slice, and put in the oven again briefly, just enough to melt.

Spread Miracle Whip (or mayonnaise) on the other bread slice. Don’t be skimpy; make sure every part of the surface is covered.

Start building the sandwich by putting tomato slices on the bread; next add bacon (alternating direction of slices, so fat and lean are not all one direction). Finally, place lettuce leaves on top. Lightly salt and pepper.

Pan-fry, sauté or baste the egg, making certain that the yolk does not harden (over easy).

Transfer the egg directly from the pan to the sandwich, on top of the lettuce. Make sure the yolk is positioned in the center.

Add the bread slice with melted cheese side down. Don’t push, or you will prematurely break the egg, and possibly create a large mess.

Transfer the sandwich to a plate that’s been slightly warmed in the oven.

With a serrated bread knife, cut the sandwich in half. The yolk will drip down each cut half, making a sauce.

Can this sandwich be improved? Well, I guess you could use pancetta instead of regular bacon, Brie in place of Monterey Jack, and homemade mayonnaise or aioli. But the thing I like about this is that it is not too far a stretch for the home kitchen. And if you are really going to get into a flashy ingredient trip, there are probably more interesting ways to use your time.

Just one precaution: Delicious it is, but it’s the messiest sandwich ever.